Building a PC isn't that difficult. We'll show you the basic steps you should take -- and where to find the best advice!
by Lampstradamus

So you want to be a be a PC Gamer. You've heard all of the amazing things about the world of PC Gaming, and you want to join -- but you're scared. Building a PC from the ground up can seem like the most complicated thing in the world. There are many parts and pieces to worry about, and it seems like a very complicated and intricate process.

Despite what most people may think: building a computer isn't rocket science. In fact, building a PC is actually way easier than you believe.

First of all, if you're on this article that means you have two advantages when it comes to building your PC.

Anything and everything you buy for your PC has a manual. If you're wondering what goes where the manuals will tell you what goes in what hole and where to mount it. Many parts and cables will only go in certain places; square pegs will only go in square holes.

If the manual isn't good enough to explain what to do, then you have a second advantage.

#2. You Have the Internet

Troubleshooting and finding instructions is easy as pie when Google is everyone's friend.

There are many websites and forums where you can look up instructions, manuals or troubleshoot your most difficult issues. You are never left without an avenue for information. The Build a PC Reddit is a great place to start. There are many people in there who are willing to answer questions.

The biggest benefit of being in an online society is the power of video. Making a PC from scratch with no prior knowledge back in the day probably would've been the worst thing, but nowadays, we have videos for everything, including building a PC.

There are many guides and videos by people in the PC community about how to build a PC. There is a playlist on Youtube called 'My First PC Build,' which is a nice, easy-to-follow guide for beginners. Advice on Preparing to Build Your PC

If you're actually looking into building your own PC, there are a few things that a beginner would love to have.

PCPartPicker is a great website to use for beginners. You can list out what parts you have or what parts you want, and the site will note any potential incompatibilities. The website will also tell you where the cheapest place to get the parts is, as well as list out the price history of certain parts, all super awesome information for the beginner.

Newegg is a good place to buy components. They have sales on components very frequently (much like Steam does for PC games) and sometimes they have bundle deals, where you can pick out several PC parts and buy them as a package, saving, even more, money.

Advice on Actually Building Your PC

When you're actually at the step of building your PC, grounding yourself on some metal (just touching any metal) before working on the parts is always needed. Some people suggest getting anti-static bands, but not everyone wants to get one. Regardless, you want to do this because it will discharge any potentially dangerous (for your parts) static electricity.

If you're installing the motherboard, make sure there are standoffs (basically little platforms, so that the motherboard isn't touching the case -- or else you might have an electrical short, which obviously isn't good.

One of the more stress-inducing processes of building a PC is installing the CPU into the motherboard. Make sure you're grounded before touching the CPU.  Also, when you're lowering the handle on the CPU after installing it, there will be some resistance, but make sure the CPU is in properly.

And of course, you'll have cables everywhere at this point.

Cable management is something that many seasoned builders prefer, and cases that provide spaces for this are nice, but unless your entire case is full of junk, cooling shouldn't be affected too badly. Essentially, cable manage if you can and if you want; however, it isn't a necessity.

Bonus: A Simplified Process: Step by Step (If You Need It) When you have all of your parts and tools for your first build, one of the most important things to have is space. You want to know where everything is and you don't want to lose any parts.

The next thing builders do when they're first building a PC is they install the CPU into the motherboard. Remember: Discharge any static electricity before touching the CPU!

Most people build the motherboard on top of the box it comes with just so that it isn't touching anything that may short it out or damage it. There will probably be a plastic cover over where your CPU will go, but this will come off when you install the CPU.

You'll be lifting up the arm on the motherboard's CPU slot to install the CPU. After this, match the notches on the CPU to the slot and make sure it fits correctly. As you lower the arm to lock the CPU in place, you will feel some resistance but if you put the CPU in correctly, it should lock in place.

After installing the CPU, you should install whatever cooling system you are using for the build, which varies depending on if you're going with a stock fan or something special. 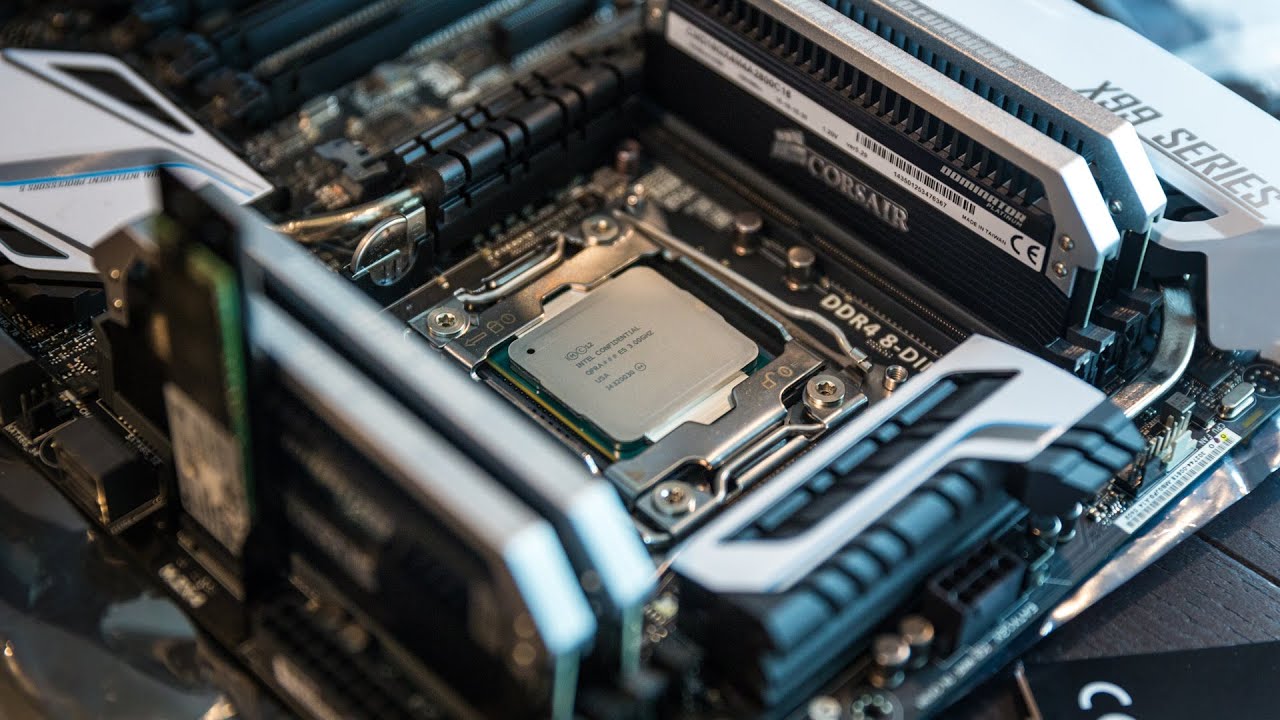 Then you can install the RAM. Most motherboards come with 4 RAM slots, and if you have dual sticks, you want to install them in matching pair slots (slots 1 and 3 or 2 and 4). Make sure the sticks line up with the slots, and everything should just click into place when you press down.

After this, you'll move onto your case. Install the I/O Shield before you install the motherboard. Find out the orientation of the board and how the I/O Shield needs to be placed by reading any manuals beforehand.

After this, you'll be installing things such as hard drives, video cards, power supplies, etc. Note: Video cards will require you to remove some shielding in the back of the case and will click in place like RAM.

Cases usually have dedicated places to put hard drives and SSDs. Usually, installing drives is simply a matter of using the right cables and installing everything in the right slots.

What's more, some cases have dedicated places to put the power supplies as well as holes where you can route the cables to power the motherboard, drives and video cards. Some cables are marked with what they are for, and you simply need to install them where they're needed.

You Can Build Your Own PC

Even if you know nothing about building a PC, you can build a PC. It isn't impossible. If other people can build a PC, then you know it's possible.You can always learn. No one knows how to build a PC out of nowhere.

You can always ask for help, too. No one is going to judge you for not knowing what to do In fact, many people in the PC building community encourage people to ask for help. So what are you waiting for? Get out their a build the PC of your dreams!

Have any other advice for beginners just starting their PC-building journey? Leave them in the comments below!