Sea Hero Quest, a mobile game designed by neuroscientist to study dementia is released in Android and iOS
by StratGamer48

Recently, UK researchers from University College London developed Sea Hero Quest, a free mobile adventure game that helps researchers to collect data about players' cognitive abilities based on gender, age, and location. They hope to find a better understanding of memory loss and degenerative brain conditions like Alzheimer's disease, and that correlations or other factors might be part of the equation.

We’re hoping to learn from the data how well people do at different ages, across men and women, and different places in the world and that will give us this really wonderful database.”

Many years ago, a sailor who used to sailed with his son (the player) had a lot of memory of the sea. They encountered different types of sea creatures in different seas and recorded them in a book. As time passed, the sailor aged and is suffering from memory loss. As the son, the player will need to sail around the sea and try to bring his father's maritime memory back. The player will need to draw and record whatever he encounters in the sea so he can bring it back to his father. 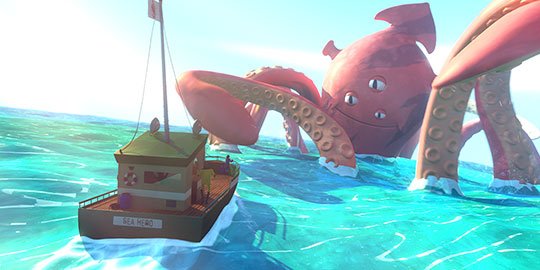 Screenshot of Sea Hero Quest as player is approaching a kraken

This game's purpose is to test players' cognitive abilities like navigation, decision-making, and estimating orientation. The only data the researchers receive are age, location, gender and result.

This game is an example of crowd science, which let the masses participate in major research. It is now available to be downloaded for free in Google Play and the App Store.