No Bias, no snark, just plain opinion on how Ubisoft did as a whole for their 2016 press conference at E3.
by Dalton White I

Last month gamers waited in anticipation for the E3 Press Conferences to wow us with what they have cooking. There were some solid presentations but also some cringe moments along the way. So basically it was the norm for E3.

Naturally, from forums to the live Twitch chat, there always seems to be a tremendous amount of competition between gamers who prefer different consoles. Sometimes it’s nice to see fellow gamers sticking up for their preferred systems but more often than not there are forms of bias, harsh words and annoying spammers present as well. For this set of E3 Evaluations, the plan is to comment and judge on the content and overall tone of the press conferences. Did they impress gamers and give their loyal fans something to look forward to or did they drop the ball this year? So without further ado, we ahead to the middle of the pack with Ubisoft.

It’s been a while since I posted my last E3 Evaluation and truth be told this press conference is partially responsible for that. Ubisoft’s press conference was easily the longest of those at E3 but that isn’t necessarily a good thing. As always, the energetic and charismatic Aisha Tyler hosted the conference and her energy and hosting experience did help move the conference along but it wasn’t quite enough. The opening with colorful dancers trying to get the audience hyped to Queen’s iconic “Don’t Stop Me Now” in the style of Just Dance was just a little too cheesy but did make it memorable.

The show lasted about two hours, maybe a little bit more and made a consistent effort at being zany, colorful and energetic but those efforts took away from the overall presentation. That isn’t to say that the presentation wasn’t ever enjoyable.

This year there weren’t that many shooters present in Ubisoft’s lineup but what they had were interesting. Ghost Recon Wildlands had a decent trailer. There seemed to be a huge variety of actions and travel available to players such as flying a helicopter and stealing motorcycles. The presentation during the trailer featured multiple players but the shifts in the different perspectives of the players was very jarring.

Naturally Ubisoft covered the upcoming content ready for The Division. Its presentation this year was a little lackluster, the game itself didn’t exactly get the best reviews on release and the audience’s enthusiasm seemed to reflect that. The expansion for the game titled Underground adds a new area to the game and there was a lot of time devoted to the free costumes and survival mode which felt rather awkward. Even with the clumsy vibe it seems that this expansion will have a form of “infinite replayability” so fans of the game will have something to be interested in.

Movies, Sieges and Snowboarding, Oh My!

There were plenty of games that that had both had the audience and myself interested. South Park: The Fractured But Whole has a fancy title but it seems to be a solid sequel the its predecessor. It seems that the comedy is focused on superheroes (and of course Marvel) and the battle system, environment and plot will be fresh and new in its own way. For Honor was a huge highlight of the conference with a fantastic trailer followed by some solid looking gameplay. It seems to bring the player through the entire siege process grappling up walls and fighting swarms of enemies. It looks gorgeous and has a unique style of fighting that feels natural and smooth.

As Aisha said during the conference it wouldn’t be an Ubisoft presentation without some Assassin’s Creed, of course this year the focus was on the upcoming film starring Michael Fassbender. The clips and trailer shown at E3 made the film look like something that fans may enjoy. It’s too soon to say for sure.

This year's E3 had plenty of VR content spanning over multiple conferences and platforms, not surprisingly as it is supposed to be the next step in gaming technology. Ubisoft had a bit of VR covered in its conference in the form of two specific games. Eagle Flight is an interesting concept with its use of players taking up the perspective of eagles in a post-apocalyptic Paris. The presentation was okay, the live narration seemed a bit awkward and clunky. For those Star Trek fans out there it seems that Star Trek VR is LeVar Burton approved. The game looks like it has potential as it designates a specific role for each of the players in the game. The visuals appeared to be a bit awkward from the small snippets of actual gameplay shown. Still for those who’ve always dreamed of being on the deck of the Enterprise this might be just what you’ve always wanted. Finishing up with Watch Dogs and Steep

The last two games making up the conference were strong but announcements felt like they both went on a little too long. Watch Dogs 2 made a solid impression as it seems to be taking a new direction and vibe as it travels to San Francisco. This is definitely a plus as it seems that Ubisoft Montreal is taking input from the negative reviews of the first Watch Dogs. The game seems to have a much lighter tone which can only be an improvement.

Steep was an interesting way to end the Ubisoft conference. The game looks gorgeous and seems to have a variety of winter sports to play: skiing, snowboarding and even wing suit flying. I couldn’t say that Steep ended the conference on a high point, but it was definitely not a low point. 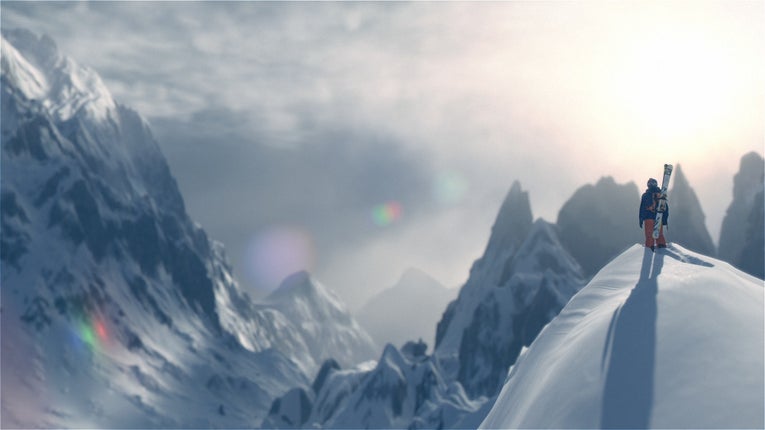 As a whole Ubisoft had its ups and downs like most press conferences at E3 do, but when compared to the other conferences this year it didn’t hold up as well. The event proved that just because a conference is longer, doesn't mean it makes the grade. Ubisoft didn’t totally bomb but they seemed a bit too stretched out over the two hours. There were some epic moments with For Honor and South Park: Fractured but Whole offered up some laughs along with some interesting and fresh new gameplay. For the final grade I’d give the Ubisoft conference a C/C+. Their solid games were undermined by their cheesy over energetic attempts at jokes and multiple low points with a bunch of facts about their games.

Do you agree with my evaluation? Any comments or arguments? If so, please leave a comment and stay tuned to GameSkinny for more E3 Evaluations and gaming news. If you haven't seen Ubisoft's press conference you can check it out on YouTube.