Seraph Review - Potentially everything you could want in a 2D game

Seraph brings back everything you love about 2D games, adds some Devil May Cry, and gives you hours of fun - just as soon as you figure the game out.
by Chrisator

Seraph is an acrobatic action 2D shooter, with a twist. With some cool double jumping, shooting and blinking, you can't help but get excited when you're surrounded by a dozen demons in every direction. The game takes a little while to get the hang of, and some of the features lack a proper explanation outside of the tips you see at the start of each level. You also get a scaling difficulty, some fun boss fights, and a crafting system you wouldn't expect from a 2D game.

You start off as Seraph, an imprisoned angel in the body of a human, To go with the motif, you also get three unique angelic abilities; a knockback, an exorcism and a pulsing light that boomerangs back and deals high damage. The non-linear nature of the game let's you pick your own goals; do you want to smash through the level, or kill as many Daemons as you can before you leave. The game also has a pretty nifty upgrade and crafting system, although you have to mostly figure that part out yourself (more on this later)

Don't worry, I won't spoil much!The story is given through a series of dialogues within the game, mostly at the beginning and end of each level. While this certainly adds some intrigue, the meat of the game is clearly in the combat style.

You start the tutorial as an Angel, in the body of a possessed human, who has been imprisoned in a special prison for a few decades, However, your guards have all become possessed and corrupted by daemons, and you wake up with no memory of the previous few months. To escape you need to kill all of all the Daemons, and retake your essence from within them. As you progress however, you learn more and more about what has happened since your imprisonment.

While the storyline isn't exactly phenomenal, it does take you in and get your curiousty rising. 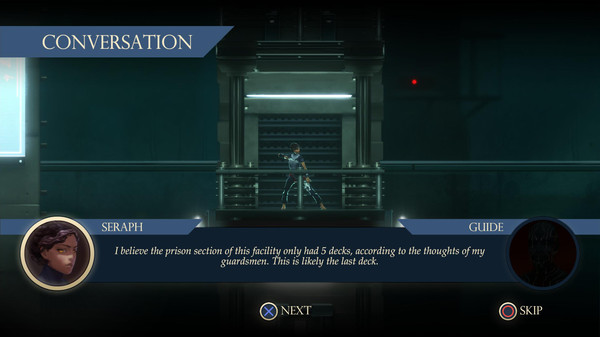 Definitely the most important part of the game, the action packed combat style is everything you expect it to be. The automatic shooting, combined with the high mobility of your character, makes for some heart thumping action.

There are issues however, after all, this is a game still very much in development. From monsters getting stuck, to blinking out of damage just to get hit again, there is certainly room for some fine-tuning. That being said however, the game still played far better than I first anticipated it to. 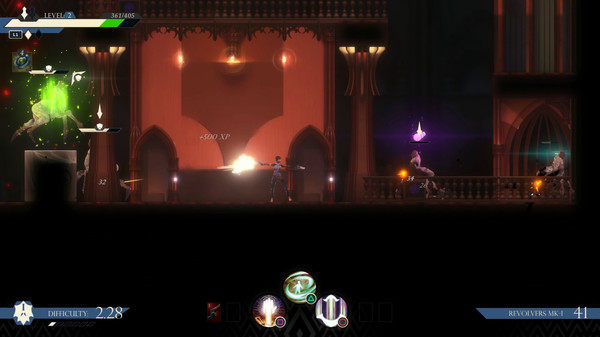 It took me a while to figure out the checkpoint system within the game, which should have been explained better in the tutorial. Basically, every time you die in the game, you respawn at the entrance of that level with a reduced max health pool, but everything else stays the same. This means that the monsters you've killed in the level stay dead, and you keep your XP. But, when you die multiple times in one level, you lose the game, and have to start over.

This is where the checkpoints come in - within each level is a locked door, which you have to unlock and get to quickly, before it re-locks. Within that door you find some extra XP, an upgrade shard, a damage buff, and a checkpoint marker, which becomes your new spawn location for that save.

Something I never expected from this game, was the intense fights you have with the stronger Daemons. Usually the last objective on any level, they slowly get more and more difficult to deal with, until you find yourself running around every corner trying to find a second or two to get your head back into things. Definitely the best portion of the game. 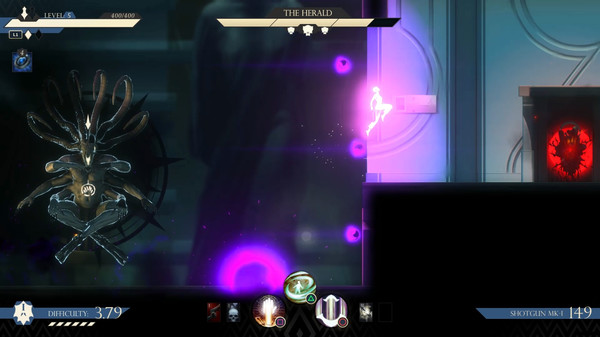 The game gets more difficult the better you play, and you can really feel this as you progress. From thinking "this game is too easy, I'll never die," to dying three times and having to start over, the combat mechanics certainly add a whole lot of spice to the game.

You can start off at a higher difficulty to give yourself a challenge, or go through a speed-run mode to power through things. I'd suggest only trying this after you've had gone through a few levels though.

Something I didn't like a whole lot, was the fact that you can only do upgrades after a level is done, or when you've lost. That being said though, having a crafting and upgrade system was something I never expected in a 2D game, so I'm still thoroughly impressed with the feature. You can pick up shard of varying rarity to upgrade three of aspects of your game - Munitions, Defensive and Holy - in a tier based system that requires a certain number of points in the tier before unlocking the next.

The crafting is a bit simpler though. After the tutorial, you have to unlock the Daemonsight ability, which let's you pick up crafting materials. You can use these materials to unlock new weapons and wards which you'll then have to pick up from lockboxes in the game, as well as passive Miracle upgrades. Some crafting items are still not available, but that's just what you get in an in-development game. 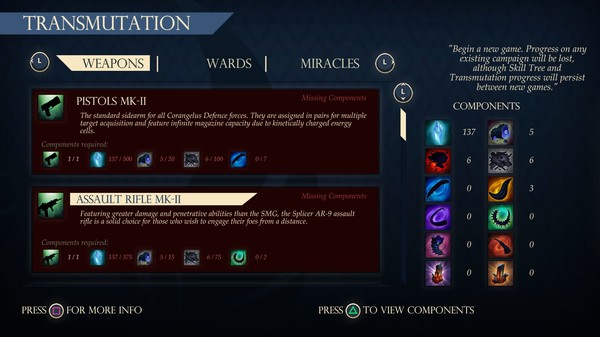 Considering the fact that the game is in development, and likely has so much more to offer, it is definitely worth $12.99. The action-packed combat system, the challenging boss fights, the crafting and upgrade system, all make the game worth at least one full play-through.

Our Rating
8
Seraph brings back everything you love about 2D games, adds some Devil May Cry, and gives you hours of fun - just as soon as you figure the game out.
Reviewed On: PC
What Our Ratings Mean