More often than not, remakes fail horribly. Oddworld: New 'n Tasty raises the bar for all that follow
by Glen Schoeman

Nostalgia is a funny thing. It has a way of distorting our memories, causing us to remember something being better than it actually was.

As a child, I was absolutely obsessed with the Teenage Mutant Ninja Turtles and I must have seen every episode and movie a hundred times, but recently when I tried watching one of the movies, I couldn’t even stomach sitting through the whole thing. The dialog was cheesy, the acting was horrible and the action sequences were laughable. It was one powerful kick right to the scrotum of my childhood.

When I first heard that a remaster of Abe’s Oddysee was in the works, I was legitimately worried that I had remembered it as a better game than it was and I was contemplating leaving my memories of Abe and his adventures intact as a masterpiece in my mind, especially considering that many remakes/remasters don’t live up to the quality of the original. I am very glad that I didn’t.

The plot is unchanged from the original. It follows our hero Abe, an alien living in a far-off galaxy, as he attempts to escape from Rupture Farms, the meat processing plant where he is forced to work as a slave, when he learns that his race are to be the next thing on the menu. In the process, he must attempt to rescue as many of his fellow Mudokons from bondage in order to help him later in the game.

As far as plots go, it isn’t particularly ground-breaking but it definitely has a certain charm. A few more pieces of dialog have been added onto the ones from the original and there are still very funny moments despite the very dark overtone of the game itself. Perhaps it’s the nostalgia but it still cracks me up every time Abe comically runs into a wall and hisses in anger.

The graphics have received a full overhaul and now sports a very flashy 2.5D view of the world. When the camera shows a close-up of Abe, we can see every tiny detail of his complexion. Although Abe’s Oddysee was pretty decent in terms of visuals considering the limitations in the late 90s, it is still great to see a beloved character get a shiny new resolution without sacrificing the look and feel that made the original so great. There is also a new feature that has been added that allows the camera to pan across as Abe walks as opposed to the flip-screen progression that was present in the original.

I was particularly grateful for this as I often remember getting surprised and brutally murdered by a patrolling slig when I played Abe’s Oddysee all those years ago. For the most part, the levels remain unchanged and even if you haven’t picked up the game in the last fifteen years, you may still remember where to go or where to locate some of the secret areas. There are, however, a few sections that have been changed up entirely in order to accommodate some of the new mechanics of the game.

As I mentioned, much of the game remains the same. There are still hard-as-nails puzzles that will make you swear that it can’t possibly be done by human hands. Timing still plays a major part in almost everything you do from rolling through meat saws to disarming bombs and armies of sligs, paramites, and scrabs chase you across the screen while you scream in pure terror.

Movement is still quite heavy and at times even feels like Abe is wearing ankle weights, meaning that it can take a few steps worth of movement to stop after a sprint and this regularly resulted in me skidding straight into a mine, sending tiny pieces of Abe flying across the screen. Because Abe is relatively defenceless, with the exception of the ability to possess sligs, the majority of the game involves running away, hiding in smoke columns or locating grenades in order to dispatch enemies.

There are, however, a few little tweaks that have been added just to get the veterans to leave their comfort zone and add a bit more tension to already very stressful situations. The main change being that Abe now has the ability to throw bottlecaps at any time which often means throwing them at the precise time, which can be very tricky, in order to avoid being riddled with slig’s bullets. In addition to that, difficulty can now be toggled and you have a health pool which means that depending on your setting, mistiming a run and being hit by a few bullets may not result in instant death. This does come in handy when your only option is to sprint past a sleeping slig.

There is also the ability to quick save at any time and I found that to be invaluable, especially when dealing with meat grinders that will obliterate Abe if your timing is a millionth of a second off. This can be accomplished by quickly pressing the touchpad on the DualShock 4, while quick loading requires you to hold it down. This can get frustrating when trying to load after a death and releasing too quickly, resulting in a save where you watch yourself die over and over again. This has also caused a bit of a stir with many of the purists but, to be honest, I played it on PC as a teen and I used to use quick save then too. On top of this, an additional feature has been added in the form of co-op. 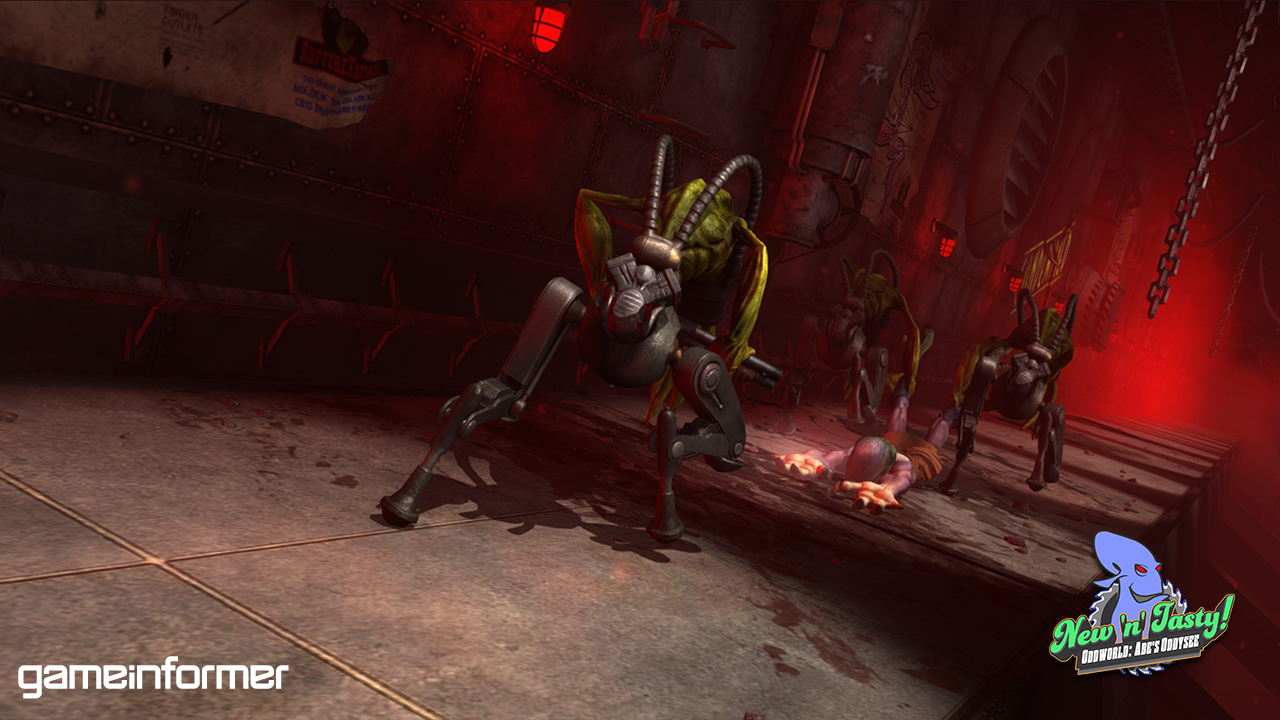 Upon starting the game for the first time, I was pleasantly surprised to see this option on the title screen but was quickly disappointed. It appeared to be a hot-seat type of co-op, similar to the old Mario games, where one player will have a turn and the other will play once player 1 has died.

Although this is true, player 2 picks up from the last checkpoint rather than the beginning of the level and felt a bit like being forced to let your younger sibling play your game rather than taking turns to each play your own game, as was the case with Mario Bros. This often led to me messing up and my wife learning from my mistakes, playing for longer sessions while I sat sulkily watching her.

Many games have failed horribly when being remade (cough, cough Thief) but Abe’s Oddysee is definitely not one of them. From the beautiful visuals to subtle changes that maintain the feel of the original, this game is a true gem.

If you never got the chance to play Abe’s Oddysee back when it was released in ’97, or even if you did and would like to take another crack at it, Oddworld: New n’ Tasty is well worth your time.

Our Rating
9
More often than not, remakes fail horribly. Oddworld: New 'n Tasty raises the bar for all that follow
Reviewed On: Playstation 4
What Our Ratings Mean