Dating simulation games are RPG visual novel games that allow players to experience dating more than one heterosexual AI (and sometimes homosexual too). This genre originated in Japan, spread across East Asia and is establishing a fanbase in North America now.

Some of these games can have 18+ content while some of them focus on platonic love. Although I have not played all dating sims, I have played enough to determine the pattern of most AI's behavior, structure and dialogue in generic dating sims. Let's take a look at common behavior.

The AI that the player is dating doesn't know about the player having multiple relationships or just doesn't care about it. In reality, most people would break up with douchebags that have multiple partners, right?

2. Takes too little time to go from stranger to soulmate

The time that elapses between the first introduction to becoming a soulmate and marriage only takes a month to a year. Yes, that stranger you talked to a while ago is will to sacrifice their life for you within a short period of time.

During conversation with an AI, players always have the option to choose what they are they going to say, however, options are very limited. In fact they're limited enough to make player seems like that they have mental issue because they will constantly wonder whether to break up, continue the relationship, or stay as friends during conversation. Why are the player only thinking of these? Are no other alternatives?

Also, in reality, couples have a lot to talk/argue about, right? 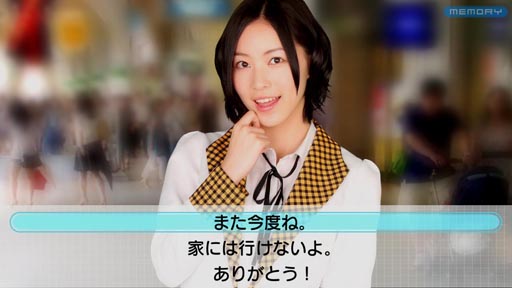 Screenshot of AKB1/149, dating sim featuring members from idol groups AKB48, SKE48, NMB48 and HKT48. The player chooses what to say. One option is going to take your relationship with her further and one is to break up with her Don't understand Japanese? Doesn't matter, this is a more radical example of choosing what to say. It is like the player is having a mental breakdown!!

Endings in these visual novels are a bit like pass/fail exams. If a player passes a certain point, you can get to a particular ending. For example, if the passing point for a good end requires 500 favorability, it doesn't make a difference if the player has 499 or 30 favorability on that AI. Passing will equal marriage and failing will result in a breakup.

All AI are blind materialists if there are gifting options!

AI will definitely love you more if you gift them a $10,000 necklace rather than 99 roses. However, giving them 99 roses would be better than buying them a $10 drink. Sometimes giving them 1000 $10 drinks can have the same result as giving them an expansive necklace.

In conclusion, games are different from reality. That's why players find them enjoyable because they are not totally realistic. Dating in real life has way more "algorithms" and factors and that's why playing dating sims are easier.