With Ratchet and Clank coming out into theaters this week, Joseph decided to see if it was worth the wait? MILD SPOILER ALERT
by Joseph Ocasio

Ratchet and Clank, two of PlayStations most iconic characters, finally made their movie debut. On paper, it seems like a sure fire hit--take a video game that already has the look and feel of animated film and make it into one while staying true to its source material. With charming characters, witty jokes and an endless amount of story possibilities within the created universe, surely one can make a good movie out of that. However, there's a difference between potential and execution, and that's where Ratchet and Clank the movie starts to fall apart. It's by no means a bad film, but Ratchet and Clank isn't going to break or crack the chain in the movie game curse.

Retelling the first game, Ratchet is a small-time mechanic who dreams to be part of the Galactic Rangers. They are heroes who protect the galaxy led by Captain Qwark, whom Ratchet Idolizes. When a ship crashes down near him, with a little robot named Clank, Ratchet must team up with his new friend and get the Galactic Rangers to help them save the universe from Evil Chairman Dreck. Sounds simple, right? 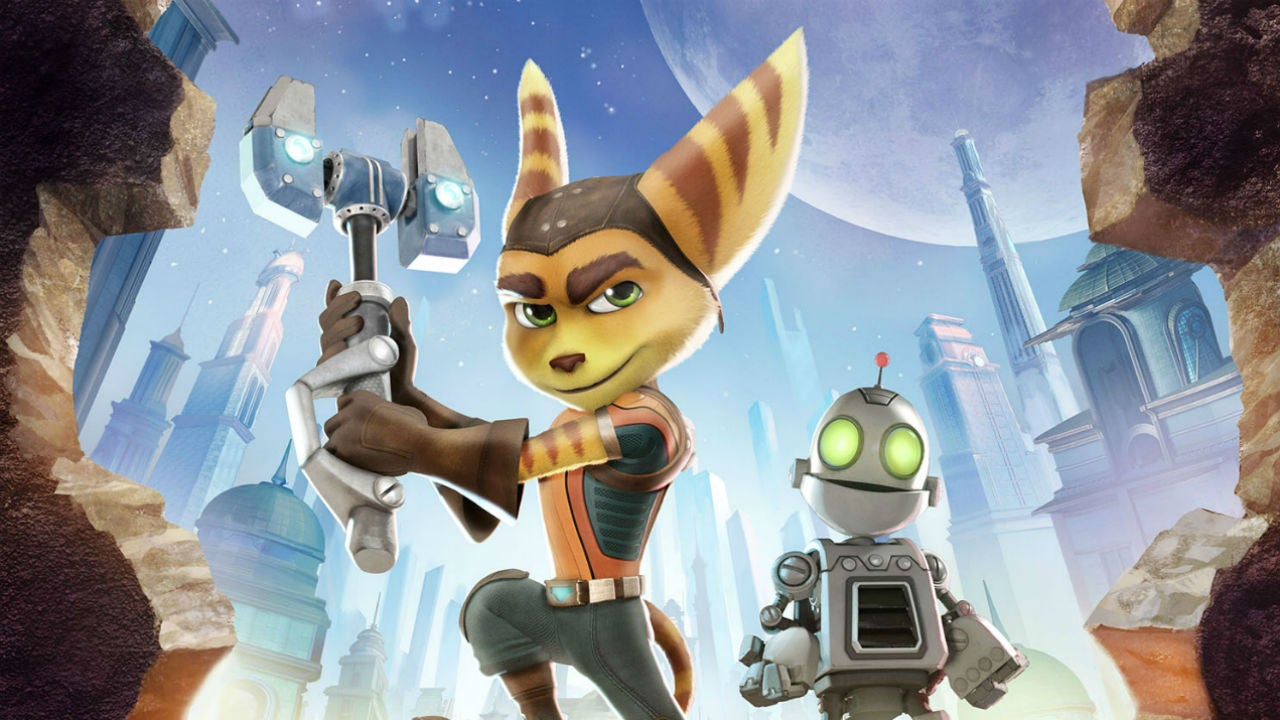 At its best, Ratchet and Clank is a harmless, inoffensive animated film that doesn't do anything new or unique with it's clichés. There's some funny jokes, some charming characters and a couple of winking nods to fans, but a lot of what Ratchet and Clank you've seen done better and more unique in dozen's of better films. If anything, the movie feels shallow in it's execution. There's little in dramatic attachment for these characters unless you're a fan or a young kid. That doesn't mean the characters are bad, most of them are fun and charming individuals, but there's no sense of growth or development for any of them.

That being said, the acting is still pretty solid. Paul Giamatti is clearly having fun as Chairman Dreck, even if it is a little over the top. Bella Thorne and Rosaria Dawson do well as the films two female casts, the straight face battle and the tech support. And while John Goodman and Sylvester Stallone aren't in it for much, they still do good jobs. Fans will also like that James Arnold Taylor, David Kaye, Jim Ward, and Armin Shimerman reprise there roles from the games.

There's even a few plot points that don't make that much sense and some of the humor is really, really cringe worthy. Without spoiling too much, a lot of the minions and henchmen in the movie mostly think that doing things like shouting every line there given is funny and there's a really unfunny running gag where some of them will be caught texting in the middle of one of Dreck's speech's. Speaking of which, at one point, for some reason one of Drecks right handmen, Victor Von Ion, wants to destroy Clank, when he and another Galactic Ranger member are near Drecks base, not doing anything with Ratchet and the other Rangers attacking the base because...... he's a defect? There are one or two other moments like that, but that be spoiling too much of the movie.

Animation wise, Ratchet and Clank is well made and beautify put together. The worlds and characters look great and the art design is creative. But, there are times where you can tell that there were some budget issues, particularly in the action scenes. Where robots should blow up into pieces, smoke seems cover them because the animators didn't have the money to animate them. The special effects in the fights aren't all that impressive either, again probably due to budget issues. It still good animation, but one that isn't that impressive.

And that's Ratchet and Clanks biggest problem, it just isn't very impressive. It's clear that a lot of love and hard work went in to making it both as a movie and stay faithful to it's roots, but it just doesn't doing anything to standout from the crowd. If you're a fan of Ratchet and Clank, it's worth checking out when it's on Home Video. But, there isn't that much recommended to see it on the big screen, even if it's at a discount price. Well, at least there's 3 more chances at a good video game movie this year. Maybe?

Our Rating
6
With Ratchet and Clank coming out into theaters this week, Joseph decided to see if it was worth the wait? MILD SPOILER ALERT