MapleStory 2 Review: MMO or Fast Food? Who Knows, It's Tasty

MapleStory 2 is far from a hardcore game, but it's got too much to it to ignore if you're in the mood for a softer MMORPG experience.
by Ashley Shankle

I'm not sure if there's a term for it, but I'm one of those people that bounce from one MMORPG to the next after a month or two. I'm not proud of it, but that's what happens.

For full transparency, I held off on reviewing MapleStory 2 for three reasons:

If you've played Korean MMORPGs before, you can probably understand the first two points. Generally, in Korean-developed MMOs, you get to some heavy enchantment grinding at endgame and, regrettably, run out of PvE content fairly quickly unless you are just set on grinding enchants.

MapleStory 2's primary focus is hanging out with other people, which can be done in any number of ways. You can run dungeons, farm world bosses, or grind a map with friends -- you know, the normal stuff -- but it goes deeper than that.

It's very easy to find yourself spending more time messing around with what would normally be considered "optional" in other MMORPGs.

You may get wrapped up in multiplayer minigames, perhaps even hosting your own to play with friends. You may wander into a lower channel for the performance map Queenstown and end up chatting while other Maplers play music. Heck, you may even decide to play some music on stage yourself.

The amount of activities found in MapleStory 2 is a little staggering, especially if you installed the game to get your regular grind on. There's a big difference between rushing through Epic quests for levels, and running around every map you come across to complete "Exploration Goals", such as hitting enemies with widget trees or finding chests just to get more attribute points. 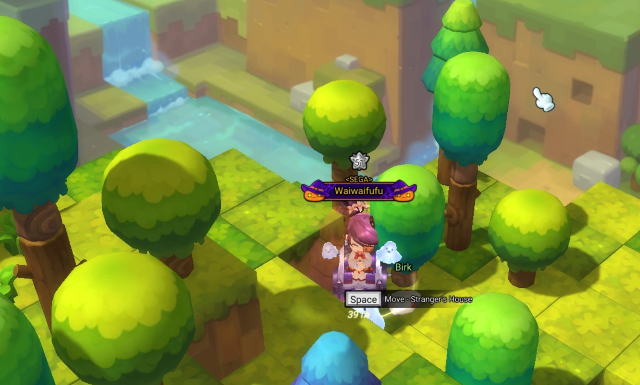 Since everything you do (just about) grants XP, you don't have to level via Epic quests. Playing music, gathering, playing minigames, crafting -- almost every activity you get yourself into in this game grants XP. This means you never have to level two characters the exact same way, though Epic quests are easily your best source of XP up to level 50.

There are also several PvP maps in the game, though at the time of this writing there isn't much incentive to wail on other players. Some Epic quests near the end of MapleStory 2 send you into a small handful areas, but you can channel hop your way to safety and just get the objectives done without the stress.

You can't talk about this game without talking about user-generated content. And you have to bring Merets, the cash shop currency, into the discussion when you get to the nitty-gritty of it.

One natural assumption is that a Nexon game is going to be a little demanding on the wallet if you want to get serious with it; however, that is not the case with MapleStory 2.

I'm not going to lie and say there's nothing to be gained from spending money on the game in a gameplay sense. The in-game cash shop, the Meret Market, has some gameplay-affecting items such as the badge that automatically gathers for you when near nodes or the ability to send messages in the World chat channel, but as it stands, that's about as far as it goes.

You'd be surprised how big you can make your house and how many items are available without spending a cent.

This doesn't mean you're not going to be spending money on MapleStory 2, though. Oh no. Instead, it means you're going to want to throw tons of money at cosmetics, both official and those made by other players.

In Maple World, players are able to create their own cosmetics for use as character clothing and items or blocks used in player housing. There's a whole pile of templates to work with, and skilled UGC creators roll in Blue Merets, one of the two cash shop currencies, as UGC can be sold to other players in the Design Shop.

Creating cosmetic UGC costs Red or Blue Merets when purchasing the template. Red Merets are granted via events, meaning even free players can dive into the UGC pool and make Blue Merets on the Design Shop.

There are other venues for UGC in the game, too, such as scheduling images to display on signboards for Blue Merets or playing your own music via an instrument at only a Meso cost. But these are less notable than the use of the Design Shop or simply making your own clothes.

The Trail to and Making Camp at Endgame

I don't think I mentioned it yet, but leveling in MapleStory 2 is incredibly easy. So easy in fact, that you could hit max level in a single day just by pushing yourself through the game's story via Epic quests, then throwing yourself at level 50 world bosses (Heartless Baphomet keeps dinging me) to hit 60.

If you want to skip the typical MMO progression treadmill, you can do any number of other things to level. The best AFK leveling method is to auto-perform music, and fishing is basically only good for trophies until you max it out.

Everything in MapleStory 2 happens very quickly and simply, sort of like MMORPG fast food.

None of the classes (but thief) are all that hard to play, with most class strats coming down to spamming one or two skills with the others being situational. This doesn't make the game less fun -- dungeons are short and relatively easy, requiring players dodge their way to safety on a regular basis -- but it's notable if you're looking for a more hardcore game.

At the time of writing, endgame boils down to running dungeons to get good enough gear to push your gearscore up to 2100, after which you can run Hard mode dungeons -- and will probably just grind Fire Dragon until Chaos difficulty arrives.

You can only do so many dungeons in a day and in a week, with that limit being raised in November. Currently, players can only run 10 dungeons per day on a single character, and 30 total a week on a character. After the next big update, players will be able to reset the weekly limit on one character per week.

You can get around the dungeon limit by making alts, which is very easy, and grinding out the limits on them as well. If you get serious about the game, you're going to be doing this to try to get Epic-tier equipment. Epic equipment, by the way, has an incredibly low drop rate, so good luck.

Aside from dungeons, you'll also be doing daily quests and fulfilling 18 Daily Missions, which grant a whole host of necessary items and should ideally be completed each day. Daily quests are a separate entity and found in Queenstown.

All this together builds a not-entirely-interesting endgame but MapleStory 2 is more about the journey than stats. You can rush your way to endgame if you want, but you can also take your time and just explore your way to max level if you want.

I said before, MapleStory 2 is sort of like MMORPG fast food, and that's something I've felt since I started playing. It's easy to get into and tasty, but not filling.

The best way to spend your time in MapleStory 2 is to join a guild that you get along with and just have a good time.

Nothing in the game is all that pressing, and it's built with so many ways to just relax and socialize that it almost feels mandatory to spend some time with other players.

Don't believe me? Go hang out in Queenstown on Channel 1 or 2 and start a conversation with others near the stage -- you may be surprised. Or even just go to a relatively populated area and start performing -- if the song is good or familiar, you may get other Maplers commenting on it.

Now, I will say that your time with this game will be short if none of the classes click with you. You have to try them out, maybe read some guides. When you're making characters, the previews don't give a great idea of what they play like, but they play (see: spam) differently enough that it makes a huge difference. I did not enjoy my time with MapleStory 2 as much before Runeblade came out, but after? Yeah, I'll play this for a few hours at a time. Why not?

MapleStory 2 didn't do too hot in South Korea, so only time will tell if the game can survive globally. If Nexon can keep events rolling to keep the game fresh,  global may have a bright future. If not, well...

As it stands, MapleStory 2 the perfect "between" MMO. One you can come to after you're tired of raiding in WoW or getting mad at Black Desert Online and just want a game you can still get that little endorphin and adrenaline rush, without the stress or pressure.

[Note: The developer provided a copy of MapleStory 2 for this review.]

Our Rating
8
MapleStory 2 is far from a hardcore game, but it's got too much to it to ignore if you're in the mood for a softer MMORPG experience.
Reviewed On: PC
What Our Ratings Mean