This is the stuff of nightmares, straight from the depths of Subnautica.
by Engela Snyman

With all its depth, so to speak, Subnautica has practically cornered the market for all deep ocean adventure games. But let's face it, one of the biggest reason why we love this game is for its monsters. Some are large, some are tiny. They can be creepy or beautiful, awesome or simple. And they can be very, very deadly. Without them, Subnautica would be as empty as space.

So to celebrate these awesome - yet terrifying - animals, here are the top five creepiest monsters of Subnautica.

"A combination between a leech and a tick."

Whoever thought that up should be strung up by his coding fingers and left for the sharks.

These little monsters attach themselves to the player's arm and steadily drink them dry, making them weaker as time goes on. Small, fast, and annoying, they can be found in the Kelp Forest regions and the Sparse Reef area, and they like to move in large groups - oh joy. Seeing as there is no fire under the sea, these delightful little blood packets can only be removed by beating them to a bloody pulp -- literally -- or by swimming for a long distance.

Although small in stature, their large jaws and wriggly bodies make them a creepy annoyance of the worst kind. 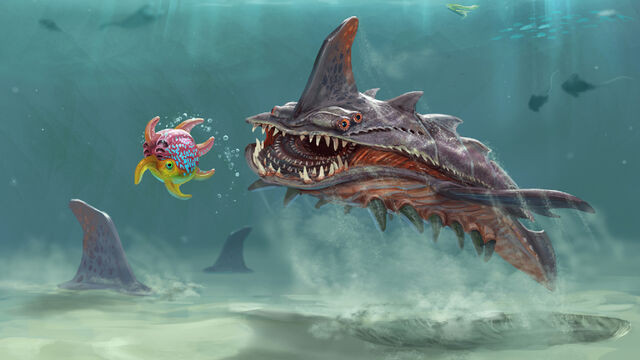 It's like a trapdoor spider, with five rows of teeth. With a face only a mother could love, the Sand Shark hides itself deep in the sand. When food -- or an idiot -- swims by, it will jump out and rightfully chew their faces off. Fighting it is like trying to ward off pure muscle attached to razor sharp teeth, but thankfully the Sand Shark isn't too fast, and swimming to shore shakes it off.

It lives in the Grassy Plateaus and Dunes, and is a solitary creature by nature. But be warned: even when it's dead don't get too close. In the immortal words of Lady Eboshi:

"Cut off a Sand Shark's head and it still has the power to tear yours off." 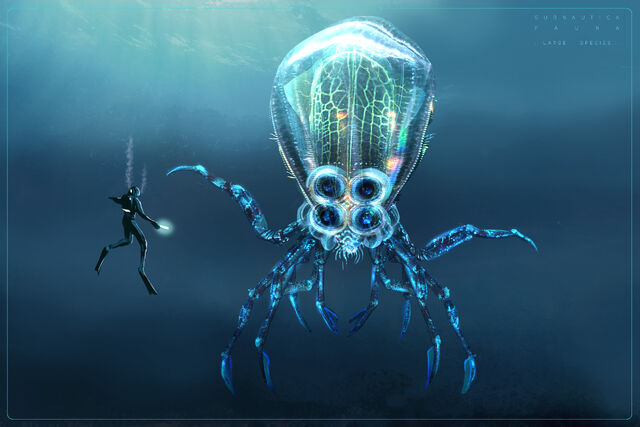 It's a crab with a squid head...do I need to say more?

The Crabsquid -- which has a very original name -- is as much alien as it is creepy. With spider-like tentacles, four beady eyes, and a squishy body, it's a freaky thing of nature with quite a lot of bite. They follow light sources, and if you try to run they will give chase. And they are titans. They can be found in the Blood Kelp Zone and Deeper Grand Reef area, where they float aimlessly in search of smaller animals -- or convenient divers -- to chew on.

In general they won't attack without provocation, but it's the principle of the thing: crabs and squids should not be combined. 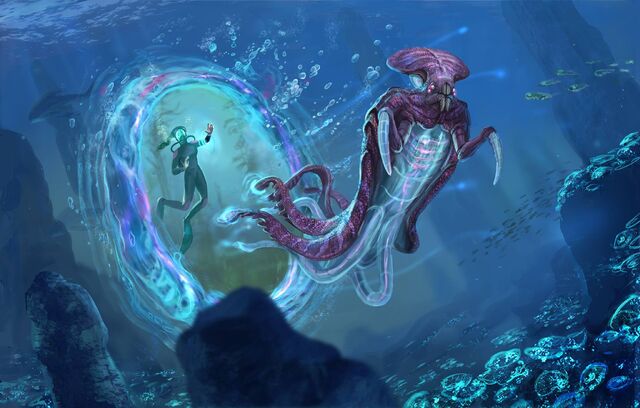 The Warper is an alien-like creature resembling a Cthulhu worshiper with mutant powers. Eerie and alien in their appearance, they have the ability to teleport themselves away from danger. Or teleport the player away from them.

The problem is they tend to throw you to a random location. And with the amount of monsters just ready to eat you up, it's little wonder why these things will make most players nervous. The Warper is pretty smart -- it can teleport to intercept prey, and can't be captured by stasis fields. It'll just teleport out. Thankfully they're not too aggressive, but they are still safer to avoid.

Later patches will enable players to follow the Warper through its own teleport, which should make for some interesting game play.

For all intents and purposes, the Reaper Leviathan is the terror of the deep -- a large dragon-like creature with sharp teeth and a wicked temper.

Its size and sheer power already commands respect, but it is the prospect of being caught alone, without any ship or weapons, that makes it terrifying. If the Reaper grabs you, it simply swallows you whole, with no shits given -- instant death. It usually circles you for a time before trying to attack, and it likes to sneak up from behind.

The Reaper hits to kill, knocking out 80 percent of your health in a single bite, and can destroy ships or even bases. It's just one big hellstorm of trouble once it sees you. But the worst part is that screech -- when you hear it in the deep, you know what's coming.

That wraps up our list. What other creatures in Subnautica give you nightmares? Let me know down in the comments!