The biggest names in eSports: Who is on top and who is on the rise

With the world of eSports rapidly expanding, it can be difficult to follow all the teams and keep track of tournament results. Plus, teams are created, disbanded, and changed every season making it even more complicated.

Don't you worry though; I have you covered.

By looking at tournament rankings and team earnings, I have made list of all the top teams across multiple eSport games to find out who is on top, and who to look out for.

It is almost impossible to discuss League of Legends eSports without mentioning SKT. They absolutely dominated the 2015 World Championship by only losing a single game, and remain the only team to win two championship titles. SKT is well known throughout Lol eSports as the strongest team, and for good reason. With power players like Faker and Marin in mid and top lane respectively, it is hard for any team stand against SKT.

Check out this highlight video from 2015 Worlds to see just how skilled Marin is.

Even teams who manage to shut down one of SKT's star players often lose to superior strategy, and the overall strenght of SKT as a team. There is no doubt that SKT will remain on top until other regions step up their performance.

With over 10 million dollars of tournament earnings -- more than double the next highest team -- and winning the Dota 2 International Championship in 2015, it is easy to see why Evil Geniuses (EG) makes the cut as one of the top eSports teams.

Continuing their success, the team also took 1st place in The Summit 4 tournament last December, and Captain's Draft in January. With an undefeated record thus far, EG shows no signs of slowing down.

Here is clip from Captain's Draft game 4 vs Vega, showing just how strong EG is.

EG no doubt attributes their success to their mix of excellent leadership and mechanics. The team also consists of a good balance of veteran Dota players such as Clinton 'Fear' Loomis and Saahil 'Universe' Arora, and fresh talent like Syed Sumail ' Suma1l' Hassan.

Not only does EG have a strong team, but each individual member is incredibly skilled on their own. Many members of EG top the leaderboards. 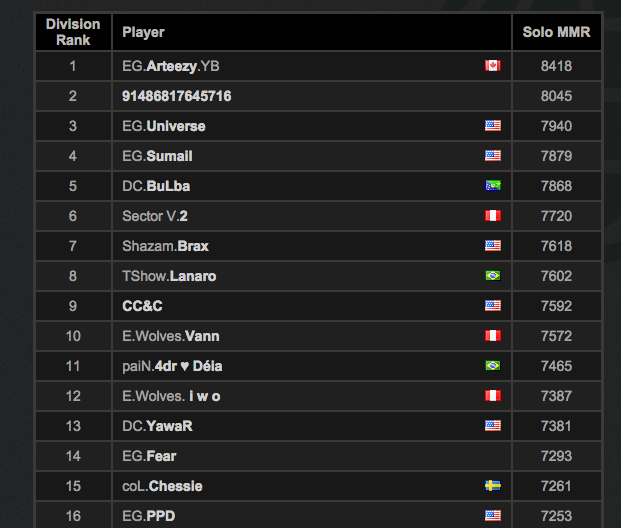 While olofmeister isn't the only member of Fnatic's CS:GO team, it is hard to deny his impact on his team's success. Named best CS:GO player by PC Gamer, olofmeister is one of the game's most versatile players. He is labeled as Fnatic's secondary AWPer, but olof has proven himself to be effective with all weapon types.

As for the rest of Fnatic, they remain the top team, earning almost 1.2 million dollars in over 90 tournaments. This should come as no surprise, since Fnatic took first in the last 10 tournaments.

Like previous teams on this list, every player on Fnatic is scary in their way. Each member has the skills needed to reach the top of the leaderboards, and they continue to improve -- both as individuals and as a team.

Much like the image above, the Immortals (IMT) are a new, mysterious group that has emerged in the League of Legends pro scene. When the team was founded at the end of 2015, the announcement stirred up the NA region. IMT is made up of an all-star line up, and is expected to be the strongest team coming out of NA this year. Every member of IMT is an experienced player, and many have come from top-tier teams such as TSM, CLG, and Fnatic.

However, what makes IMT so interesting is their performance in the NA LCS. They exceeded expectations by going 10-0 during the Spring split and took out NA's best teams with ease. Perhaps they will be the next team to take on other region's best like Korea's SKT1 or China's LGD.

NA is known as the weakest region for LoL eSports, but IMT wants to prove otherwise.

So follow IMT's standings over at LoL eSports and show some support.

While not as experienced as other big-name Hearthstone players, Ostkaka earned his place at the top of our list because of his recent triumph at the 2015 World Championship. Using Oil Rogue, Grim Patron Wrarrio, and Freeze Mage decks, Ostkaka took first place in the Championship and earned his first major victory (and a $100k reward).

This is quite the accomplishment considering the fierce competition. Ostkaka managed to beat Hearthstone veteran, ThijsNL; which was a surprise to many. Below is small clip that demonstrates Ostkaka's quick thinking and ability to create unique strategies.

Prior to the Championship, Ostkaka had little tournament experience so he is still new to the pro scene. He is definitely a player to look out for in future competitions.

In you follow SMITE's eSport scene, then Epsilon Esports should be a familiar name. They may not be the most profitable team, but their recent success has placed them at the top of EU standings.

The team had an explosive season during Fall of 2015, where they went almost undefeated with an impressive 27-1 record. No other other teams came even close to that record. Epsilon also managed to win the 2016 World Championship in January.  Even more impressive, they swept Team Enemy during the finals with a 3-0 record.

With head coach, Youngbae, guiding the team and offering support, Epsilon Esports shows no sign of letting up.

But what better way to learn about a team, than to hear them for yourself.

For more news and updates, check out Epsilon's official website.

Continuing with the SMITE pro scene is Team Enemy. Despite poor performance in the 2015 Spring Split, Enemy deserves recognition for their stellar gameplay during the the 2016 SWC. Even thought Enemy was considered the underdog, they managed to make it all the way to the finals, where they lost to Epsilon Esports.

If you missed SWC, here is game one of Enemy vs Epsilon

Team Enemy has an interesting history behind them because much of the original team is gone. After losing the several games during the split, team captian, PainDeViande, made last-minute roster changes and replaced every member of Enemy. This decision created a backlash from the community, but the results were worth it.

After the roster changes, Enemy demonstrated their new strength. They beat TSM and EnVyUS during the Super Regionals, and secured a spot in SWC 2016 as second seed for NA.

Proving themselves as a top-tier team, Team Enemy is a team to look out for in future SMITE tournaments. For a more detailed team history, visit Team Enemy's official website.

Another upcoming CS: GO team to look out for is Natus Vincere. According to ESL's world rankings, Natus Vincere ranks second best in the world, just below Fnatic. The rankings are decided based off placements in tournaments, as well as individual player performance.

Moreover, Natus Vincere ranks in top for most earnings in CS: GO with a total just short of $600,000.

While Fnatic remains the dominant team in CS: GO, Natus Vincere is still a team to look out for in upcoming tournaments.

Since the Dota 2 pro scene is so intense, it is tough to decide who is truly the top team; However, given Team Secret's performance in 2015, it is safe to say they rank as one of the best teams in Dota 2. Team Secret took first in five premier tournaments (which all had a prize pools greater than $200,000) and were runner up in The Frankfurt Major 2015. That's some serious cash.

While Team Secret's rise to the top has been quick, it isn't that surprising.

The team consists of players that used to belong to Fnatic, Natus Vincere, and Alliance so each player has experience in eSports and playing competitively. But don't take my word for it because their gameplay speaks for itself.

Team Secret's website is currently under reconstruction, but they still provide links to all their social media, so don't worry.

I couldn't write an eSports list without including Starcraft 2. SC2 and its predecessor helped make professional gaming a reality. So with that, I present one of the best, and most-liked SC2 players: Jang 'MC' Min Chul

MC is widely known in the eSports community as the best Protoss player in the world. With a record spanning over four years of competitive play, it would be difficult covering all of MC's accomplishments. But among his best victories are winning the Global Starcraft 2 League twice, 2011 DreamHack Stockholm Invitational, Copenhagen Games Spring 2011, HomeStory Cup IV and IEM Season VI - World Championship. A record like that explains how MC earned over $500,000 during his career, which is more than any other SC2 player.

Although MC retired in 2015, SC2 players can still learn by watching his gameplay.