Final Fantasy IX: Why You Should Play It Now.

With the Final Fantasy series on the rise again, now is the perfect time to take a look back at where the series has been.
by vegna871

Most of the Final Fantasy chatter on the internet these days is about the newest titles, XIV, XV, XII - Lightning Returns. Some of the talk also turns to the recently re-released VII, or the soon to be remastered X. However, the series itself is full of classics and now is the perfect time to discover them. for the many that haven't played Final Fantasy IX, now is the perfect time to get started. This "review" will give you a bit of spoiler free background on the game, and give you a few reasons why it's good to play it now.

Final Fantasy IX was supposed to be a return to form for the series. With the two installments before it, VII and VIII, being a large exploration of new ground for the series by adding a lot of sci-fi to the series, the developers thought it was time that Final Fantasy became centered on fantasy again. They brought back the idea of the crystal, which had been a central idea in the first five installments of the series, but had been largely M.I.A. since FFVI, though the way they use it is very different from any way they've used it before.

They also bring back a sort of class system that the other two 3-D Final Fantasies lacked at the time.  This class system gave each party member a specific role they were adept at, and defined that party members skills by that role. For example, the main character, Zidane, is a thief by trade, the game also gives you a black mage, white mage, summoner, dragoon, knight, blue mage, and monk. Some of these classes hybridize other famous Final Fantasy classes into them. For example, the monk party member also utilizes the ninja's famous "Throw" command, allowing you to throw unwanted Weapons and certain other items at an enemy, dealing damage based on what was thrown. This sort of class idea was also explored somewhat in Final Fantasy X, although each characters role was very customizable. 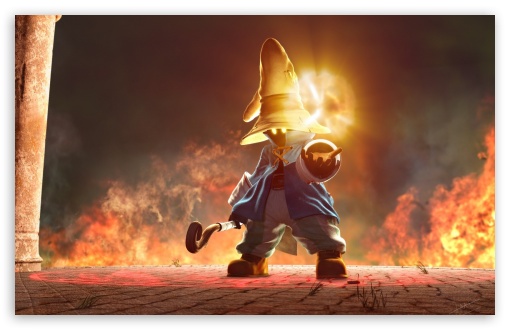 One of the central themes around the game is theater, and it's very evident in the story, both literally and metaphorically. The game takes place in three acts. The first act I simply refer to as the opening, which both acts as an exposition to most of the major characters and the world you are in, while providing it's own conflict that largely resolves itself by the end of the act. The second act, which I call the exploration act, revolves around the group discovering secrets about the world and about themselves. It also ties up all of the loose ends left over from the first act, and ends with an epic battle that kicks off the third act. The third act is what I refer to as the conflict act.  In it, the main villain begins to ramp up final plans. The party also learns what the main villain's plans are and what the motivation behind them is. The main character also discovers a few secrets about himself along the way.

The characters are all quite dynamic, each has their own unique motivations, and each has a trial to overcome. Many of these trials create a lasting impact in the way the character acts throughout most of the game (one notable exception is tied to the story of Act 1, and is almost completely resolved by the end of the act).  There is no character without an interesting story, and a large part of the enjoyability from the plot comes from seeing how so many people from different strokes come together to fight for a common cause.

The gameplay is largely standard Final Fantasy fare. You have your ATB gauge, each character has sets of abilities they use in battle in addition to standard attacks, and the fighting is largely turn-based. a few changes were made to the last several games. Mainly, only a certain few characters can use magic, other characters get other abilities that largely make up for the loss of magic and give the character a set role in the party. There is a sort of limit break system in this game as well, but it is different. Called Trance, a character activates it after filling a pink gauge below their ATB. Like VII's limit gauge, the Trance gauge is filled by taking damage, however when it fills, rather than granting the character a new set of special powerful moves, it alters something the character can do. The black mage can cast two different black magics in a single turn, the knight gets a significantly enhanced attack power, the dragoon stays in the air for a time after jumping, getting several lance throw attacks out while remaining invincible.  The thief, Zidane, does get a new set of attack that are quite powerful, but he is the only one. Trance generally lasts two turns.

The ability system is equipment based.  Each piece of gear comes set with several abilities.The character wearing the gear can use any abilities native to the gear, so long as they are something the character is capable of. A thief cannot use white magic, nor can a female learn the Protect Girls Set Ability. If the character wearing that ability can learn them, he will gain AP towards mastery after each battle. Once mastered, the ability can be used at any time.  The game also has several "Set Abilities." These are passive skills that make some minor alterations to the way the character behaves in battle, and use a character's native CP, or Crystal Points, to activate. For example, activating High Tide costs 8 CP, but drastically increases the rate at which the trance gauge fills. Activating Bug Killer costs a mere 2 CP, and makes the character deal more damage against a less common enemy type.

The game has several sidequests, like most Final Fantasies, and much like VII the main one involves chocobos. The sidequests are fun and engaging, and the chocobo sidequest is highly rewarding. It also has a very involved and very difficult card game much like Final Fantasy VIII. The game also feature an excellent soundtrack. The songs in the game always set a great mood, and a little bit of jazz influence in some of the city music goes a long way.  Obviously the graphics aren't anything special by today's standards, but they were pretty great for their time, and possibly the best on the PSOne.

So why should I play it now?

Well, the simplest reason is that many people that just bought Final Fantasy VII on Steam are probably very close to the end of it.  Those looking for another dose of Final Fantasy would do well to check out IX. Of the several reasons behind this, perhaps the best is that it's sidequests make it familiar to VII fans, while providing a different setting, and also bridging the gap between VII and the soon to be rereleased X. Some might just want to check out the classic Final Fantasies they've missed after having only played X, XII, or XIII. Or maybe the recent announcement of XV have players wanting to check out the series for the first time. No matter how you slice it, IX is a wonderful place to break into the series, whether it's your first Final Fantasy or your fourteenth. It is currently available for $9.99 on the Playstation store, and you can play it at home on your PS3, or on the go on your PSP or PSVita.

Our Rating
9
With the Final Fantasy series on the rise again, now is the perfect time to take a look back at where the series has been.