Yo ho ho... it's a pirate's life for me! As long as I have a hogshead of Appleton Estate Rum on me galleon!
by Eli "The Mad Man" Shayotovich

Ahoy mateys! Welcome back to another episode of - at least for this week... Get Skallywagged: A Game & Booze Pairing Guide! Aaaarrr!

Over the last few weeks I've been running around the house swigging rum and talking like a pirate. I blame Assassin's Creed IV: Black Flag for my evolution from a fun-loving game writer (I refuse to label myself a "journalist" since I'm no such thing) into a despicable pirate.

I think I went a bit too far when I called my wife a wench though. Hey, at least I haven't tried to perch on top of my roof and swan dive into... well, a pile of snow here in Colorado. To be perfectly clear... I'm sucking down rum as I write this in order to: 1) get into the spirit of the article, 2) fight off scurvy, and 3) keep my ass warm. It's been so cold in Colorado I desperately wish I was walking across a warm beach in Jamaica searching for booty. The buried treasure kind of booty... perverts!

Yo ho ho and a bottle of rum!

Rum was the beverage of choice for every pirate, so it became the defacto pairing for Black Flag. In fact, when I mentioned I was writing a "Get Fragged" entry for this game a number of people said "It better be rum!"

But... what is Rum exactly?

Rum [noun /rÉ™m/] is a distilled alcoholic beverage made from molasses or some other fermented sugarcane product or sugarcane juice. After fermentation the liquid is aged in oak barrels.

The majority of the world's rum comes from the Caribbean and Latin America, but it's produced around the world. Since no standards exist for what constitutes rum, it's been left to the various nations that produce the spirit to define it. All these different definitions can (but don't necessarily) include the spirit proof, minimum aging, and naming standards.

I love rum. Rumy, rum, rum. Here it goes down, down into my belly!

The aging process produces various types of rum, like light (aka "silver" or "white"), gold (or amber) and dark. The color difference comes from the amount of time spent inside the (usually) charred, white oak barrels used for making Bourbon whiskey.

Spiced rum gets its flavor through the addition of spices like cinnamon, rosemary, aniseed, or pepper. Flavored rums are infused with fruits like banana, mango, orange, coconut or lime, and are usually less than 40% ABV (80 proof). Overproof rum is higher than the standard 40% ABV (80 proof), with many as high as 80% (160 proof).

The broadly accepted time frame for the "Golden Age of Piracy" ran from the 1650s to the 1730s.

So what's the deal with pirates and rum? In 1655 the British Royal Navy captured the island of Jamaica and soon discovered the joys of locally produced rum. It didn't take long for them to change the daily liquor ration given to seamen from French brandy to Jamaican rum.

Over time rum became very valuable as a trading commodity with British privateers (like Edward Kenway). When those privateers became pirates their fondness for rum didn't just vanish.

Add Robert Louis Stevenson's Treasure Island (published in 1883) to the mix and a pirate's predilection for rum was solidified forever.

The leading maker of rum in Jamaica has been around since 1749. Two hundred and sixty four years is a long time to be in business, which means Appleton Estate knows rum. Check out the website for their history and special distillation methods.

They produce a number of different rum lines, so let's go with a standard that - if you're going to be a pirate - must be in your liquor cabinet: V/X.

V/X is bold, fruity, and spicy. You'll pick up hints of banana, orange peel, some molasses, and the tiniest hint of copper. The burn at the back of your throat is from the alcohol.

This "burn" makes V/X a top-shelf mixing rum as opposed to a straight sipper. My choice of mixers with most alcohol is ginger... ale, beer or muddled. But if ginger doesn't float your boat, check out some of these many recipes using Appleton, or watch a video on how to make a Jamaican Delight.

Rum is to piracy as eggnog is to Christmas

Let's be honest, the numero uno reason to get loaded to the gunwalls on Rum Runners while playing Black Flag is simple: rum is to piracy as eggnog is to Christmas. To drink anything else while playing this game would be a heinous crime worthy of walking the plank.

The land portions of Black Flag are similar to other Assassin's Creed games. Havana, Nassau and Kingston are smaller than Rome or Constantinople, but you still clamber up buildings to reveal chests, taverns (to drink in, play games and recruit crew members), stores and side quests (i.e., assassination missions and warehouse raids).

All that running and climbing works up a mighty big thirst, so my Edward Kenway spends a lot of time in the taverns drinking rum.

Here's a little trick: have five drinks and... well, I don't want to spoil the end result, but I will say you'll earn yourself an achievement for your troubles (whilst also completing an Abstergo Challenge to boot).

The ability to slide up to a bar and virtually drink makes Black Flask... er, Black Flag, the perfect drinking game! Literally. Every time you pass by a tavern - drink! Every time you make Edward drink... go ahead and drink one too! The possibilities are truly endless.

Three Sheets to the Wind!

As the game's story unfolds you'll chill out with the likes of James Kidd (Captain Kidd) and Edward Teach (Blackbeard), who teach you how to sail... and that's where the glory of Black Flag really shines.

Half of the game is spent on the Jackdaw (your ship) sailing the high seas where you'll engage in fierce ship-to-ship battles, harpoon whales, take over sea forts, explore tiny archipelago islands, fight sharks, look for treasure at the bottom of the sea in a diving bell, swoop across decks Errol Flynn style to hijack ships... all the things that make a pirate a pirate!

(... Sounds like the plot of the next Hangover movie, right?)

The sailing system is basically ripped straight from Assassin’s Creed III, so if you want an authentic sailing sim... get a boat. Personally, I couldn't be happier with it. Once I earned my Captain's tricorne I spent more time at sea then I did on land. Which means I drank more because I made it my personal mission to pillage every ship I came upon... and take a shot of rum once it was scuttled!

There are multiplayer modes in Black Flag, but no one plays Assassin's Creed games for the multiplayer.

While they're good for a quick distraction, and certainly more fun than getting your ship bilged on her anchor, they're not nearly as fun as cracking Jenny's teacup.

Aaaaaaar! It's a pirate's life for me, matey!

Until next time... keep your gaming rig's poop deck swabbed and your tankard full of Nelson's folly! 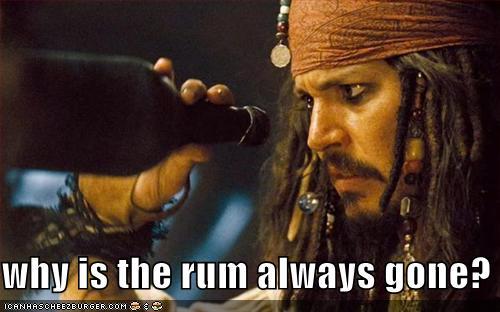 ** GameSkinny reminds you that you must be at least 21 years of age in the good ole U.S. of A to con­sume alco­hol. If you or someone you know has a problem with alcohol... get them help immediately. Seriously!  If you or someone you know has a problem using a keyboard and mouse, well... you can't fix evolution. We don't condone any of the following:  alcoholism, underage drinking, driving under the influence, binge drinking on cheap booze, lying under oath, or cheering for the Dodgers. WARNING: The consumption of alcohol may create the illusion that you are a smarter, faster and have a better K/D ration than all other gamers. GameSkinny encourages you to drink and frag responsibly!