Nintendo Direct unveils Linkle, the crossbow expert that will fight the good fight with four additional characters in Hyrule Warriors Legends in March next year.
by Gabriella Graham

Nintendo Direct's broadcast officially confirms the rumors: Link's female incarnation, Linkle, is coming to Hyrule Warriors Legends. She'll be joining four other newbies to the Hyrule Warriors scene, but as the only original character amongst them.

From rumors to reality

Over a year ago, fans discovered some exciting photos in a Hyrule Warriors art book. The book contained character designs, including one original character on a page titled "previously unseen rejected characters." This initial discovery of Linkle first uncovered her name, but not her exact relation to the game. 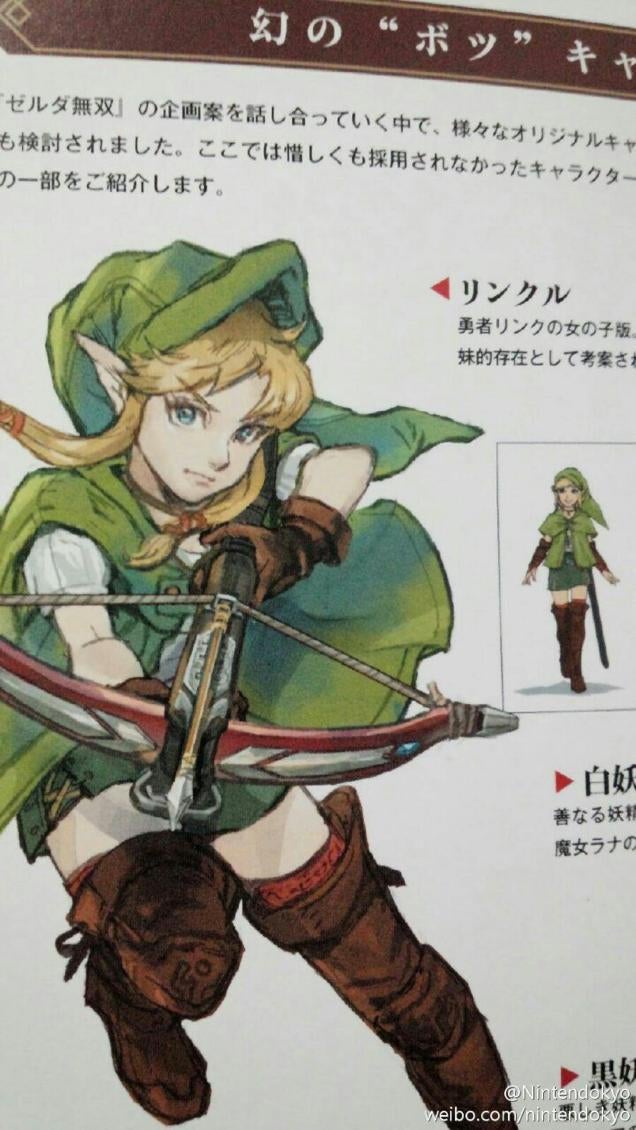 Fans theorized that Link had gained a younger sister based off the inclusion of the character å¦¹ (or imouto) in the art supplement. Fortunately, game developer Koei Tecmo never set out to change the game's lore. Can you imagine the fan rage? I shudder at the thought. No, it's much more likely Linkle was intended as "sister-like."

Linkle returned to front-page news when fans spotted a small hint earlier this month in a leaked Hyrule Warriors Legends trailer. The heroine's red and silver bow popped up in the final character screen right beside Tetra's face, and players jumped on the connection with squeals of delight and hopeful expectations.

And those players were spot-on

Nintendo Direct revealed Linkle amongst four other characters new to Hyrule Warriors for the 3DS installment. The game also introduces Legend of Zelda: Wind Waker characters Toon Link, Tetra, and The King of Hyrule. Skull Kid from Majora's Mask joins in with a touch a mischief and villainy.

Nintendo of America's Bill Trinnen describes Linkle's fighting style as energetic. She's a dual crossbow-wielding hunter from a small village filled with cuckoos. Given the finicky and troublesome nature of those birds, it's no wonder she'd need a healthy dose of her own energy to keep up. The reveal included a sneak peek of one of Linkle's signature attacks, a spinning kick reminiscent of Link's Spin Attack.

Check out Linkle in action in the video below.

How do you feel about these character additions? Are you pumped to see how Linkle stands up against hordes of enemies? Do you think Nintendo will ever release a male version of Zelda to match Linkle's gender-bending? Discuss!