Now that Orphan's Kickstarter has finished, creator Brandon Goins is ready to get down to business. I caught up to him to ask him about the future of Windy Hill Studio.
by Jessa Rittenhouse

In February, I interviewed Brandon Goins of Windy Hill Studio about his Kickstarter campaign to raise funds for Orphan, a 2D sidescroller about a young boy fighting for survival following an alien invasion.

Yesterday I caught up with Brandon to talk about his successful Kickstarter and the future of Orphan.

Jessa Rittenhouse:  First off, I want to congratulate you on your successful Kickstarter!

JR: When I first spoke with you, you were a little anxious because it seemed like your Kickstarter had plateaued, but then it really took off! That had to feel pretty amazing. Did you expect to exceed your goal like that?

BG:  No. Literally. When I set the PS4 stretch goal I didn't think it would be met; I just hoped that would bring in a little more interest so I might actually have a shot of reaching the base goal. When the goal was met, and then later the stretch goal, it was suprising and nervewrecking. I honestly didn't even set the stretch goal high enough to cover the entire cost of adding PS4 support because I didn't expect to meet it and I planned on raising that money separately. It was really awesome to see people pile on and support Orphan to the fullest extent.

The road to funding at an end, Brandon Goins is beginning the journey of completing Orphan's development.

JR:  Overall, what was your Kickstarter experience like? If you did it over again, is there something you would do differently?

BG:  It's something I hope to never do again! Even though it was ultimately successful, remember it didn't hit the goal until the next to last day. That was 34 days of excruciating tension for which 90% of the time it looked destined for failure. But in the end it paid off, more emotionally than financially. Yeah, the money was raised - but that will all be spent within a year's time. What I will remember is how my spirits were raised and how people I never met changed my life in a big way. If the Kickstarter had failed I could have accepted a publishing deal, got the money and got Orphan made just the same, but I would have never experienced that emotional rollercoaster that was both a miserable and uplifting experience. I'm glad it happened, but once in a lifetime is enough.

BG:  It was amazing in a lot of ways.

JR:  This is your first attempt at making a game. How long do you think it will take you to finish it? Do you have a specific timeline in mind?

BG:  I have a weekly milestone schedule set and as development continues I'm getting a good sense of how well I can keep up. The goal was to have the game out in the end of the first quarter 2016 and so far I think that's still reasonable. The first test is to deliver a playable demo of the game to my backers by July 1 and how late (or early) I meet that deadline will probably be telling.

BG:  I've not had a whole lot of specific feedback from the backers yet, but that's because we we're still early on and I've not engaged them with a lot of content, yet. Next week, I plan on sending out the first set of backer surveys regarding platforms and console support. When I get the first playable demo into their hands I'll be anxiously awaiting feedback and suggestions. I did get quite a bit of feedback from people in general - not only from backers - about the characters animations, and I have done a lot of tweaking on them. I expect there will be plenty of that in the year to come.

JR:  You must be looking forward to it, as much as it's got to be anxiety-inducing, too.

BG:  Oh yeah. Making a game has long been something I've wanted to do, but making a bad game has never crossed my mind. Now suddenly I'm nervous that I might do all this work and nobody really likes it. So now the stakes have changed, and I realize that whatever future I think I may have in game development could possibly hinge on the response to the first game I ever make. Yeah, that is anxiety-inducing.

JR:  I'm sure it'll be great. What you've shown us of Orphan so far looks absolutely beautiful.

With beautiful, photographic scenery and powerful, evocative sermons that eerily suit the experience of an alien invasion, it's hard to pinpoint a division between art and entertainment - if such a division exists in Orphan at all.

JR:  One question that seems to crop up pretty often and sparks some pretty heavy debate is "Are video games art?" Your use of photography in your game seems to be a very artistic choice, to me. Where is it that you stand on that particular question?

BG:  Absolutely video games are art, but I probably can't give a good, well-reasoned argument for why that is. The difference between art and entertainment is probably hard to describe - especially in a medium like video games that tries to capitalize on both. I can remember the very first time I ever played a video game on the Atari 2600, and I can't tell if you I had fun or not or [if I] was entertained or not, but I know I was captivated; I remember what that felt like, just like I can remember what it felt like the first time I played Duck Hunt and heard the theme music to Gyromite. I think something that can imprint a memory of a feeling, not just a memory of an experience, has probably got to be art. Even if that's not the definition of art it's the definition of something that I love very much.

JR:  Oddworld Inhabitants founder Lorne Lanning recently suggested that capitalism is destroying games, but that indie developers with more sustainable business models are a sign of hope for this popular entertainment medium. As an indie developer, yourself, what do you think are some of the advantages to taking the route you have? What are some of the disadvantages?

BG:  I don't think indies have any disadvantage at all. Yeah, most indies will never sell as many games as EA, but when you are a small studio, a small amount of money can go a long way. Just a few hundred thousand dollars in sales can keep an indie studio going, and as long as indie studios are going, then the future of games is solid. We do, however, need the big companies to keep the big console manufacturers and technology developers in business, so even though I'm not shelling out money to download easy fatalities for Mortal Kombat X, I'm glad someone is.

JR:  In light of the advantages of indie development, would you take a deal from a major publisher in the future if you made other games after Orphan, or would you stay small and go at it alone, again?

BG:  I'd love to think that from here on I could sustain myself as a game developer from game to game solely on sales. If that didn't work and I ended up with not enough money to make the next game, I'd certainly work with a publisher to get it done. But the freedom that comes with going it alone is all that most game developers want. However, it's entirely possible to work with a publisher strictly on marketing and distribution, and I'm still open to that even now - I would just never want to be trapped in a publishing deal during development. It's less about publishers and more about simply wanting to be your own boss. I just never want game development to feel like a job. 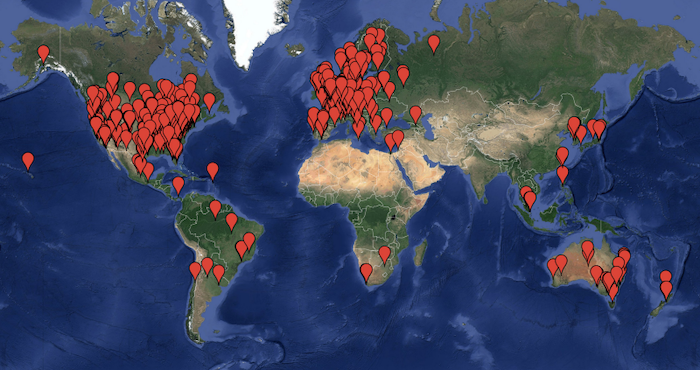 People around the globe were excited to support Orphan.

JR:  Your Kickstarter has backers from all over the world, with tons in Europe and North America, but at least a few on each continent. That has to be pretty gratifying! Did you expect such a global reaction?

BG: I certainly didn't. Being from the rural US, I dare to say I never even think on a global level. It was suprising and a lot of fun. I had never even thought about globalization before the Kickstarter, and so my eyes were opened.

JR:  Your Kickstarter is over, and now updates are viewable by backers only - but there's a PayPal button on the Kickstarter site. While it's likely too late for the Kickstarter rewards, can people still support the game and get a peek at your updates?

BG:  I was just thinking about that today, as I'm working on an update for next week. As I don't believe there's a way to open the updates for non-Kickstarter backers, I'm probably going to build an email list for the PayPal backers and keep them up to date that way. I've also considered setting up a private forum. If you're generous enough to support me in this venture, I certainly want to keep you in the loop.

JR:  One last question. What advice would you offer to someone new to game development who wants to go the indie route, themselves?

BG:  You just have to go for it. There's nothing more to it than doing it. It's not about education, it's not about who you know, it's not about money. You can get the software for free and you can learn everything you need to know from the internet. All you have to do is try. I was thinking today about how Jonathan Blow is a millionaire, yet I don't know anyone in person who has ever heard of Braid. That's not a knock on Braid, that just tells you how enormous the market is. If you can make a halfway decent game, it's hard to believe you can't make at least a modest living doing it and that's all any of us really want.

Brandon Goins is the founder of Windy Hill Studio and creator of the 2D sidescroller Orphan, currently in development. If you want to donate to the project, you may do so via the PayPal button on his Kickstarter page here.