The final and most bizarre entry in the Clock Tower series.
by katlaborde

This week marks my final look at the Clock Tower series as we close out with Clock Tower 3 for the PlayStation 2. As the first, and last, title on the PlayStation 2, Capcom takes over development from Human Entertainment, creating their own strange, yet interesting take on the horror franchise.

Released in 2003, Clock Tower 3 differs greatly from its predecessors in almost every aspect. As expected, the story does not continue from any of the other games. Actually, the game is directed by Kinji Fukasaku who directed the Japanese cult action film Battle Royale. In addition, the gameplay differs as well by offering direct control over the protagonist instead of the usual point-and-click controls.

Alyssa Hamilton, not the Alyssa from Clock Tower 2

Alyssa Hamilton, a fourteen year-old girl away at boarding school, receives a letter from her mother urging her to stay hidden until her fifteenth birthday. Naturally, Alyssa does not listen, opting instead to return to the family's boarding house in England to check on her mother. When she arrives at her home, Alyssa notices her mother is gone. As Alyssa searches her house, a tall, brooding man, identifying himself as a tenant in the boarding house, tells her that Alyssa's mother has gone away.

Alyssa continues searching the house finding a letter along with some holy water left by her mother. Her mother tells Alyssa that she anticipated her return and left the holy water for her as a means of protection. Then, in the midst of her confusion, music is heard followed by Alyssa being transported to London during World War II. Yep, this game's got time travel! 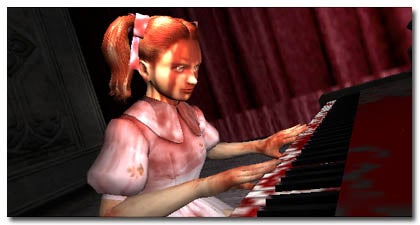 As Alyssa explores the bombarded city of London, she witnesses the gruesome murder of a young girl named May. The girl's assailant, a large man wielding a giant sledgehammer, pursues Alyssa through the rest of the level. The story and gameplay follow the same pattern: Alyssa gets transported to a random place, witnesses a murder, gets pursued, and eventually must fight the assailant through a boss battle.

When the boss battles are introduced, the game's story gets pretty mystical which is new for the franchise. Although it can get a bit cheesy, it was brave of the developers to incorporate Alyssa's mystical ancestry into a horror game. Additionally, the game's story is a lot more brutal than the other Clock Tower games. The deaths in the other games were often generic or even a bit humorous (the fat guy getting his head stuck in the clock, for example). However, this game has some pretty brutal moments. The death of May along with the death of a blind mother and son make for some pretty uncomfortable viewing.

Also, this game is really proud of its motion capture. The characters are all over the place in the cutscenes. Its kind of humorous to see actually...

Even though it comes off as silly nowadays, the use of motion capture was innovative for the time. The cutscenes are definitely well-directed, even if the writing suffers at moments. "I killed her..." Yeah, we just saw that, Sledgey. As mentioned earlier, this is the first game in the series to surrender complete control of the protagonist to the player. It is a breath of fresh air from the point-and-click gameplay of the others, especially with Clock Tower 2 allowing the gameplay to become stale. However, it is not without issues. Alyssa can get a bit ridiculous when she becomes 'panicked'. She stumbles around like a drunk to the point where it is almost unplayable. I get this spastic movement is punishment for allowing her to enter 'panic mode', but it almost always sends the player to the game over screen.

In addition, Clock Tower 3's gameplay might be seen as repetitive with each level following the same pattern. However, the gameplay does maintain a level of excitement by not allowing Alyssa to fight back until the inevitable boss battle. The only defense item Alyssa has against her pursuers is stunning them with holy water. Also, when Alyssa is being pursued, she can only hide or evade her attackers. There are some odd moments reminiscent of a Looney Tunes cartoon in which Alyssa will trap her pursuer by hitting them with a frying pan or slamming a door on their face. It's one of the reasons why you should play this game.

Clock Tower 3 is definitely an interesting and exciting horror game. The story does delve into silliness while still managing to hold your attention. The variety and zaniness of your pursuers is worth a look as well. Scissorman does somewhat make a return, but he looks...a bit different and has a sister!

The gameplay might be a bit repetitive for some gamers with the same sequence of actions needing to be performed to finish a level. Its predictable, but the wacky, yet entertaining story will drive most towards the game's completion. With that being said, Clock Tower 3 does lack the replayability of the other titles, only allowing for one obtainable ending. However, if you're up to it, you can go unlock costumes for Alyssa ala Resident Evil or Silent Hill 3. Although they are well...what you would expect.

And with that, I conclude my look at the Clock Tower franchise. However, I did enjoy looking at obscure horror games, so I will focus on another overlooked gem next week.

Meanwhile, let me know if you have any suggestions in the comments!