The Last of Us Tips For Survival

The Last of Us is a great game, here are some tips to help make it even better!
by Krystina Butler

We all know about The Last of Us; the PlayStation exclusive game won over 200 game of the year awards for 2013 all over the world.

For those of you not as familiar with the game itself, it is a post-apocalyptic zombie game taking place about twenty years into the future.  Players control Joel, a middle-aged, hardened man who vows to take care of teenager Ellie who has something very different about her. There are four different kinds of zombies that can be encountered throughout the game. However, they may not be the biggest threat to Joel and Ellie as other humans sometimes prove more dangerous.

The game can prove difficult at times.  It isn't like other zombie games where the player just rapid-fire kills any enemy he comes in contact with; The Last of Us is a stealth-based game.

Here are some tips to help combat the end of the world. I know, we all just want to finish the game.  No one really wants to take the time out to look around and open all the drawers and cabinets we may come across. But I would advise to do so in The Last of Us.  You can find tools and parts that will come in handy meleeing your weapons, which can save your life, as well as training manuals and supplements; and, most importantly, ammo-- which leads to the next tip

Don't get frustrated by the lack of ammo 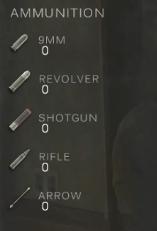 The Last of Us does not feature endless ammo and often it takes more than one bullet to take a harder enemy down. Firing endless shots at an enemy that could be taken down other ways, like strangulation or blunt force, just wastes the precious ammo that can be so hard to come across.  Object like bricks and bottles shouldn't be overlooked, either.  Although they don't do as much damage as the guns or bows, they can debilitate or distract any opponent you may come across.

Prison riots aside, shivs are fun.  In The Last of Us they are extremely useful for killing clickers and opening doors, but I don't suggest that you use them for anything else.  Other enemies can be defeated in different ways and when it comes down to it, you're going to regret using your shiv on that one random dude that you could have just sneak-strangled.

As I've said, there are multiple different enemies that you can encounter throughout The Last of Us and they all have their weaknesses.

Flight is better than fight

I know, I know, it's a combat game so we should be constantly engaging in some sort of violence.  But, The Last of Us is also a survival game and sometimes the actions that will lead to survival are knowing when to fight your battles and when to sneak on by or flat out run away.  If you're walking into a room full of sleeping clickers, it isn't necessary to go and kill all of them.  If you're sneaking and going unnoticed, you can easily move around them and scavenge for loot.

You will also often encounter multiple enemies not just one-- do not take this as a challenge.  Stealth kill if necessary, taking advantage of your bow (remember to retrieve those arrows after!). If an opponent becomes aware of you (especially humans) it's possible to grab and drag them away to a less conspicuous area where they can be dispatched.

All in all, play it smart, listen and be aware of your surroundings, know what you're up against, but most importantly have fun!