Crystal Chronicles will forever be one of my favorite games ever.
by J Nicole Miller

Final Fantasy Crystal Chronicles has been one of my favorite games for years. As a child, I suffered from Protective Parent Syndrome, so I had a very limited selection of games that I was allowed to play. This included the entire Final Fantasy series. However, I also had an older brother who managed to (somehow) convince our parents that we should be allowed to play Crystal Chronicles. They eventually caved, and I’ve loved the game ever since.

My brother and I fell into an incredibly intriguing world of miasma, myrrh, and crystal caravans. I learned how to tank, though we didn’t know to call it that all those years ago. So I was simply designated The One-Who-Runs-in-and-Hits-Stuff. Inevitably, I would die a lot (come on, I was maybe ten, and I sucked at video games). Phoenix Downs were like air to me, essential for my survival. Crystal Chronicles was also the game that helped my brother to discover that he enjoyed playing casters.

The ability to combine various spells in order to create stronger versions or even new spells entirely was something that always struck me as incredible. It makes the game more fun, as you experiment with timing and different combinations. I also liked the cutscenes that would occur as you traveled through the worlds. They were amusing and added character to the game. 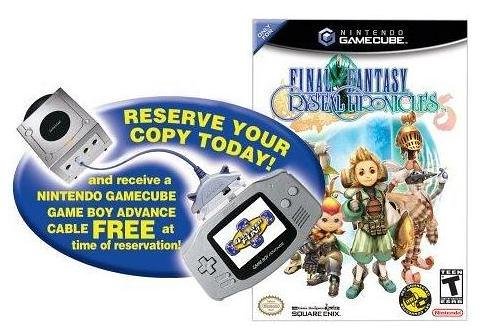 My one real complaint is that the game requires the use of either a Game Boy Advance or a Game Boy SP in order to play multiplayer. Yeah, every single player must have their own. It works really well, and I like that you can access menus on your own, personal screen. However, finding people (especially now, at college) who actually own GBAs or SPs, let alone people who know where they are, is incredibly difficult. And single-player just isn’t anywhere near as much fun. Because of this, I have to give the game a 9/10.

Crystal Chronicles is beautiful, and it has a compelling story and interesting levels. Every time you play, the experience is a little different, and I love it. Even ten years after its original release, I still absolutely adore this game, and it’s managed to keep its spot on my list of favorite games.

Our Rating
9
Crystal Chronicles will forever be one of my favorite games ever.