The Sims 4: So Bad It Even Makes Demon Babies Cry

If you haven't been following the absolute debacle that is Electronic Arts' latest installment in the Sims franchise, you've likely missed the walrus that is The Sims 4 stumbling out onto the stage that is gaming and dancing the worst ballet ever before diving off the stage and into a repulsed audience's lap.

In short: this game has been terrible nearly since the day it was announced. But why?

Electronic Arts Is Still Trying to Get into Your Pants...Where You Keep Your Wallet

Back in July things were already off to a bad start with (business as usual for EA) when they announced a "Premium" edition of the then upcoming now released Sims 4. Among other things, this enhanced edition promised...pretty much nothing. Oh, wait, it's not that the premium edition gives you more, it's that the standard edition will have less. 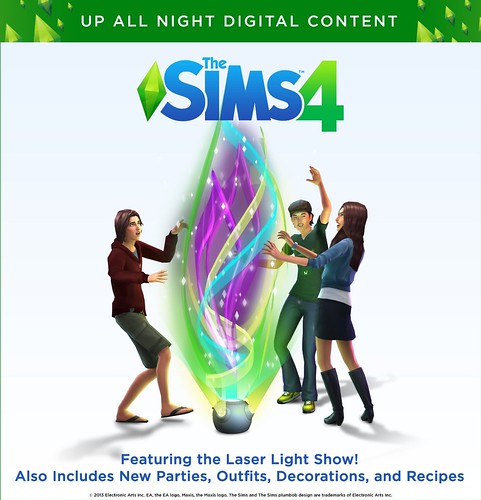 Up All Night Digital Content because you'll need something to do while you're up all night crying over your wasted $80.

Yes, that's right. Fans for over 15 years willing to pay $20 extra would be treated to a truly unique, new Sims experience with better graphics and more features so amazing...it would be almost like playing a brand new Sims game.

But wait, those same fans of over 15 years who can't quite afford to bump up to the "premium" experience have nothing to worry about. For just the low, low price of $60 - exactly the same cost of a brand new triple-A game - they can enjoy the experience of a reboot of The Sims 2 missing most of the features that made The Sims 3 good as well as a diminished graphical experience and none of the "premium" features.

I I see what you did there, Electronic Arts. "Limited" Edition. Witty. I'm seeing a pattern with this packaging art...

Seem a little...limited? Yeah EA thought so, too, so they made a funny.

A Bad Live Stage Demo =/= A Good Game to Come

Dear EA, I know you don't really care about the people who play your games at all, but could you at least try? At least a little? Please?

At Gamescom this year, The Sims 4 revealed its first live demo on stage in front of hundreds of industry big shots, gamers, and developer colleagues. Naturally, when the pressure's that high to perform well, you'd expect a game to put its absolute best foot forward. Well... you'd be surprised:

So, between the utter ridiculousness of the game's premise - which, let's be honest is actually standard in Sims games - and the fact that most feel the game is at best "just another Sims game" after seeing this demo EA really did show them what-for at Gamescom.

Ah, but one bad demo isn't the end of the world, of course. There's always a chance for redemption with a witty, fun, interesting trailer, right?

Well, if that doesn't work EA could always just be honest and forthright with prospective customers before just letting them go blind into buying this mess of a game, right? Surely EA wouldn't embargo the game for review outlets until after launch... Again, you'd be surprised.

Looks like there'll be no The Sims 4 reviews until after it's out. EA tells me no one's getting access ahead of release. I'm  nervous.

(Editor's Note: Confirmed. GameSkinny also reached out to EA for review codes of The Sims 4 and was given similar response.)

There are Games That *Seem* to Ignore Fans, Then There's This Game - Which Actually Does

As a developer, when the people you're supposed to be making a game for compile a large list of features missing from your upcoming game that they not only want to see but that were in the previous game in the franchise, would you maybe think about incorporating some of those features in the new game before launch?

Not if you're EA, you wouldn't.

Nevermind that your abomination-to-be has already been compared poorly to its predecessor, that your fans are leaving in droves due to your refusal to put desired features in a game you wouldn't even allow reviews of prior to it releasing, or that only a day after release the customers you've cheated have such nice things to say about your game as:

What the hell? I bought this being really excited about getting the next generation of Sims games, but it really just seems like a fancied up version of the Sims 2 with LESS features – Doctective. [0/10]

I can not believe how did they possibly manage to destroy an amazing franchise with this God awful game. Nothing, absolute NOTHING is good about this game. – BloodChronism [0/10]

Currently, the aggregated scores on Metacrtic leave the game at a dismal 4.2 out of 10.

It's just business as usual for EA, but there's at least one good thing about The Sims 4: the glitches are hilarious!

Why must you make the demon babies cry, EA? Why?

So let us know what you think. Were you as disappointed in The Sims 4 as I have been or can you redeem EA's latest failure and appease the demon babies?

Comment below and stick around on GameSkinny for when a challenger steps up to defend this trash in the near future.

In the meantime, enjoy some more demon babies!