America Votes with Cards Against Humanity

Exercise your civic duty with Cards Against Humanity's newest expansion packs.
by SRCRUZ

This year's presidential election is well on its way to becoming one of the most notable and controversial in American history.

All conventions have been thrown out the window— a "fringe" candidate and political outsider almost beat a Clinton. A Reality TV star, outspoken chauvinist and xenophobe captured the nomination from a Bush. A billionaire got billions of dollars in free advertising from networks and websites. A Clinton may inhabit the oval office yet again.

You can't go out and vote for our next president until November 8, but you can get a leg-up on the fun with Cards Against Humanity's newest hijink card pack and vote with your dollar for your favorite candidate.

Each of the limited-edition expansion packs features 15 cards unique to each presidential candidate.

At the end of the promotion, Cards Against Humanity will tally up the sales from each of the card packs and "depending on which pack gets more support, we will donate all the money in support of Hillary Clinton’s campaign."

What if you're a Gary Johnson or Jill Stein supporter?

According to Cards Against Humanity:

"Just skip the middleman and vote for Trump."

Will you be buying one of these packs? Which one? Let us know in the comments! And check out the links below if you'd like to purchase either of these sets through Amazon. 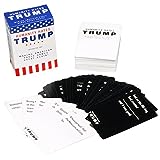 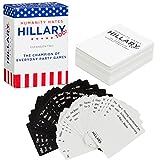