While it has it's flaws, Pac-Man World is still a champion in it's craft. Wakka wakka wakka!
by DannyPTP

I'm pretty sure everyone who's a gamer has at least heard of Pac-Man in some regard. From his arcade days in the 1980s to the many games released on various consoles over the years, there's been at least one Pac-Man game released on almost every console out there.

To coincide with Pac-Man's 20th anniversary, Namco released Pac-Man World in 1999, the yellow gobbler's first 3D adventure and first game for the PlayStation, which kept the original flair of the arcade classic while adding new features. So how does it play?

It's Pac-Man's birthday and everyone is looking forward to celebrating! From Ms. Pac-Man to Professor Pac and even Pooka, (Dig Dug), they can't wait to see Pac-Man and wish him many happy returns.

But someone doesn't want to celebrate and instead causes chaos by kidnapping Pac-Man's friends. That someone is Toc-Man, a robot impersonator who wants to steal Pac-Man's identity. So, it's up to Pac-Man to travel to Ghost Island, rescue his friends, and stop Toc-Man. 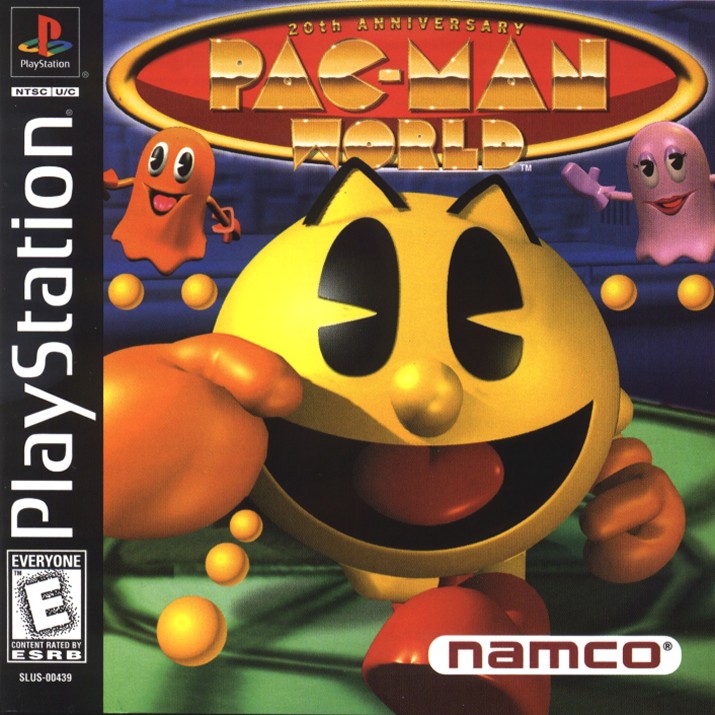 From the main menu, you have a few options:

Pac-Man World plays similar to your average 3D platformer, offering an open world display on (or through) which Pac-Man can free roam. Along the way, you'll encounter maze structures littered with pellets, including power pellets, which make ghosts vulnerable and easier to eat.

Fruit also makes a return, but instead of just being a collectible item for additional points, fruit is used to unlock doors that allow you to find bonus items, extra mazes or other pathways necessary to progress through the level. Additionally, to help combat ghosts and various other enemies, Pac-Man has a variety of moves at his disposal, including the butt bounce, which can be used to destroy most enemies from above and activate switches. You can also shoot power pellets, which can be charged to deliver explosive results. And you have the rev roll, a move reminiscent of Sonic The Hedgehog's spindash, that can be used to activate fan platforms, allowing Pac-Man to reach higher areas and cross gigantic chasms.

Ghost Island serves as the main hub in Pac-Man World, with each section of the island having a various sub-levels, such as pirate beaches, clown fun houses, and even space itself. Somewhere in each of these levels hides a key that can be collected to free a friend. And every last level of a section pits you against a boss, each with a unique way of being defeated.

Occasionally, the level design can be a little confusing, making you miss a few items and having you backtrack in order to proceed through the level. This type of thing can certainly be annoying, but isn't game-breaking.

Pac-Man World has some excellent sound and music, from the iconic effects of the original Pac-Man to the even more cartoony sounds associated with the franchise.

Musically, each piece works well with the aesthetics of each level, from the swashbuckling tunes heard in "Crazy Cannonade" to the feeling that you've stepped into a circus tent and are ready to have fun in "Clowning Around." Each track is catchy in its own right and you will find some repeating in your head.

Graphically, the game is stellar, showing bright and colorful imagery all around, especially in the funhouse levels. The graphics give each level an identity, easily allowing the player to recognize what the area is based on, as soon as they set foot inside. The transition to 3D works well here, if you're a fan of the classics, you'll easily recognise each character as you play through the game.

While not as graphically impressive as, say, Crash Bandicoot 2: Cortex Strikes Back, the game still boasts vibrancy, allowing players to marvel at the details.

While not the best game on the PlayStation, Pac-Man World is still a worthy addition to your collection. Yes, the game has a few nit picky moments here and there, but no game is perfect. Pac-Man World, despite its flaws, still has a lot of fun and charm and will delight players with its references and familiarity -- even today.

Our Rating
8
While it has it's flaws, Pac-Man World is still a champion in it's craft. Wakka wakka wakka!
Reviewed On: Original PlayStation
What Our Ratings Mean