Is Crowfall the MMO We've Been Waiting For?

Will the new Crowfall MMO break the World of Warcraft mold that managed to take over the very definition of an MMO?
by Autumn Fish

Crowfall is a new MMO that was unleashed on Kickstarter yesterday, promising features that have never been heard of in an MMO before, let alone seen put to the test.

Its unveiling brought a wildfire of fans to Crowfall's gates, agonizingly awaiting its anticipated release in Winter of 2016. It claims to be changing the MMO genre as we know it: a bold claim for any man since the release of World of Warcraft. The question is, will Crowfall succeed in changing up the MMO game?

Is Crowfall the MMO We Desperately Need?

To answer that question, we first need an understanding of MMOs, what defines them, and what the history of MMOs looks like. If you are anything like a young Autumn at the age of 12, the only thing you know about MMOs is what it stands for: Massively Multiplayer Online Game. So what makes an MMO?

What is an MMO these days?

Other than the fact that you're playing an online game with loads of other people, MMOs are exceedingly difficult to categorize. One might assume that League of Legends is an MMO, but it isn't—it's a MOBA (Multiplayer Online Battle Arena). However, there is one word that stands out when you compare the two genre's: 'Massively'. What is it about a game that gives it that extra letter 'M'? 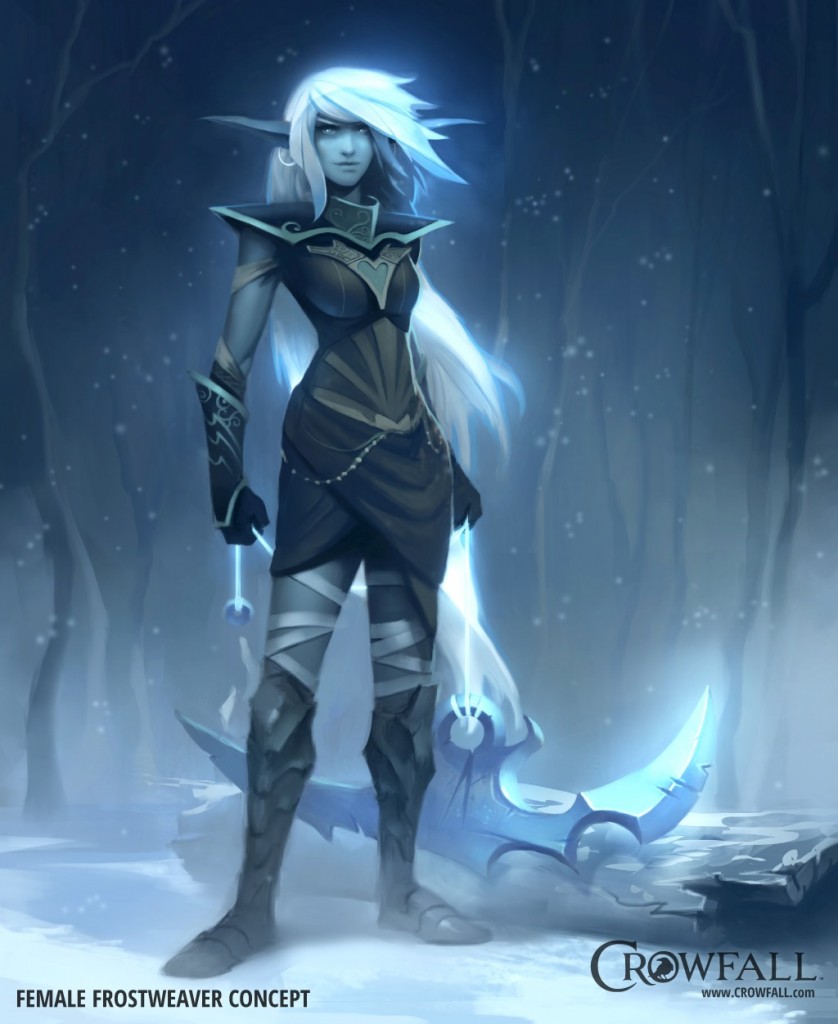 The term MMO was originally coined to reference one of the first online graphical-based games, Everquest. Everquest is what we call an MMORPG, and a pretty hardcore one at that. Obvious RPG elements aside, what made this game different from League of Legends is the massive, seamless world. Although the word 'Massively' came around in part because of the size of its player-base, it had a lot to do with the size of the world and the sense of virtual space.

Think about it. In League of Legends, you're often stuck in the middle of a lobby, waiting for a game to start. Everquest doesn't have any lobbies—all of its spaces are virtual. Everything you needed was provided to you within the virtual space, not in some lobby before the start of the game.

For the sake of this article, an MMO is defined as a game that offers a multiplayer experience through the exclusive use of company-owned servers (unlike Minecraft) with a complete virtual space in which players can interact. Crowfall fits that bill rather nicely, so let's move on.

The History of the MMO

Back in the late 90s and early 2000s, the MMO was still a budding concept. People weren't expecting to make excessive amounts of money off of this weird new style of playing games, so they stuck to making games that they wanted to see. The MMO market was beginning to fill up with a small variety of games, and it was rare to see somebody trying to clone an idea when they could just as easily come up with their own. There were no preconceived notions about what an MMO should be. 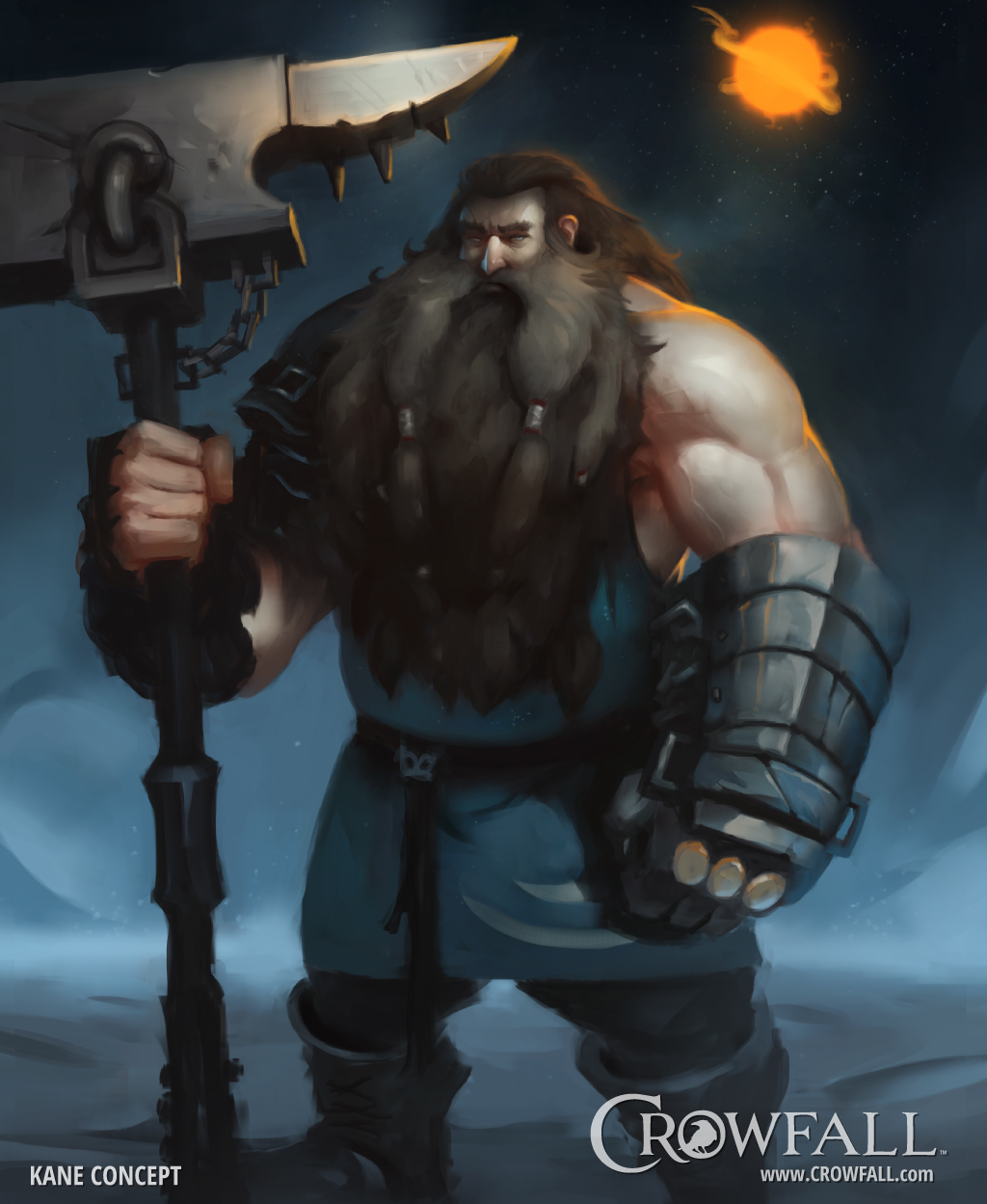 Fast forward to November of 2004, World of Warcraft has just been released, and all the little gamers get sucked into it like a vacuum. Blizzard is suddenly making billions of dollars in the MMO market where other companies have only scored in the tens of millions.

At this point, most companies even considering the MMO market have massive WoW Envy. MMOs began to pop up left and right, promising the pivotal MMO experience, hoping to tap into a niche somewhere. A lot of finished products turn out to be a World of Warcraft reskin with a somewhat entertaining idea that WoW didn't incorporate and isn't really worth all the trouble in the first place.

It would be ignorant to claim that every single MMO coming out anymore is just another World of Warcraft, because that's not strictly true. There are some games coming out that break away from the mold but inadvertently end up using WoW ideas anyway without anybody realizing it.

In more recent years, MMOs have seen the adoption of live-action combat with the increase in general internet speed. Despite MMOs receiving an overhauled combat system, they are still having difficulties breaking away from that mold. TERA, of any note, is like World of Warcraft but with a completely new combat system.

At this point, MMOs are starting to feel stale to people who've stuck with the genre for so long. As time goes on, I find myself slowly gravitating away from MMOs out of exhaustion. I was so excited for the Elder Scrolls Online, I thought it was going to change the MMO scene only to be proven wrong by a terrible WoW clone with an Elder Scrolls skin. It's really hard to trust MMO developers these days. 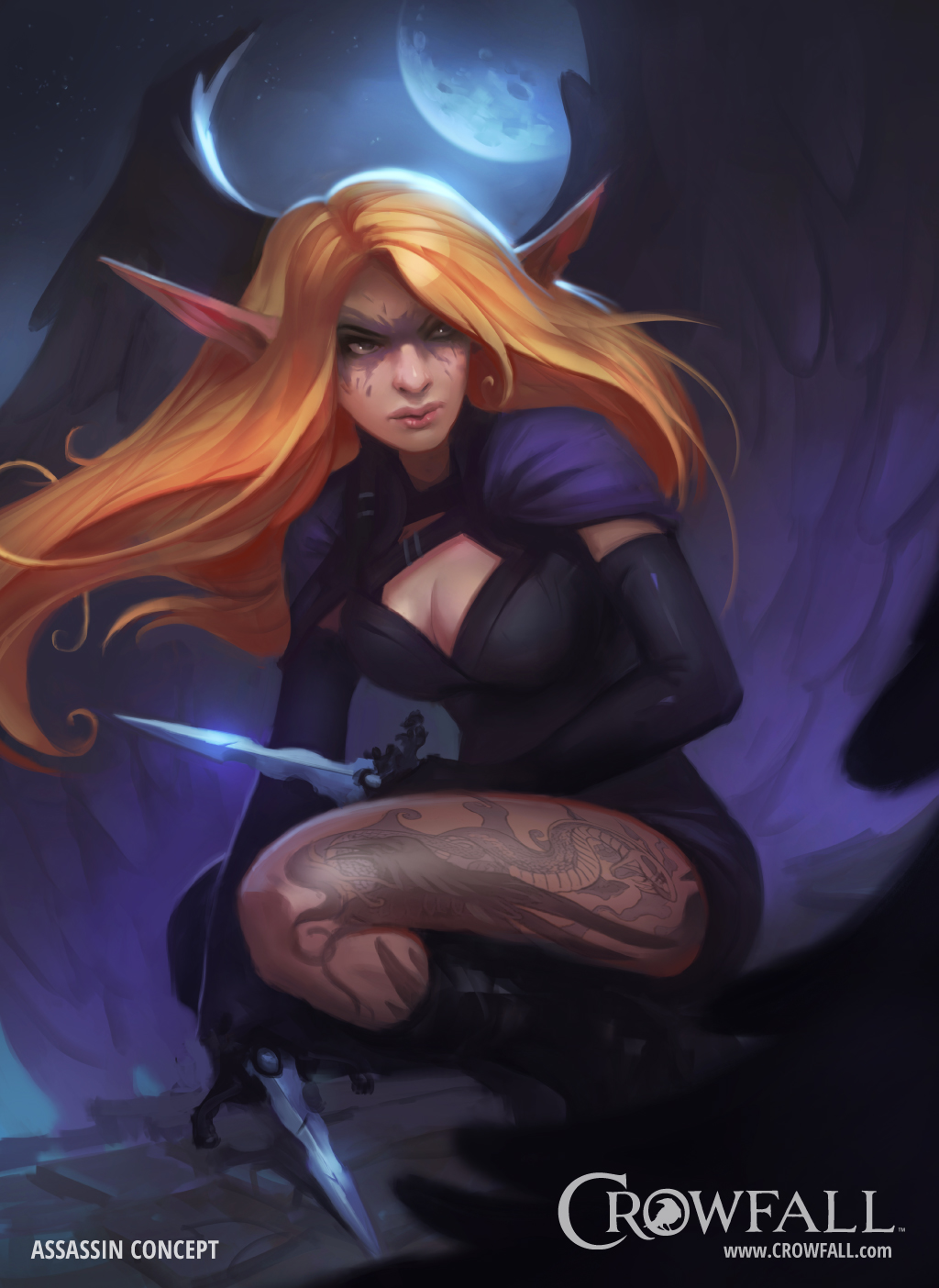 One major thing that Crowfall has going for them is that they are Kickstarting their project. Kickstarter, while it can be easily abused, will effectively keep them away from the publishers who want the game to be more like World of Warcraft. Since the people who want it to become a WoW clone are effectively out of the picture, ArtCraft Entertainment can work on making the game they want to create.

One notable aspect of a WoW clone is the perceivable end game: the raids, the dungeons, the gear crafting. Once you reach max level, the game changes completely—and some people would rather keep progressing. At the moment, there is no sign that characters in Crowfall even have traditional levels. We know that you can train your skills by using them, but that's about it.

Another thing that makes Crowfall stand out is the player-made worlds. By the time Crowfall's core module is released, there will not be a single map that is handcrafted by developers. Eternal Kingdoms, the only permanent land in the game, are completely player owned and shaped. The Dying Worlds of the Campaign are procedurally generated and will reshape themselves over time.

Crowfall boasts the complete and utter lack of instances: a mechanic used to get players and their party into a space made just for them. Some people argue that the Eternal Kingdoms and Dying Worlds are essentially instances, but I beg to differ. Instances are areas where tens of millions of people could be all at once, and you would never know.

Instances are the reason the dungeons you enter are empty and seemingly untouched by any other player. Neither the Dying Worlds nor the Eternal Kingdoms count as an instance. They are both locations that you can go to meet up with other players, whether they are in the same party or not.

Admittedly, the faction system used to separate players into three distinct moral roles harkens the World of Warcraft bells, but factions appear to have more depth than simply "you are all enemies, now kill each other." Not only that, but under the three factions there are twelve unique deities to side with, which may or may not flesh out faction-life even further. 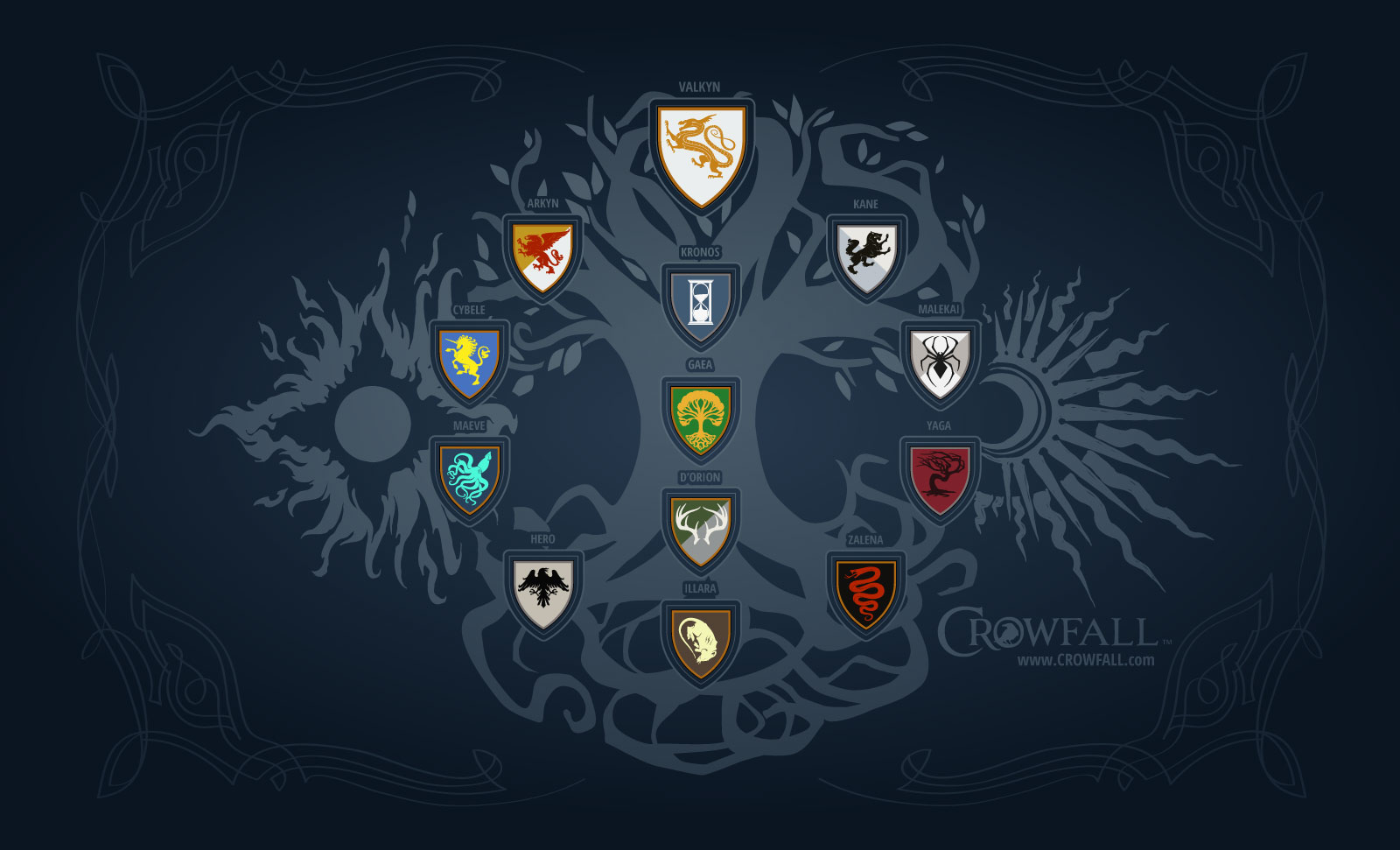 Crowfall isn't scripted. While NPCs will probably find their way into the game, it's unlikely they will make it as quest givers. I imagine if any NPC tried to tell a Crow what to do, they would get a sword through their face. This is a War of the Gods, and their champions don't have time for slaying and collection quests.

Crowfall likely won't have any NPC-generated quests. If any quests even make it into the game, I don't think they'll ever depart from the Eternal Kingdoms.

Crowfall - The MMO We've Been Waiting For 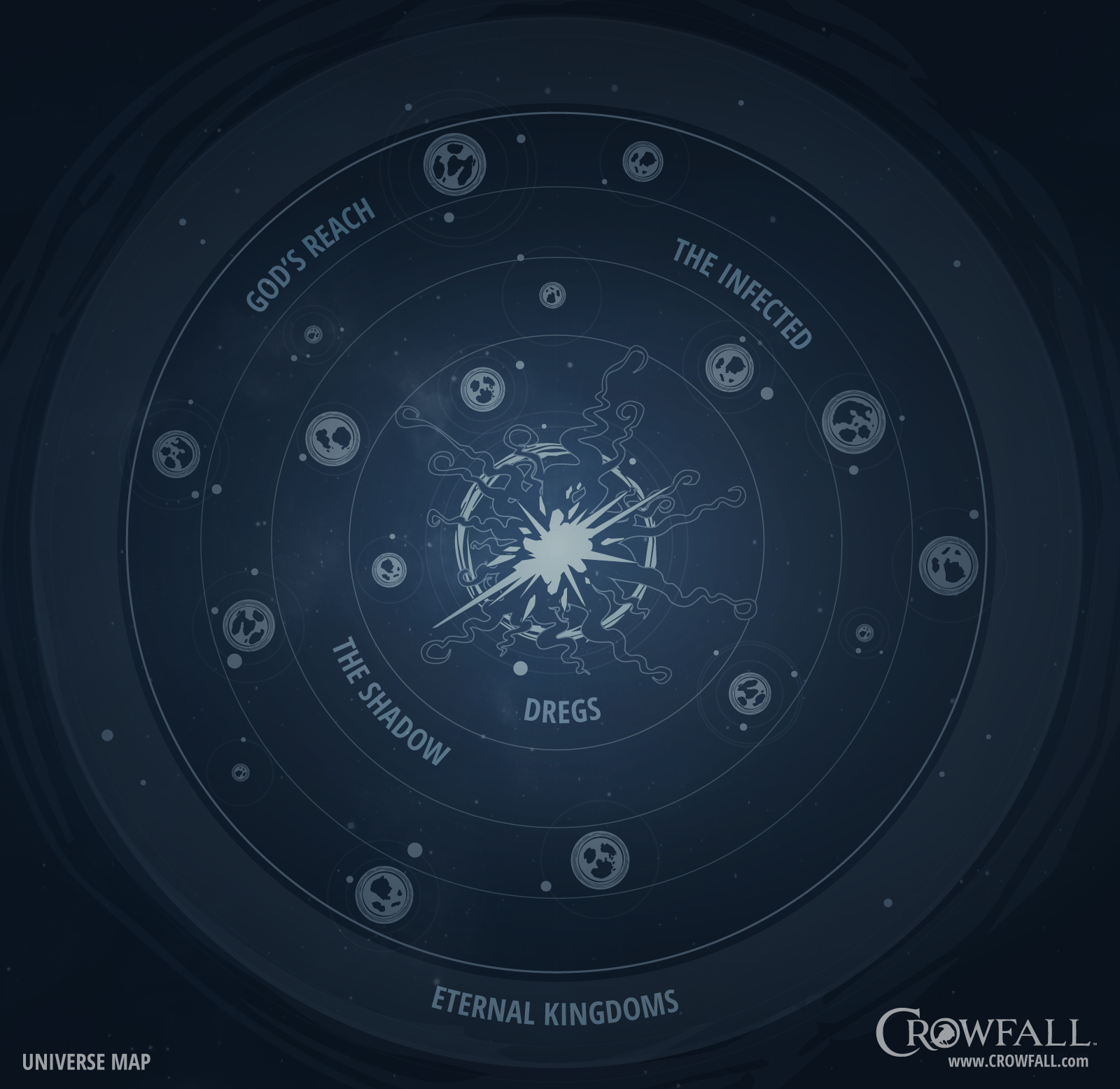 Even if Crowfall isn't really your cup of tea, the simple fact that it exists will inspire developers to take risks with MMOs again. In the next few years, we are going to start seeing games pop up that makes us rethink how we define the MMO genre. Crowfall will bring about an insurgence of fresh ideas that may not have been possible until recently.

Crowfall is breaking the WoW mold and proved to us yesterday that these new ideas actually hold a strong place in the world. The hard part is over: Crowfall has been unveiled and the MMO community is accepting it with open arms. It won't be long before we start seeing fresh MMO ideas popping up out of the blue, to fill in the niches that have yet to be tapped into.