Metroid Prime pinball might be an old game, but it's still pretty damn fun.
by David Fisher

It is now Day 8 of my Metroid Rewind Review series, and today we have something entirely different - but totally expected - for the Metroid series: pinball. That's right, everyone who has ever played Metroid and thought "wouldn't it be funny if Samus wound up on a pinball table?" are finally getting their wish with Metroid Prime: Pinball on the Nintendo DS. While I am certain hilarity would ensue if I tried to review this game as a Metroid title, I will instead rate it as a pinball game (sorry fans).

As with all Rewind Reviews, Metroid Prime: Pinball will undergo a review process through the eyes of a modern critic. No nostalgia glasses, no excuses, no rationalizing hardware limitations, and no sparing myself from the angry fans and readers (is anyone going to complain about this review if I gave it a 0/10?). Nothing will excuse this game from anything that we - as modern gamers - would expect to see from the genre today. With that said... okay, I can't keep this up. Let's just get Metroid Prime: Pinball over with...

That's right folks, Metroid Prime: Pinball has a plot. After exploring the deepest parts of space, Samus is forcibly contained within her Morph Ball by the evil forces of the Pinball Empire. Armed with nothing more than her morph ball bombs, Samus must defeat the Emperor Silveron to return to her normal form.

Okay, so that's not the real plot. Essentially Metroid Prime: Pinball is loosely based upon the events of Metroid Prime. Each table is themed after a certain area in the game, and the player must collect the Chozo Artifacts in order to enter the Impact Crater and kill Metroid Prime. While it is by no means an engaging plot, I thought it worth mentioning.

Metroid Prime: Pinball takes advantage of everything that a pinball video game can do that a physical table cannot. The morph ball allows Samus to leave bombs around, and as such enemies can spawn during special events and bonus rounds which adds to the game without making it feel too much like it's not pinball. Everything that is pinball-esque is also present with features ranging from bumpers, to gates, and even a flippy-thing that I never knew what to call it (but I love because it gets me lots of points). The game blends many Metroid themes as well. Bonus modes such as "Burrower Bash" and "Shriekbat Shootout" feel like the enemy rushes from Metroid Prime. They even added "Hurry Up" bonuses that resemble escape scenes from various Metroid titles.The transformation into Samus-mode also creates interesting challenges that I've never experienced from a pinball game before. Shooting at hordes of enemies while nailed down to one place makes for a fun experience, and the addition of health (yes, Samus can die in a pinball game) gives the game a challenge that you otherwise would never expect.

The variety in the tables also helps the game from becoming mundane, and the multi-mission mode allows players to swap tables at any time whenever the "travel" panel appears.

It's a pinball game. Seriously, if you don't like pinball you'll probably play the game once, never to touch it again. 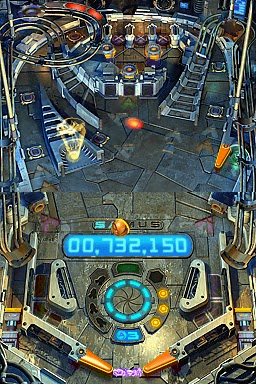 While the game looks fine for a pinball game, it can't hold a candle to the actual Metroid Prime. The tables are masterfully drawn, looking much like an area from the actual Prime series. Samus's model (and other creatures) on the other hand look terrible as they are rendered with a weak 3D engine that looks blurry at best.

The music fits into the game really well. Unfortunately, the only pinball table that I can stand to keep playing over and over again is the Space Pirate Frigate stage. I love the Brinstar guitar remix on this stage, and if I could I would listen to it until I feel like smashing my DS on the wall.

Metroid Prime: Pinball is a pinball game. It's a good pinball game, but it's a pinball game nonetheless. While I would give the game an 8/10 on a personal note, I have to give it a 7/10 on the grounds that the game is forgettable, even as far as pinball games go.

I recommend this game for players who desperately want to play all the Metroid they can get their hands on, or pinball enthusiasts who want something that normal pinball tables - and most pinball video games - cannot offer.

Be sure to check back on this article, or the GameSkinny front page for future reviews as we make our way from the original 1986 Metroid on the NES to the 2010 release of Metroid: Other M. See you next mission!

Reviews in this Series:

Our Rating
7
Metroid Prime pinball might be an old game, but it's still pretty damn fun.
Reviewed On: DS
What Our Ratings Mean