This game looks like a mad house; what's with Monster Hunter 4 Ultimate?
by Autumn Fish

Have you ever wondered what the big deal was about a certain upcoming game? Games have a tendency to get really hyped up, especially right before their expected release date. But what's the reason behind all of this unconfined hype? That's where we come in. On "What's with...?" we dive head first into the hype to discover what has people so excited about these games so you don't have to.

Today on "What's with...?" we are taking a look at Monster Hunter 4 Ultimate, slotted for a February 13th release on the 3DS family of systems. Thankfully, this definitely isn't the first game in the series so we can get a pretty good idea how it will turn out. In fact, it's not even the first Monster Hunter game on the 3DS, with Monster Hunter 3 Ultimate currently dominating the hotspot--along with its less-beloved Wii U port. 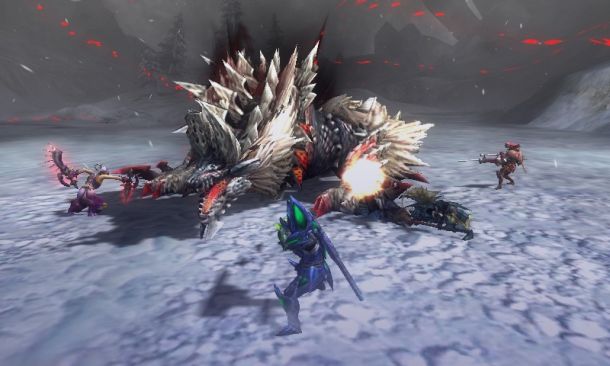 I popped a copy of Monster Hunter 3 Ultimate into my Wii U to see what it was all about. I created my first Hunter and experimented with the 12 different weapons in the game. At first, it seems like just another game. You're completing small quests to get the village set up so it can provide for your hunting needs. It takes awhile, but eventually you encounter your first real monster. The first time you encounter an actual monster, you begin to discover the vision of Monster Hunter... yet you're still far from the gigantic monstrosities that make themselves subtly known throughout the game in the form of earthquakes and the like.

These monsters all have dynamic attack patterns that vary depending on how the battle is going. They can become weak or exhausted and will lie down for a nap or nibble on food. Monsters also become enraged, where they go full-out offensive and pull some crazy, desperate attacks. If you strike them enough times in the right area, you can break pieces off their body for extra materials. Hunting monsters is definitely the focus of this game, they don't even try to hide it. Well for one, there's more variety of monsters. There are a total of 96 monster species in Monster Hunter 4 Ultimate, with 73 of those being true monstrosities. In comparison, Monster Hunter 3 Ultimate has 51 large monsters, just one less than the release of Monster Hunter 4 in Japan.

There are 14 weapons in the game, as opposed to Monster Hunter 3 Ultimate's 12. These include 11 Blademaster and 3 Gunner weapons: Great Sword, Long Sword, Sword and Shield, Dual Blades, Hammer, Hunting Horn, Lance, Gunlance, Switch Axe, Charge Blade, Insect Glaive, Light Bowgun, Heavy Bowgun, and Bow. There are no true "classes" in Monster Hunter. Instead there are two types of weapon classes that will determine what kind of armor you can were: Blademaster or Gunner. Other than that, you can switch to any weapon at pretty much any time--so long as you aren't in the middle of a mission.

While the number of 'questing' areas you find in the game is no different between the 3rd and 4th generations, Monster Hunter 4 Ultimate has its own variety of new areas with more rugged terrain due to a fleshed out climbing mechanic that lets you take to the high ground whenever a fight isn't going quite the way you want. This feature alone is bound to make the monster battles feel more dynamic and tense than ever before.

Overall, Monster Hunter 4 Ultimate is an action game with subtle RPG elements that pits you up against epic monsters in tense and dynamic battles that aims to pull in new fans from the west. It launches alongside the New 3DS on February 13th in North America and Europe.

So now that you know what's with Monster Hunter 4 Ultimate, are you hyped? I'd like to get as far as I can in Monster Hunter 3 Ultimate, first, but this is definitely a game I will be looking forward to.