The Science Behind it: How Voice Actors Sound Different From Game to Game

Your voice is one of the most personal things you can have, but how can actors have so many? Let's find out.
by Caio Sampaio

We all have our favorites characters in the video game industry -- the ones we learned to admire and cherish dearly in our minds. Characters like Solid Snake, Commander Shepard, Samus Aran, and Master Chief are some of the memorable protagonists the medium has produced. But bringing those characters to life is no easy task.

Animators, writers, modelers, and many other artists dedicate their time and skill to creating the people inside the fictional universe of a video game. But there's another professional who is crucial in dictating whether the audience will resonate with a character -- the voice actor.

Late last year, we published an article addressing the current state of voice acting in video games. In it, we discussed the issue of game developers relying on Troy Baker and Nolan North for the majority of the male protagonist roles in the industry.

As these two actors continue to be used for several projects, they face the challenge of altering their voices in order to prevent two characters from sounding the same.

Voice acting requires years of practice to master the science behind the art. In the topics below, we will explore some of the techniques voice actors use to constantly change their voices and bring a large cast of characters to life.

This is a technique mostly associated with singing, but actors use it in their work -- as the voice actor Brian Hull comments in the video above, in which he teaches how to sound as Mickey Mouse:

"All voices are kind of like music. Every voice has a melody. It is important to realize what those notes are and how they work."

The intention of the falsetto is to increase the pitch of the voice. In singing, this is the technique often employed when male singers use female-like voices. But in acting, it can serve various purposes.

For instance, an actor with a naturally deep voice who is playing a character that is young may be asked to perform a falsetto, in order to add some pitch to his voice and sound more juvenile.

It is important to note, however, that doing a falsetto does not imply making an entirely female voice. An experienced actor will know how to use this technique to reach a vast range of tones, as opposed to going to the extreme.

A question still lingers; however. How does the falsetto actually work?

The Wikipedia article about this technique reads:

"Production of the normal voice involves vibration of the entire vocal cord, with the glottis opening first at the bottom and then at the top. Production of falsetto, on the other hand, vibrates only the ligamentous edges of the vocal folds while leaving each fold's body relatively relaxed. Transition from modal voice to falsetto occurs when each vocal cord's main body, or vocalis muscle, relaxes, enabling the cricothyroid muscles to stretch the vocal ligaments"

"With the vocalis muscles relaxed it is possible for the cricothyroids to place great longitudinal tension upon the vocal ligaments. The tension can be increased in order to raise the pitch even after the maximum length of the cords has been reached. This makes the vocal folds thin so that there is negligible vertical phase difference. The vocalis muscles fall to the sides of the larynx and the vibration take place almost entirely in the ligaments."

So the falsetto allows actors to add pitch to their voices. But there is another technique that lets them take their voices in the opposite direction. 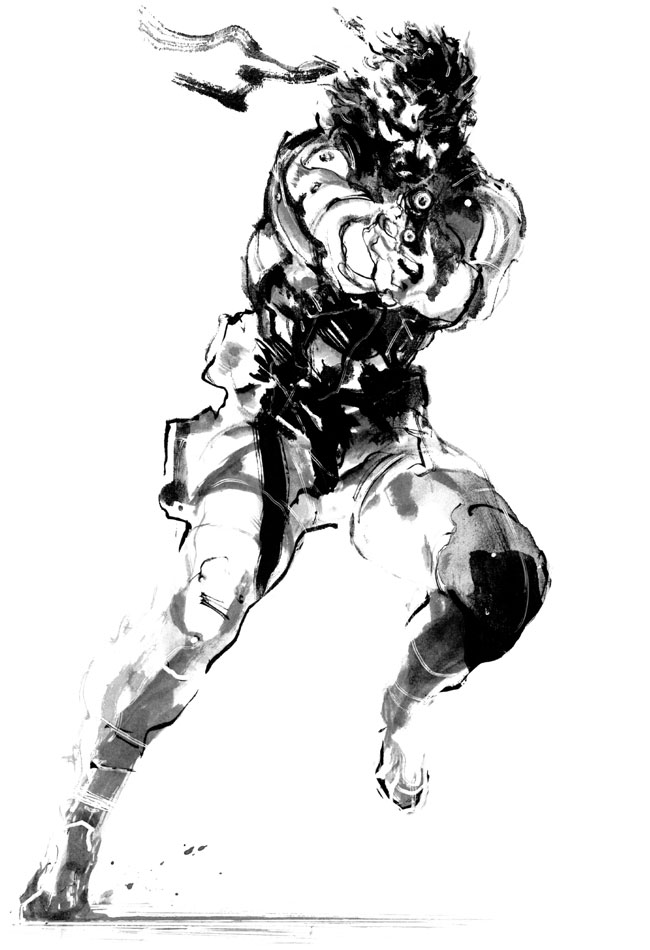 This is a technique used to reach a deep voice and it is often used in villains. The Wikia All The Tropes explains:

"A character who speaks with a deep, throaty rasp. This style of speaking gives the character an ominous or solemn tone, so it's usually the domain of Anti Heroes, protagonists of Darker and Edgier works, and villains."

In gaming, this technique is mostly known for the protagonists of the Metal Gear franchise, Solid Snake (right) and Big Boss. Its technical name is "vocal fry", according to the aforementioned Wikia page.

The Wikipedia entry for "vocal fry" clarifies the science behind this technique:

"It is produced through a loose glottal closure which will permit air to bubble through slowly with a popping or rattling sound of a very low frequency. During this phonation, the arytenoid cartilages in the larynx are drawn together which causes the vocal folds to compress rather tightly and become relatively slack and compact. This process forms a large and irregularly vibrating mass within the vocal folds that produces the characteristic low popping or rattling sound when air passes through the glottal closure."

This technique is often used in characters that need to withstand pain and/or scream, as shown in the video below from Metal Gear Solid, where Solid Snake speaks in the torture room.

This technique can be also used to make a character sound older than the actor.

Putting Both Techniques Together

It is important to note that the universe of voice acting consists of enough techniques to fill a book  -- and through this article, we've only covered the basic principles of two of the most common ones.

Falsetto allows to create a high voice, whereas Vocal Fry emits a deep sound. But to make tens or even hundreds of characters come to life, an actor must know how to use the proper amount of both techniques to create a vast range of different voices.

This requires immense focus from the actor, to deliver the voice the developer wants and also to maintain the same voice through lots of hours of recording in the booth. Becoming a voice actor requires more dedication and focus than most people would imagine.

It is not about just speaking on a microphone.