Of 9 VR Devices, which is the best for you?

1 of 10
Next
by Sagger Khraishi

Virtual Reality and Augmented Reality have been taking the world by storm. From playing games to design, we have put together a list of the top nine headsets you should check out depending on your budget. From $20 to $3,000, we go over the pros and cons of each device. So, lets start with number nine, Google Cardboard.

Google Cardboard is the cheapest solution to your immediate Virtual Reality needs. It's easy to put together, or you can get it pre-made at various stores. While it came out earlier last year for Android Devices, a new model is now available for the iOS crowd.

You can purchase your Google Cardboard here.

As an over glorified Google Cardboard, the Freefly VR is a mobile headset that uses your phone. It offers a 120 degree view and straps to your head. Plastic casing holds it together with built in clamps to hold the device. There is a lack of ventilation though, which can cause overheating.

It comes with a joystick that helps you interact with the VR apps, but if you are using an iOS above 9.2 then you won't get much out of that. 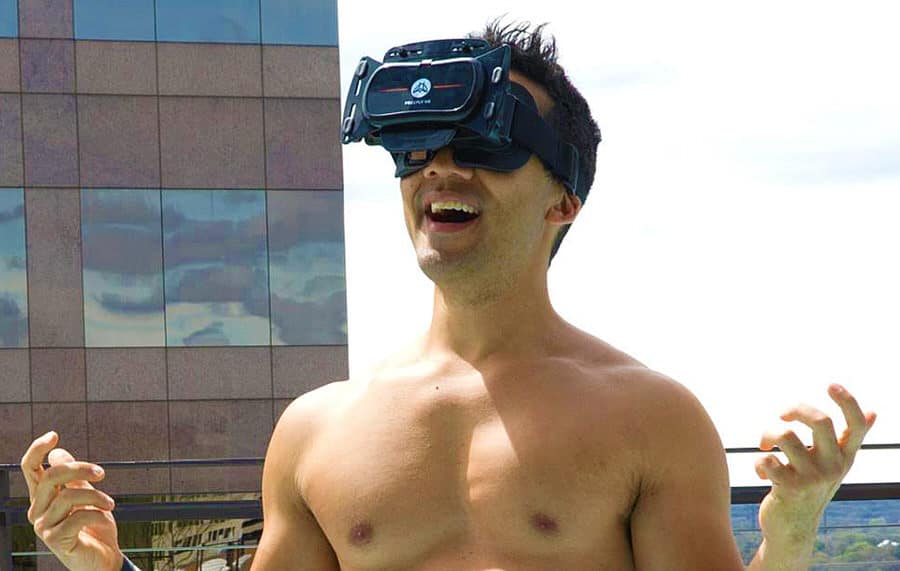 If someone gave you the Freefly VR as a gift, it wouldn't be something you would return at the $79 price tag. However, while choosing to buy it for yourself, it might be better to use Google Cardboard or to use number seven. At least this way you won't mistake them for goggles next time you go swimming.

If you want to get a Freefly VR, check out this Amazon listing.

Currently available on the market, the Samsung Gear VR boasts a clean design compared to the Freefly VR, and it is pretty easy to use. But it's for Samsung Devices, which means if you are using an iPhone, you are out of luck.

There's a tracker built in on the side, a back button, and also a way for you to control the volume. If you are worried about getting motion sickness, you should keep in mind that there isn't a positional tracker with the device--mainly because the phone isn't powerful enough for it yet.

Personally, I ran into two issues while using it. The first was with the tracker being to the side of the helmet. Playing games on it felt like I was tapping the side of my head the entire time. Plus, keeping my arm up the entire time reminded me that I needed to exercise a bit more. The second thing that would make or break a decision is that I wear glasses. So while I didn't really get the feeling of putting on 3D glasses at the cinema on top of my glasses, I had to remove my glasses after a few minutes of using it.

Another issue that you can run into using the Samsung Gear VR is that you are basically using your phone to power up the entire device. Keeping that in mind, if you don't have a compatible Samsung device for the set, then the price would jump up (if you wanted to use a Galaxy S7 edge device, then you'll be shelling out almost $900 for the set)

So, if you're planning on spending a bit more than $99, but less than $900, check out the Razer OSVR. If you are dead set on getting the Samsung Gear VR, you can find it here.

If you are a developer who's looking at this article, then chances are you are trying to find something that lets you enter the Virtual Reality and Augmented Reality field instead of looking for entertainment. Razer's OSVR allows you to do just that.

Marketed as an Android for the Virtual Reality field, this open source headset can be taken apart or upgraded as you see fit to come closer to building your perfect hardware. The software is also open source under the Apache License.

While it remains cheaper than other dev kits, this would be the first real option for the average budget savvy engineer. But as a consumer, this headset isn't geared towards you, so you should skip on to the FOVE VR for your gaming needs.

If Razor OSVR is for you, you can buy it here.

The FOVE VR launched a successful Kickstarter around the notion of its eye tracking capabilities, and it delivers.

It's aimed at PC use, which separates it from earlier headsets that augment with mobile. It's a bit heavier than the Samsung Gear VR. It boasts a 100 degree view while wearing the headset, and it has a larger screen size than the Oculus Rift at 5.7".

If you are looking at gaming with your headset, then being able to track and play with your eye movement should be a bigger sell for you (preorder it here), but if you're looking for something that can add to your existing console, then maybe the Sony PlayStation VR would be the thing for you.

If you are looking for a VR experience kind of like stepping into the game world, then the Sony Playstation VR would be a good bet. It doesn't offer eye tracking, but instead is position based off of the PlayStation Camera (if you don't have that, then you will need to make a separate purchase). It has a smoother frame rate of 120 Hz, which is better than the Oculus and HTC Vive at 90 Hz.

While it boasts a nice design, for the time being you will be stuck to using the PlayStation with this device. So if you are looking for something that can add to your PlayStation gameplay, then this would be something of interest to you, so pre-order here. Otherwise you should check out the Oculus Rift.

The Oculus Rift was the precursor to this wave of VR and AR devices, but first doesn't mean best. It is currently limited to your PC and Xbox One, with a tether that doesn't allow mobile coffee shop usage. At launch, it doesn't have access to touch controls like the HTC Vive either.

If your PC isn't up to par for it, you will have some lag showing for the rendering. But if you do have the best of the best system to back it up, then you will have a rendered immersive world that can be quite worth the cost.

The haptic feedback controllers will be available on March 28th, but until then you will be stuck to using the Xbox One or keyboard for movement. If you're interested, here's a list of the different games available on launch for the rift.

If you want more movement, check out the HTC Vive at number 2 in our list, but if you want to buy the Rift, here is a Best Buy listing.

The HTC Vive works with your PC and Mac, as well as Linux. While this may seem a lot more expensive than the competition, barring one, this might be the best option if you have the space for it.

With two cameras, it maps out your surrounding area so that you can walk around the immediate area, but you shouldn't worry about crashing into objects or walls as there is a light blue room that gently reminds you they exist.

With two controllers that give you access to the world, a smooth trackpad allows you to move around instead of pressing clunky buttons. An issue you might run into is that this isn't a standalone headset, as in you will have a 5 meter cable attached to the headset. So, if you decide this is the one for you, be careful of tripping. If this is what you want, you can find a bit more information here or get a pre-order version here.

But if you have the budget for it, and you are still not convinced, check out the Microsoft HoloLens. While Microsoft HoloLens doesn't focus on VR as much as Augmented Reality, it does bring a different experience to the table. Through a standalone device, with no additional cables or mobile device or computer necessary, it brings what you would normally interact with on screen in front of you.

By using your voice and hands you can then play games, create a 3d model, Skype, and so much more. Another thing that makes it pretty amazing is that you can share the augmented reality with someone else using their Microsoft HoloLens. Imagine you are playing Civilization 5 on the train using a book as the table to scan around for the opponent. Or if you are playing Minecraft like the demo below:

The developer's version comes out on March 30th, with the consumer version emerging around Christmas. While it has an impressive standby time of about two weeks, the device itself has a play time of 2 - 3 hours. The technology has impressed even NASA who uses it for their projects.

If you are looking for something that you can both work and play with in almost every industry, then this is the device for you. You can order it here.