How to play Gwent in The Witcher 3: Wild Hunt

Not sure how to play Gwent? Here's an overview of the rules!
by Ford James

Gwent is a card game introduced in The Witcher 3: Wild Hunt by CD Projekt Red.

Being a Witcher can be stressful and arduous at times, so it’s nice to sit down with an ale in hand and gamble away your hard earned crowns. Gwent definitely has its flaws, but as a minigame it’s a solid addition to an already magnificent game. While there is a tutorial for your first ever Gwent game in the White Orchard inn, a lot of players don’t play for a while after then when they come back to it they’re confused. If you’re one of those players or you just fancy a refresher course, this is for you!

For anyone interested in playing Gwent but unfamiliar how it works; it’s supposed to simulate two armies in battle. You have three types of Unit cards: Close Combat, Ranged and Siege. These go in their respective rows on the Gwent board and many have additional bonuses, such as being able to draw a card from your discard pile and play it instantly or increasing every other card’s attack power of the same type by 1 point. 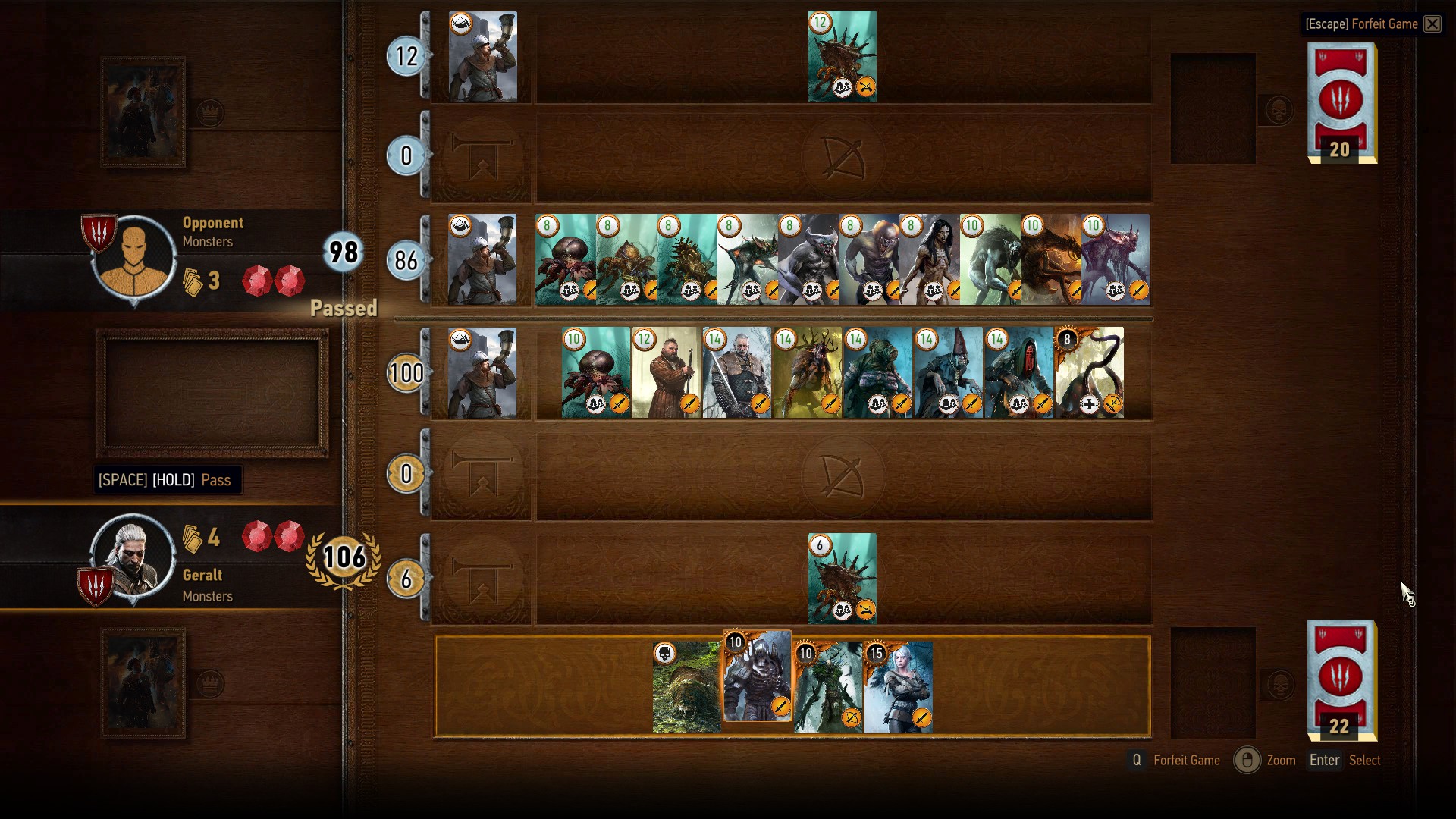 A high scoring first round with two Monster decks

Each card has an attack power, ranging from 1-10 and two special Hero cards with 15. Hero cards are notable characters from the Witcher series, such as John Natalis and Iorveth and are immune to all positive and negative effects caused by other cards. Previously mentioned were the Northern Realms and Nilfgaardian Empire faction decks, however there are also two more; Scoia-tael and Monsters. Each faction has a specific bonus, for example Scoia’tael gives you the option to choose who goes first while Nilfgaardian Empire wins any round that ends in a draw.

The objective of the game is simply to have a higher total attack score than your opponent at the end of each round and to win 2 out of 3 rounds. Each player draws 10 cards at the start of the game and has to figure out how to best utilise all 10 without drawing any new cards. It’s a good idea not to go all out in the first round as you risk losing rounds 2 and 3. 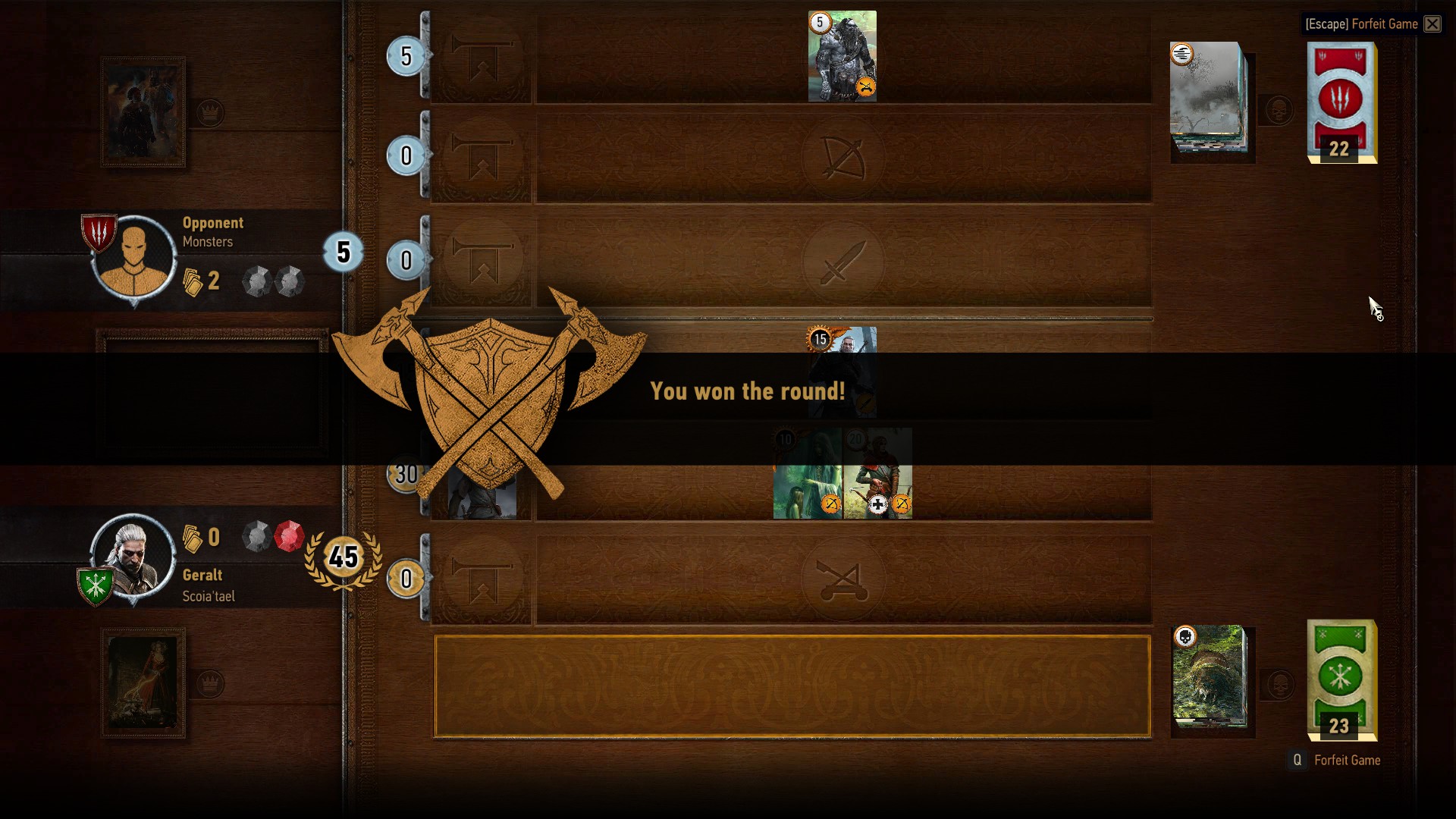 A dominating performance in the final round

You can also get special cards with various bonuses, for example there’s 3 different weather cards which take all Close Combat, Ranged or Siege cards down to 1 attack power for that round, or you can get a Commander’s Horn which doubles the attack power of all the unit cards on a selected row. Each faction also has 4 different card variations of their leader; an example of this would be Emyr van Emhreis is the leader for the Nilfgaardian Empire and you can choose which bonus to start with. One is the ability to draw a card from your opponent’s discard pile while another is to look at 3 random cards in your opponent’s hand.

Scorch - Destroys the highest rated card(s) on the board

Decoy - Retreat one card back to your hand

Morale Boost - Boost every card on one row by 1 point, except for the played card

Hero - Not affected by any positive or negative effects

Tight Bond - When placed next to an identical card, both cards double in power. Triple if there is 3 identical cards next to one another

Agile - Can be played in either Close Combat or Ranged

The Siegemaster - Double the strength of your Siege units, provided a Commander’s Horn isn’t already in play

Lord Commander of the North - Clear all weather effects from play

The Beautiful - Double the strength of your Ranged units, provided a Commander’s Horn isn’t already in play

King of the Wild Hunt - Double the strength of your Close Combat units, provided a Commander’s Horn isn’t already in play

Interested in playing Gwent versus your friends? Now you can with the Gwent Tabletop Simulator Mod!

Struggling to win at Gwent? Here's my Top Ten Tips for Gwent!