What If We Could Stop Killing Enemies in Deus Ex: Mankind Divided?

What if for once, being an expert marksman means you didn't have to kill anyone?
by Elijah Beahm

Often times, with even the most flexible games like Deus Ex, we are faced with a situation in first person games where we must choose to kill a fellow human being in-game. Sometimes it's because the game is scripted that way. Other times it is because they caught is sneaking around a corner. But there's a problem with this traditional "stealth or kill" dicotomy that so many first person games depend upon.

What if there's an alternative to that?

You see, in real life, killing is meant to be the final option. You don't go into an arrest with guns blazing and you don't stop a man from running by headshooting him. Yet, in our shooters, we rarely consider the fact that the act of shooting itself doesn't have to be lethal. We're so used to this "no matter where you shoot, the guy just dies" mentality that we've diluted what real life shooting is like.

Take for instance, the example of Deus Ex: Human Revolution. If you shoot a man in his leg, he doesn't even stumble. All it does is register to the game that you have delivered "X" damage to him. It won't matter if he's a regular human or a cyborg; the reaction is always that of a machine, not a human. 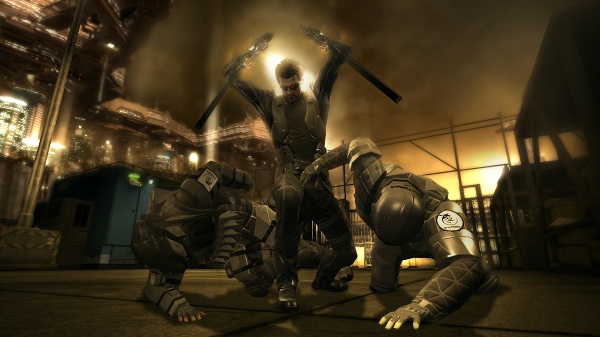 Nope, can't be bothered to just stab/shoot your hands.

Do you know what would happen if you shot a man in the leg in real life? He'd probably lose his footing, maybe grab it in pain, and/or hastily shoot back but has a much higher chance of missing. If you shot him in the arm, he might not be able to even hold a gun properly. He'd be incapable of being a serious threat, and be more busy struggling to survive. He might even beg for his life, if he isn't brave.

So why is it we don't have this kind of "death state" for games? We can simulate an enemy being taken out quietly in a non-lethal fashion, why is a loud and painful means only available in a handful of games, and even then, be limited to essentially the same as a non-lethal takedown. A knockout in Arkham City is just as much a kill as in a shooter, it's just painted differently.

What if instead, in Deus Ex Mankind Divided, we could choose to wound or cripple enemies? For once, a non-lethal playthrough does not require you just use the most overtly PG means of disabling opponents. Instead, you walk the line between protector and vigilante. If Daredevil, Batman, and more can all have a no killing rule, why can't Adam Jensen or any other role playing shooter protagonist do it too?

Given the choice, players finally have to face the reality of what shooting their opponents would mean.

It lets us frame the concept of taking a person's life as a much more personal and visceral thing, rather than simply taking out an PC. Sure, you can just pop headshots and not ask questions, but you actually have a middleground now. You can be the ghost, or you can be the non-lethal John Wick.

For some, that might be a fun new challenge all to itself. To be so talented that you don't even need to get a killshot could be as enticing and rewarding as to slip through unnoticed. The kinetics and speed would be something brand new yet fit the pacing Eidos' Deus Ex prequels have always aimed for.

They could take a note from Dead Space as well, and make enemy design that emphasize certain weaknesses and strengths in their armor and augmentations. Maybe one guy has armored arms but his knees are exposed. Another is a walking tank, but you can break the armor on his gauntlets and make him drop his gatling gun. The potential offered here would be quite intriguing all on its own.

Now, is this actually going to happen?

Sadly, probably not; but that doesn't mean the notion should be dropped. As our games try harder and harder to be taken seriously, we need to recognize the simpler things that we experience in the real world but not in games.

A bullet sponge enemy is fine for something like Gears of War, but for more sophisticated games, we aught to have more depth and believability to them. Personally, I really look forward to the day I can go through a shooter and not have to kill everyone, but still use my favorite guns. Until then, I'll keep using my stun gun, tranq rifle, and stealth takedowns.