HyperX Cloud Revolver S Review: This Headset Has Ruined Me for Life

This flagship headset from HyperX may not be the fanciest in its price range, but the Revolver S is by far the best surround sound experience you can buy.
by Auverin Morrow

Anyone who has seen the excessive collection of headsets in my office knows that I'm a big fan of HyperX. From the Stinger to the Cloud models, I've tried nearly every headset in their lineup -- and I've loved them all. But after getting my hands on their top-of-the-line Cloud Revolver S, I won't be able to go back to those headsets...or any other headset for that matter.

I got to test out the Revolver S at PAX East this year, and was quite impressed with what I saw in that demo. Now that I've spent a little more time with this headset and run it through the wringer of gaming marathons, music sessions, and Skype calls, I've gotta say I'm only more impressed than I was initially.

This set of cans offers great surround sound, long-lasting comfort, and so much more. To put it plainly, the Revolver S is probably the best gaming headset I've ever used.

Like most HyperX headsets, the Revolver S doesn't have a lot of frills in its box -- just the headset with a 3.5mm jack, the detachable microphone, and a USB attachment with inline controls for chat/audio volume, and toggle buttons for muting the mic and turning on surround sound.

Because this headset isn't wireless, there isn't a need for lots of adapters, charging cables, and the like. As someone who tends to lose cables and small attachments, the minimalism on this front is appealing. I don't need a lot of bells and whistles if the headset is doing its job properly.

The Revolver S itself sports the proprietary HyperX design -- a sleek black body with a lightweight steel frame, a padded leather headband, and memory foam ear cups. The usual red accents, even down to the stitching, have been replaced with white on this headset. It's a subtle change, but one that makes the Revolver S feel like it isn't trying quite as hard to be an edgy-looking gamer peripheral. The industrial, vaguely cyberpunk aesthetic of its construction oozes hardcore chic all on its own.

This flagship headset is insanely comfortable. It might not have "cutting-edge" headband technology like the SteelSeries Arctis 7, but it doesn't really need it. The build is so sound that even after an 8-hour workday and a 6-hour Paladins marathon, I wasn't chomping at the bit to give my head a break from this set of cans.

The suspension headband does an excellent job of evenly distributing its 12-ounce weight across your skull, and the ear cups are the perfect size -- tight enough to get the sound where it needed to be, but roomy enough that my piercings and glasses weren't cramped. Where I found the Arctis 7 to be a little too snug for long-term wear, the Revolver S sits so comfortably that I often didn't notice I was wearing it at all. It's soft, it's breathable, and it doesn't put pressure in the wrong places no matter how long you leave it on.

It's not wireless, but it doesn't need to be.

While most other headsets in this price range have wireless functionality, the Revolver S sticks to a wired design with durable braided cables. This might be a fault to those gamers who like the extra mobility, but I never found myself wishing that it had a wireless option.

When used with the USB attachment, the cord on this headset was long enough that I could do most anything I needed to without taking it off. Though I couldn't leave my office entirely and keep chatting with my party while making a snack, I could easily roll my desk chair across the room to grab something without having to extract myself from my headphones first.

Fantastic Sound All Around

The Revolver S packs in 7.1 surround sound, which you can turn on and off at will with the controls on its cable. Being able to toggle DTS on the fly is pretty nice, especially for someone who spends a lot of time switching between programs and uses. If I had to pause my ambient music to hop into a Skype call, I could quickly turn off surround sound so that my co-workers' voices didn't boom and echo like some sort of dramatic cut-scene narration.

The surround sound handles beautifully in-game, and packs a serious punch when it comes to sound effects. Enemy positioning was easy to pick out in Paladins, which was bad news for any flanker looking to catch me from behind. While playing SMITE, I could catch Arachne scuttling around my periphery or side-step a Kukulkan ult without actually having to turn and look for its trajectory animation.

Not today, Kukulkan. Not today....

In a more aurally balanced game like Skyrim Special Edition, the ambient world noises blended beautifully with its epic soundtrack. NPC dialogue came through crisp and clear, and I could hear the screeches of an approaching dragon from a mile away. Never before has the dripping sarcasm about stolen sweetrolls been more evident.

The Revolver S also breathed new life into my favorite films and music.

When I was out of game, the surround sound still held up while watching movies or listening to music. The deep-space sounds of Interstellar were crystal clear, and ghostly creaks in movies like The Innkeepers felt real enough to send shivers up my spine. But the real treat came while watching Inglorious Basterds. During its iconic baseball bat scene, the foreboding clangs of Donny Donowitz's slugger against the tunnel walls reverberated from one ear to another in a way that was arguably more impactful than when I first saw it in theaters.

The Revolver S is also an excellent set of cans for enjoying music. Whether I was listening to low-fi jazzhop during my workday or jamming out to electric guitar riffs while painting, the sound was always beautiful and full-bodied. It was particularly interesting to toggle the surround sound on and off just to see the difference it made. This is precisely what HyperX PR Manager Mark Tekunoff did for me when I demoed the headset at PAX East, and it really showcases how much depth the surround sound adds to your listening experience.

Even songs I've listened to a hundred times -- from the orchestral arrangements of The Airborne Toxic Event to thumping bass drops from my DJ friends -- surprised me with how much better they sounded through this headset.

Surround sound aside, the stereo mode is also fairly impressive.

A lot of surround sound headsets tend to fall off pretty hard when it comes to regular stereo mode, but that's not the case with the Revolver S. Though the sound obviously flattens out when you toggle DTS off, what remains is still very rich and well-balanced.

HyperX doesn't offer any sort of equalization software to let you fine-tune your sound output, but the inline controls on this headset do allow you to adjust the general audio profile on the fly. You can cycle through four different settings using a switch on the side -- with options balance across the board, or emphasis on the bass, mid, and treble levels respectively. While using this function obviously won't give you the same sort of control as full-blown EQ software, it's more than enough to give you a good range of customizable sound.

At first glance, it's easy to dismiss the Revolver S because it doesn't have all the fancy features that something like the Arctis 7 does. There are lots of wireless headsets in this price range with complex software, innovative designs, and myriad functions.

But if you want a headset that truly excels at the sole purpose it's made for, you can't beat the Revolver S. The sound quality is truly incredible, and it offers a sort of long-lasting comfort that I thought was impossible to find in a gaming peripheral. And if you're the sort of person (like myself) who can't really be bothered to spend hours fine-tuning your sound profiles or messing with a wireless setup, you can't beat the plug-and-play experience this headset offers.

All in all, the Revolver S looks and feels like a truly professional headset. It doesn't pander to gamers who need a bunch of extra features to feel like they're getting the most for their money -- instead, it simply offers unbeatable sound quality and consistent comfort that speaks for itself. Even if you're used to having all those gamertastic extras, I doubt you'll miss them once you give this headset a try.

I know it's gonna be a long, long time before I want to use anything else.

If you want to pick up the Revolver S for yourself, you can find it for $149.99 on Amazon. 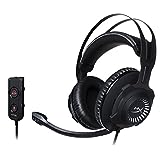 Note: HyperX provided the Revolver S used for this review.

Our Rating
10
This flagship headset from HyperX may not be the fanciest in its price range, but the Revolver S is by far the best surround sound experience you can buy.