Rides With Strangers is Fantastically Eerie

Rides With Strangers is the realistic survival horror game that we've all been waiting for.
by Paige McGovern

Rides With Strangers is an upcoming survival horror game that had all of YouTube spooked, at least after its successful Kickstarter and concept demo released last year.

Created by indie game developer Reflect Studios, Rides With Strangers tells the story of Elora, an accomplished young woman driving to her dream job interview when her car breaks down. Left stranded late at night, Elora must hitchhike her way to her destination. She soon discovers all her drivers have twisted, hidden agendas. Consequently, her race to the interview becomes a race to save her own life.

Elora is played in first person. With this view, players can feel as if they are trapped with the stranger themselves. Of course, the jump scares have much more of an impact this way. Not to mention the times I stole a glance at the driver, only to find him looking right back. Shivers. Elora could not get to her destination fast enough!

Only as the game is still in development, it's only possible to review the available demo. However, this demo is nothing to scoff at.

First off, it's clear the developers have aimed for realism. They have stated on their website that Rides With Strangers "forces you from your comfort zone and into a terrifying atmosphere that exists within the outside world." The only stranger featured in the demo, the Father, is a God-fearing priest. The voice of this predator, combined with his carefully crafted dialogue and appearance, can make anyone feel uneasy. 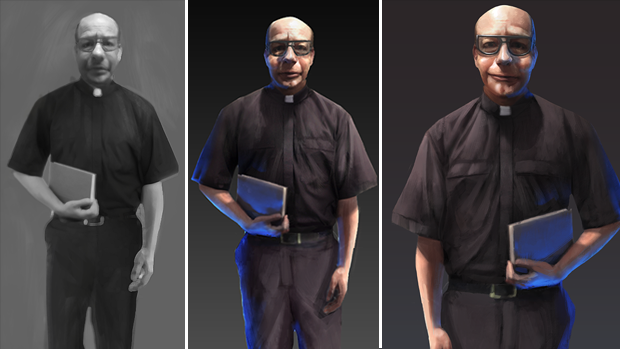 The Father has his own elaborate backstory, revealed throughout the dialogue. The player has several responses to say back to him, and must choose wisely and act quickly where necessary. The stranger is watching, and there's no time to waste.

The fact that the game's protagonist is a hopeful young college student, who is experiencing one bad night only adds to the realistic feel of the game. Anyone could find themselves in Elora's predicament.

Given the lack of other strangers in the demo, players are forced to be picked up by the Father every time. This means that there isn't much potential for interesting replays.

However, this shouldn't be the case when the full game is launched and new strangers are introduced.

It should be noted that Rides With Strangers is not for everyone. Only mature audiences should consider playing. Topics that are either implied or explicitly stated in the game include kidnapping, pedophilia, and murder. The player's dialogue options also contain a lot of profanity.

Overall, I found the Rides With Stranger concept demo to be very enjoyable. If you're a mature gamer who loves horror and survival games, this will be the game for you. Can't wait to play Rides With Strangers? The concept demo can be downloaded for free from GameJolt.