The most awkward moments for gamers (NSFW) "Oh, honey, I didn't see you there!"

Oh, video games! They're wonderful things, even when they have us feeling like creepy weirdos that shouldn't be allowed to interact with the general public.
by katlaborde

Have you ever found yourself innocently enjoying a video game, when out of nowhere, you come across a scene that makes you cock your eyebrows? What about when you're innocently playing a video game and your parents or significant other walks in during that awkward scene?

Well, here's to hoping you've not being shipped off to some camp for troubled teens or out on the street while the love of your life burns your Xbox.

Well, to start with, this game doesn't really have anything that makes it stand out from any other first-person shooter apart from the fact that it's just terrible. But amongst all the crappiness that is Duke Nukem Forever, there is one sequence that will make you question the writers' sense of humor... if that's what they we're going for at least.

This sequence involves an alien nest with numerous topless women fused into the organic walls. Walls complete with punchable boobs, mind you. In a scene that feels more like somebody's sexual fetish nightmare more than anything else, you find your twin 'babes' within the horrific sanctum secreted to the environment like all of the other unfortunate souls.

What happens next seems out of place for a game that's attempting to be funny when the twins' stomachs promptly inflate before they explode into a horde of baby aliens. Not only is this game a mess, but this particular scene does a great job of making you feel like a weirdo.

Sheesh. I hope Tina knows how to use the litter box.

Okay, simply turning on Xtreme Beach Volleyball is enough of a reason to lock your door and shut the blinds, but there's an added photography mode that would make anyone feel like a peeping tom.

We all know volleyball can be a very tiring game with all that jumping, bouncing, and jiggling, and no sports bras. Eventually, the all-female cast wants to take a bit of a breather. And what better way than a provocative and awkward photo shoot with the DOA girls? That's right, you better hope you're home alone tonight because you, your Nikon, and Kasumi have a date with a wide angle lens. Oh, yeah, and you can watch the girls pole dance, too. Why not, right?

There are multiple moments in this game that I could go over, like the final boss fight that involves Satan's very floppy-- um-- thing-- but I thought I'd focus on something a tad stranger.

I never thought I'd see the day where I was thrust into a fight with a fifty-foot woman who possesses the very unusual ability to spew spiders from her boobs. But thanks to Visceral Games, I can now say I've seen it all.

After facing off against a certain boss that summons forth hordes of spider monsters from her bosom (refer to segment header for clarification as to exactly where from her bosom) your husband or boyfriend may not look at boobs the same way for a while. Unless he's into that, then, you know... all to their own, I guess. I'm assuming that the developers of this game were going for shock value, and you know what, they succeeded. 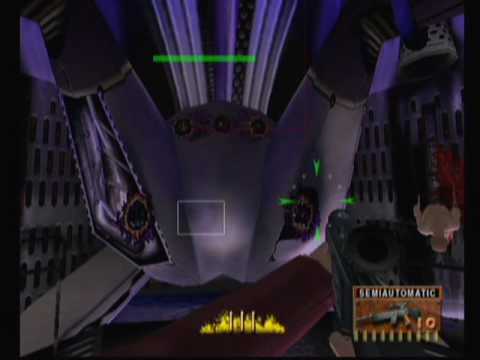 If you're one of the few people on this planet that's actually played or even heard of D2, somebody would probably be like 'what the hell are you playing' if they walked in on any moment. But towards the game's conclusion, you come across a giant, sentient computer.

Apparently, it's supposed to be your mother. As Kenji Ino is known for lacking any subtlety, the massive computer happens to have an uncanny resemblance to a woman's thighs spread eagle, complete with weird goo that sprays from it when shot. I mean, there's not that much more to say, the picture above says it all.

Size matters: Shadows of the Damned

Alright, imagine this: You're sitting in the living room after a long day of school playing Suda 51's Shadows of the Damned. Nothing wrong here, right? It's just a quirky 3rd person shooter, nothing out of the ordinary.

That is until your mom walks in with a plate piled high with pizza rolls, and the speakers to your super expensive sound system shout 'TASTE MY BIG BONER!' Well, those pizza rolls go flying through the air as your poor mother is taken aback by the exclamation, immediately passing out from overwhelming shock. And only making matters worse, your 4-year-old brother was sitting next to you the whole time.

Now, during every Christmas dinner, the table is filled with joyous conversations sprinkled with the angelic voice of a toddler screaming 'TASTE MY BIG BONER!' every 3 minutes. Let's just be thankful that your mom was still unconscious by the time you found yourself running across a giant-sized incarnation of the main character's nude girlfriend.

We all know the Metal Gear Solid series has a knack for being strange from time to time, but none of its weirdness is enough to make us blush. Well, almost none of it at least.

During the game's confusing finale, we find Raiden in his birthday suit. If that wasn't shocking enough, we are then given the pleasure of controlling the clothesless pretty boy through an underground base where he can perform various flips and other nimble acrobatics. Amazingly, he manages to pull off all of this maneuverability while keeping his junk firmly secured by his cupped hand.

At this point, you really wouldn't think Raiden would be all that concerned about a few guards seeing his member. I mean, he's already willing to perform a cartwheel naked.

There you have it, the weirdest moments in gaming that are sure to ruin any romantic or family relationship. So what games had you stumbling like a red-handed pervert for the power button to your T.V.?

Let me know in the comments below!... I promise I won't judge.