Shadow of Mordor Review: My Precious

Shadow of Mordor is a beautiful game with some sick combat that's geuinely fun. The gameplay is the real star of this show and it's one worth getting at full price.
by Farrel Nobel

Shadow of Mordor was made by Monolith Studios. You might know them from some games like the famous F.E.A.R series. Kinda strange of them to be making something like Mordor.

The story revolves around Talion, a Ranger who very early in the game had to watch Sauron's forces kill his family in front of him. Needless to say, it was an infuriating scene that made me want to tear up any orc in sight to 2 pieces. Talion actually dies in the beginning of the game but is reborn with the help of Celebrimbor, a Wraith that gives Talion some power to help avenge the death of his family. It's a pretty straightforward and decent revenge story although there's nothing noteworthy about it.

Graphically speaking, the game looks good. Textures are fleshed out and I didn't notice any graphical pop-in at all in the game. Lighting and shadows are well-done as well and overall a decent job as well. It was kind of odd that the actual gameplay graphics fared better than the cut scenes though. I always thought that was something straight from the PS2 days. 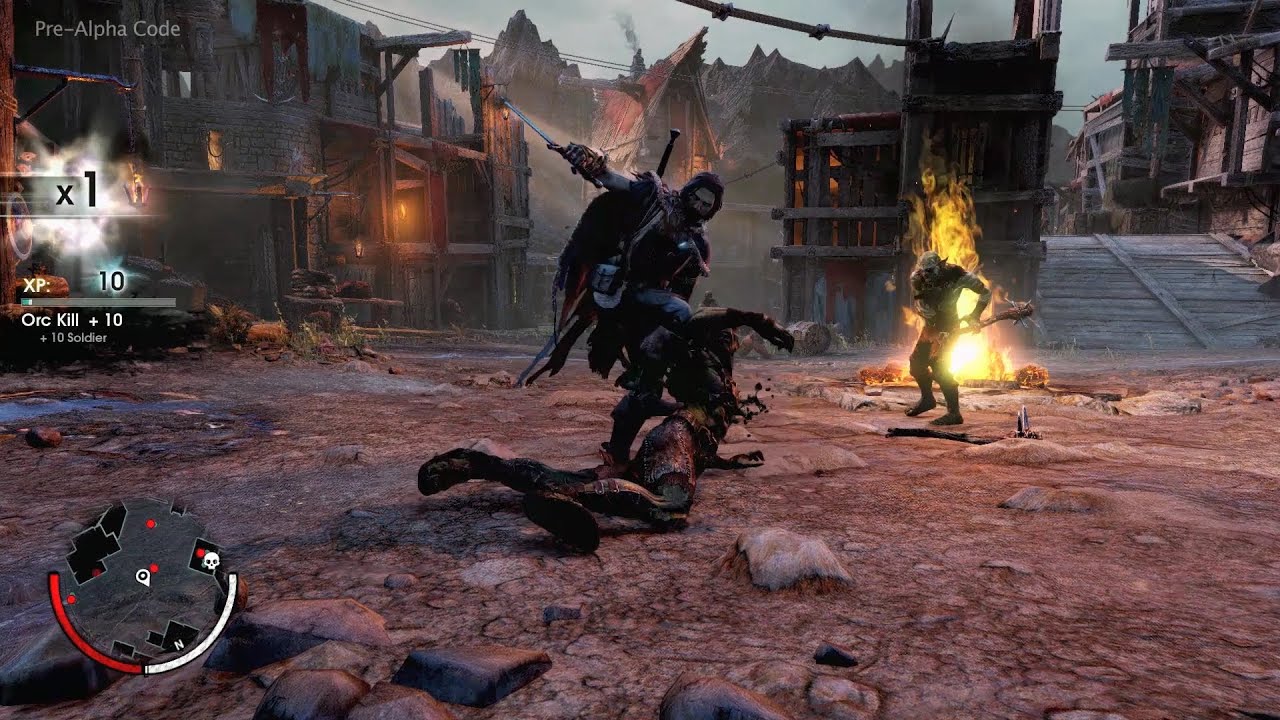 The voice acting of the characters are quiet good with some bits of humor here and there. Accompanying the graphics and voice acting with some spot on sound design, especially when you're slicing enemy heads off, and you've got yourself an immersive game.

This is probably where the bulk of the review is going to be. The gameplay is the main selling point of this IP, mainly the nemesis system but more on that later.

I had trouble taking a liking to the gameplay at first because it was so hard. Literally hordes and hordes of orcs would surround you and your attacks feel so weak (plus I didn't know how to use the combat executions until halfway into the game) and you barely have any skills to kill a whole bunch of orcs. To anyone who's going through the same problem that I did. Fear not, just give the game some time and I promise you will be rewarded.

The character progression might not be great and explained properly but once you get the hang of it, it's a pretty deep and fulfilling game. Leveling up wasn't something that you had to do, it was something you WANTED to do. Each skill point that goes into a certain skill, be it your sword, dagger or bow and felt like it really made a difference. Especially when you get the shadow lethal strike. Some people might argue that as you get closer and closer to end game the gets too easy. I say that's true. But it's not neccessarily a bad thing. As you kill more and more orcs and do more missions, you're supppose to get better and more badass. By the time you get to the last boss you should be killing orcs in your sleep!

There aren't 20 different kinds of missions that are pointless to do in the game, rather there are a few types of missions in the game but each one feels like it mattered and will impact the story. There are missions where you can sabotage the Uruk hierarchy by interrupting captains while they feast, recruit new orcs or duel with other captains, there are also missions uncover the legend of each of your weapons and they're fun as hell to do too. Completing those missions lets you unlock skills like unlimited combat executions for 30 seconds.

You can also equip runes that you can get from killing captains and warchiefs. These runes give you boosts to your arsenal like regenerating health when doing a successful stealth kill or so. They're just fun things to play around with in the game.

But the real star of the gameplay in Shadow of Mordor is definitely the Nemesis system. in which you can literally kill an entire army of orcs and uruks. The way it works is that warchiefs are supported by their captains and captains have other minions with them. Sort of like a gang. At times, these captains can clash as all the captains and other orc warriors want a higher place in the Uruk pyramid. Some are looking to recruit more warriors and others are just trying to increase their Power ranking by doing hunts and duels with other Captains. The way it works is if one of the captains die, someone from the bottom will take his place. And if a normal orc kills you, he gets to be promoted to captain. eventually, they become warchiefs. Early in the game, the main objective is to basically kill all the warchiefs since you haven't unlocked the fun abilities yet. But killing the warchiefs isn't an easy task. It's best if you can gain intel on them by interrogating certain orcs who have intel or finding intel in orc camps. From here you can find their strengths and weakness which you can use to your advantage. Some are vulnerable to fire while others run away at the sight of beasts.

I especially enjoy the challenges you have to do to draw the Warchief out. Some of these challenges are quiet simple like grabbing an uruk officer for 15 seconds while others are more difficult requiring you to skill X number of uruks in under 2 minutes. (I got stuck on that one for a long while).

I think what I loved most about the game is how it successfully blends normal swordplay with stealth, as well as shooter elements in the sword, dagger and bow. Everything feels in perfect balance with the 3 and the game makes you use those weapons appropriately in a not-forced sort of way . The animations are smooth and nice and combat is genuinely really fun. Can't say that about a lot of games today.

However, what I didn't like was that the main boss battle at the end is a freaking QTE (Quick Time Events), and not a very hard one at that. No doubt many fans were really disappointed with this and wished we could've fought Sauron head on. I also felt that the graphics could've been much better and made the game and environments look more beautiful.

Other than that though, I really can't complain. Shadow of Mordor is a very good game especially in regards to the bad year 2014 has been having. Even though some websites crowned this as their game of the year, I didn't feel the same. Mordor is a great game but compared to other game of the year games? It just misses the cut by a bit. Nonetheless, it's an excellent game that you should definitely get if you own a next-gen console.

Our Rating
8
Shadow of Mordor is a beautiful game with some sick combat that's geuinely fun. The gameplay is the real star of this show and it's one worth getting at full price.
Reviewed On: Playstation 4
What Our Ratings Mean