It's time we had a new game we could make our own, again.
by Jessa Rittenhouse

In recent years, we've seen a lot of attempts to bring Dungeons & Dragons and other tabletop RPGs to modern PC gamers in the MMORPG format to varying levels of success (Dungeons & Dragons Online and the Neverwinter MMO being only two such examples), but each of these lacked the feel of a good old-fashioned tabletop campaign.

There's no replacing the sense of accomplishment at the end of a good player-driven story campaign with the pre-scripted quests common in MMOs. MMOs have their good points, but they often miss the point behind role-playing games. It's time to bring tabletop gaming back to the PC in a way that hasn't been seen since the Neverwinter Nights series.

Be anyone you want to be.

Where Our Journey Begins

In June of 2002, BioWare released Neverwinter Nights, a role-playing video game with single and multiplayer modes of play and utilized the Dungeons & Dragons 3rd edition core ruleset. This was not, in itself, new; BioWare had already breathed new life into the PC role-playing game genre with the release of Baldur's Gate in 1998.

With the Aurora toolset, if you could dream it, you could (probably) do it.

Players could create and host servers with entire persistent worlds where they could meet other like-minded D&D players from around the world, and run stories in an on-going setting on a much larger scale than your typical tabletop group of four or five people.

Servers could be hosted with an entire staff of Dungeon Masters, with quests being run at any given point in the day or night. New content, including special classes and feats, could be made by players and implemented in their servers. People who had never even thought of trying Dungeons & Dragons before played Neverwinter Nights, and not only were they hooked on the PC game, but many branched out into playing the tabletop 3.5 edition. It was the perfect creative outlet for anyone with a story to share with the world.

Everyone's got a story to tell.

Video game development is not a business that stands still. Each company is always looking to make a bigger, better game than their last - it's how these companies remain successful. So in time, BioWare stopped updating and patching the original game and its expansions; Gamespy, the multiplayer server browser where every Neverwinter Nights server could be found, was shut down in 2014.

While this may have been the end for some games, it was not to be for the then-12-year-old title. Years of server-building and modding of the game had made some unlikely software engineers out of the game's players, and the community came together to preserve the worlds they loved.

Though the player base has dwindled significantly, there are still thriving servers that persist today, with Gamespy's authentication system replaced by community-made authentication scripts. It may be over a decade old, but Neverwinter Nights has not yet breathed its last. 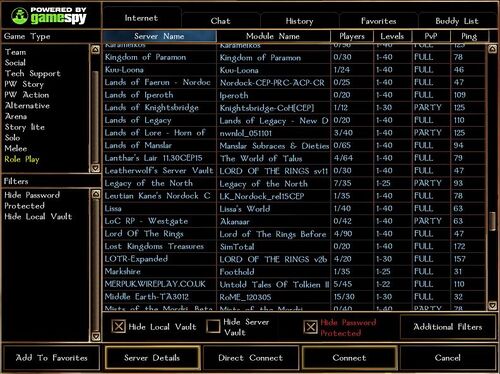 With Gamespy gone, the Neverwinter Nights community came together to make sure these servers and more didn't just vanish from the internet.

Why We Need a New Game

Technology marches on, and video-games are ever at the forefront of that march. A newer game can once more breathe new life into the role-playing game genre.

The Aurora toolset that came with the first Neverwinter Nights made content creators of the players, but newer games, while flashier than this classic, don't really give players this ability. That's a shame. The ingenuity shown by the Neverwinter Nights community is a shining example of what giving creative control to players can accomplish.

Why haven't developers stuck with this model? Simply put, there's more profit for companies in subscription-based MMOs and games that offer microtransaction systems. With games like Neverwinter Nights operating on a much smaller scale than the standard MMO (even the largest persistent Neverwinter Nights servers have a server capacity of no more than 96 players) and being completely free to play, there doesn't seem to be any profit in it beyond the initial sale of the game.

There's a way around this, however. If a new game like this were released and made free-to-play, the toolset itself could be a separate, subscription-based program with consistent updates of new tools, textures and more - allowing those passionate about persistent-world creation to drive the profits of game publishers while still supporting a growing community of tabletop-to-PC roleplayers.

Tabletop RPGs are growing popular again, especially thanks to D&D 5th edition - and game developers should take advantage of this.

Not only would BioWare (or any developer willing to take up such a project) already have a devoted fan-base if they created this new game, they would attract all-new players as well. With the recent release of Dungeons & Dragons 5th edition rules, the tabletop franchise is experiencing a resurgence in popularity - and this could very well translate into new players for a game that operates with 5th edition's rule system.

Some might argue that this game is already in production; Sword Coast Legends is slated to release in the third quarter of this year. While SCL game does harken back to the glory days of Neverwinter Nights, and is certainly a step in the right direction, its limitations (primarily that it is only for small campaigns of 1-4 players) mean that it simply cannot replace the unique experience that Neverwinter Nights offers its fans. While more developed features may be added into Sword Coast Legends, in its current state, it's just not the game that many tabletop fans are going to want it to be.

If that game is ever made, it won't be quite like Neverwinter Nights or its sequel; the completely-free-to-play model just wouldn't work for developers and publishers today. Done well, though, it could make a subscription to a toolset worthwhile, and revitalize the online RPG community again without a massive MMO.