[Interview] "The Deer God" Reincarnation and the Beauty of Nature

What if you are reincarnated as the thing you once hunted?
by Angelina Bonilla

Life is a fragile thing. The amount of time we as humans spend on this planet feels like an instant... an instant spent wishing we had more time and wondering what happens after our inevitable demise.

The Kickstarter game, The Deer God is a game that allows you to explore one of the most popular after death theories: reincarnation.

You are a Hunter who has died and been reincarnated as the very thing he once killed.

Start off as a helpless fawn only to grow into a powerful stag. There will be many dangers, but while nature is a harsh mistress she can share her beauty with us as well. The Deer God shows the ups and downs of being a creature of the wild, while displaying the magnificence of nature in a pixelated setting. Instilling emotions of wonder into their imaginations. Giving the player the chance to really become part of nature and take a moment to appreciate all it has to offer.

Game Skinny recently interviewed the creator of The Deer God, Josh Presseisen, from Crescent Moon Games, and had the opportunity to learn more about this fascinating new game.

What inspired you to make The Deer God?

Josh Presseisen: I wanted to do two things. One was to try making a game where pixel art could become 3d - with a lot of depth, lighting, and parallax. I think what came out of that idea works very well. The second idea was to use the elements of reincarnation and karma in a game. Whether that will work or not, remains to be seen. I guess we will find out how well it works when we get the feedback of players.

Josh Presseisen: Gameplay in a basic sense, consists of platforming and surviving. You are essentially on a search to figure out how to become a human again, but at the same time survive the wilderness. There are also secrets to uncover and puzzles to solve.

The story of The Deer God is based around a hunter coming back to life as a deer. Is there any other goals for the deer as he gets older other than surviving fawnhood?

Josh Presseisen: There's more to it than just surviving, but that is the basic idea. You were a human, and you'd like to be human again - you are on a search to figure out how to make that happen.

During this search, you will find out much more about how nature works.

Josh Presseisen: Despite being constantly on the computer and my cell phone, I'd say that I do have a very deep connection with nature.  Any chance I get - I like to go for walks or bike rides, or go hiking. These times are few and far between because I have a large family to take care of.

There is a special connection that I feel when I'm in the woods, I felt it when I was much younger exploring in the forest behind my house. It’ a strange feeling, but it's heart warming at the same time. 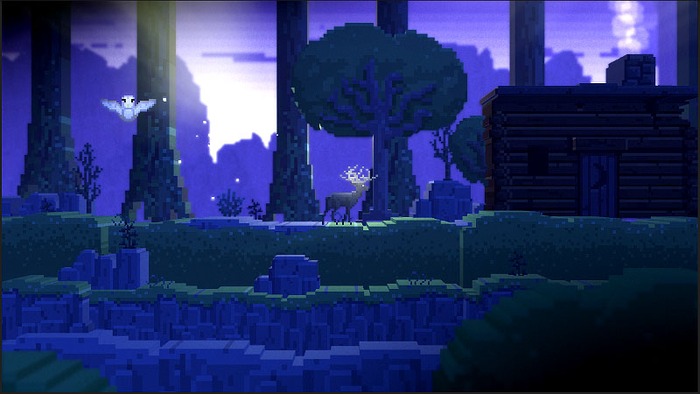 The world of The Deer God is large, or large from the perception of the Deer. How expansive is the world you are exploring?

Josh Presseisen: It’s procedurally generated, with different biomes. It will be in a sense, huge. I'm not sure if it will truly be endless, that depends on our technical limitations. I'll be interested to see how long people can survive in the world of the Deer God.

How do you level up your deer character in the game?

Josh Presseisen: You start off as a fawn, and grow up to a full sized deer after eating (think Super Mario) and there are all sorts of skills and powers that you learn that have different levels.

This deer is obviously not a normal deer, especially not with Fire Shields and Ice Bombs, where did inspiration for these particular powerups come from and how do they affect you in game?

Josh Presseisen: These powers are given to you by the ancient deer statues that you will find in the game.These are useful to you for dispatching enemies, or solving environmental puzzles. Some of these are destructive powers that are only begotten by dark karma (this is when you act evil in the game, basically) 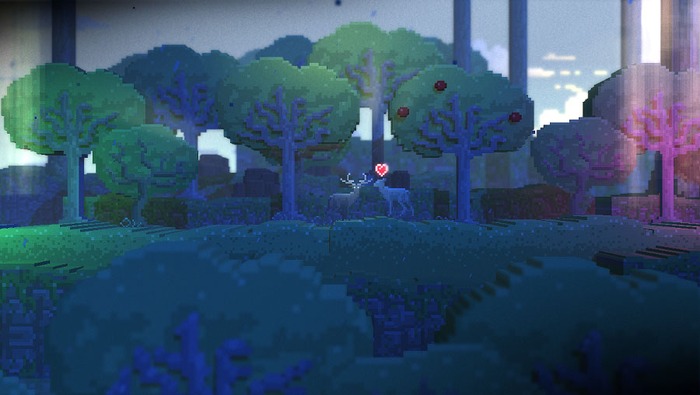 The lives system in The Deer God is very creative with all of the baby deer running around acting as your vessels for eventual reincarnation. Is it possible for these deer to grow up on their own without any connection to their father deer?

Josh Presseisen: Yes, this is certainly possible. The longer you last, your baby could grow up into a full sized deer by the time you die in the game. You will be guarding these young deer, otherwise they get

If you had to be reincarnated as one animal what would it be?

Josh Presseisen: Probably a bird of some kind - a falcon or an osprey. To experience flight I think would be amazing - that's a totally different way of looking at our world.

The Deer God is a game that allows the players to become part of nature.

Every creature they see has its role in the world around them and they get to witness it all first hand.  It isn’t just about the player becoming an adult deer it’s about the player realizing that they are part of this grand scheme of life in their pixelated world. They are masters of their own deer destinies and it’s something truly worth supporting in order to experience it.

Thank you, Josh Presseisen, for taking time to answer the questions about this pixelated piece of art. For more information on The Deer God check out the Kickstarter and take a look at this digital journey into life after death.