A long time ago, in a galaxy far far away, Lucas Arts had the chance to really go nuts with the Star Wars universe.
by Elijah Beahm

We live in an age of reboots and re-imaginings. From total reboots like 2013's Tomb Raider to soft reboots like Assassin's Creed: Unity, we're seeing a lot of new trends in old ideas. While some games seem fine as they were, a few could benefit from a tune up. Today, let's reboot a franchise that could have been amazing... if it were not for so many missteps: Star Wars: The Force Unleashed

Remember this image above? It looked amazing, and crazy. It hinted to a new take on using the Force that we never saw before. What did we get instead? Two okay-ish brawling platformers that didn't really unleash the Force, inasmuch as add a bunch of new melodrama between the two trilogies. Don't get me wrong, there was fun to be had, but the series never really hit the right tone. Whether it's crazy or grounded, The Force Unleashed could be so much more. 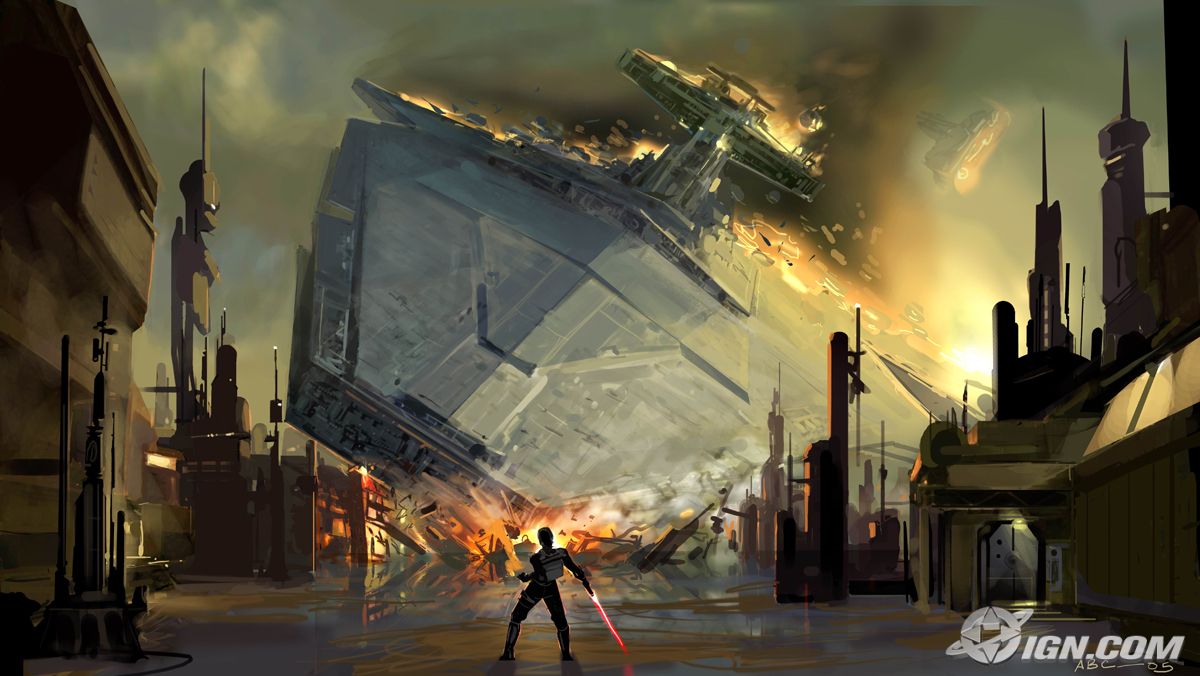 First off, let's just not make this canon. No more shying away from real good guys and bad guys dying and/or being involved with the plot. With anyone on par with Starkiller's power in the mix, there is no way you can believably explain them not just winning the day for either the Sith or Jedi. If you can tear down a Star Destroyer with your fist, you do not chicken out before Emperor Palpatine. You grab him with Force Grip, and send him straight into the Death Star's laser beam as it fires off a shot. After having a massive duel tearing apart the entire Death Star throne room.

Let's include a "defeat as many Ewoks/Gungans as possible" mini-game!

The Force Unleashed should be a crazy, messy, silly expression of Star Wars fandom. The plot should be full of winks and nods to the audience. Not done in a Scary Movie "hey look, we just... made a reference!" kind of way. No, if anything, the Force Unleashed should be more akin to a Star Wars It's A Mad, Mad World. A perfectly calm starting point, an utterly insane climax on par with the likes of Bayonetta and Azura's Wrath.

This is a game where insane set pieces actually make sense as a primary focus. When we fight Darth Vader, the game shows us just how powerful he and the protagonist are, tearing apart an entire battlefield as they duel each other. If you come across Han Solo, then have a section where you combine your Force powers with your gunnery skills and go Star Fox 64 against the Imperial Navy. What about the Death Star? Let's make it the final boss!

Yes, it may upset some fans that it is so absurd, but it can't hurt worse than this:

It's as if millions of voices cried out in pain... and could never be silenced.

Gameplay can still include brawling, but far be it from that being the only element. If Nier can combine shoot'em ups, brawling, platforming and RPG gameplay, then so can The Force Unleashed. The campaign will have to be linear, but that's perfectly fine for the type of game we're talking about here.

By the end of the game, if we are not reaching Bayonetta levels of epic, then the game is a failure. This is not some brand new franchise, but just one stand alone, fantastic lark. This is a big, silly, self-aware heartfelt laugh at all the things silly in Star Wars. I think by this point, the Star Wars franchise is due this. 2. Tone It Down. Tighten It Up. Get Serious.

One of the biggest problems with The Force Unleashed was that it was conceived back when Lucas Arts could hardly consistently put games out of even mediocre quality. As a result, the original release is a hodge-podge of wacky and serious. If we aren't going the "insane epic-ness" route, then we need to take a direct paradigm shift. Also, we are still staying non-canon because good golly that just saves us so much hassle.

The plot sets things up perfectly. It's the height of the Empire's reign. You are Darth Vader's secret apprentice. He needs you to overthrow the Emperor, but you are still a young apprentice at this point. This is where we start. In the original game's backstory, we hear about how Starkiller took out Vader's rivals and other non-Jedi targets. Let's explore that.

What if we don't fight Jedi until later on in the game? What if before then, we're just a confused young (perhaps customizable) Sith wannabe trying to make sense of a world we hardly have a handle on. You don't start out "Unleashed" to begin with, but instead develop as a Sith, and we explore what that means. 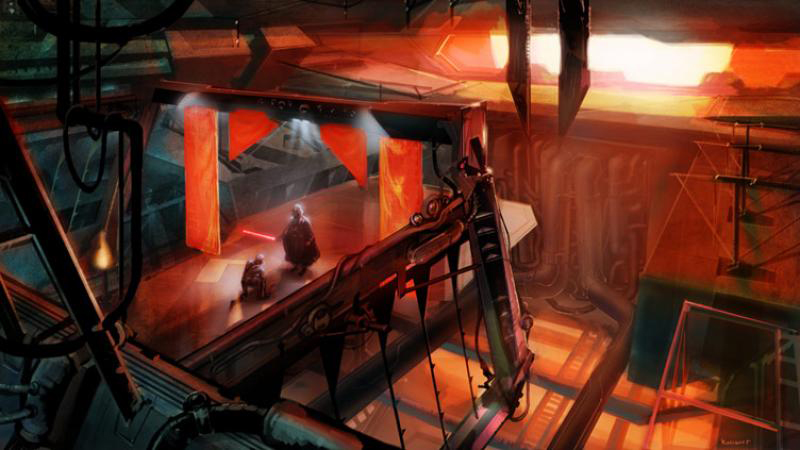 We never actually go out of our way to say the protagonist is a Jedi or ever will become one. You see, the Sith philosophy is actually a lot more ambiguous than the movies let on. There are good, evil, and morally gray Sith and Jedi. So instead of choosing between being the devil or Jesus, you're choosing between being a self-centered jerk, or being a more passionate version of Qui-Gon Jin. it offers a more realistic form of morality and offers more interesting choices than just "good or evil?" All the meanwhile, since we're dealing with rivals and all sorts of machinations are under way, we can have conspiracies and political schemes going on. The Empire turns into Westeros, and a rebellion is the least of people's worries. On top of that, you can make moral choices that impact every world you make your way through. We can even do it Wing Commander style, that sometimes your actions could actually slow down or speed up other events in the game.

There should still be a mid-game twist of fate, but it should not be as simple as the original game had it. Yes, you get discovered, but how you react to it defines your path there on out. By this point, you could have fought maybe one or two Jedi. You've beaten almost every weapon the Empire can throw at you. So you can choose to fight Vader and become the new right hand of the Emperor, or reject all that you've known and flee in your ship.

Time then begins to fast forward between levels. Now we can start finding and/or killing several Jedi. If you choose the more heroic path, then you search out Jedi and Sith that can teach you everything Vader can't. You learn new powers from them, and truly become the most powerful Force wielder. Flip side if you side with the Emperor, you still grow in power, but under his tutelage, and you kill all the Jedi you find.

These could be both new characters like General Kota and Mariss Brood, and long-standing Jedi such as Obi-Wan Kenobi. You'll also see the galaxy shift in response to your choices in impactful ways due to the time jumps. It all then culminates around the Empire Strikes Back. You have mastered the Force greater than anyone else, and whether you stand with the Empire or this newly risen Rebellion, you will be fighting a powerful Skywalker (Luke or Vader) in the final boss fight. It's here that everything pays off, like in the Mass Effect 2 suicide mission. Do your choices lead you to victory or do they make it so that even if you win, it's only a Pyrrhic victory? Also like Mass Effect 2, the game still ends even if you do lose. This could either be a hopeful or disastrous state for the galaxy, depending on what side you pick. Maybe young Luke Skywalker defeats you and becomes a true Jedi. Or perhaps your old master is more than a match for you, and strikes you down in vengeance for betraying him. 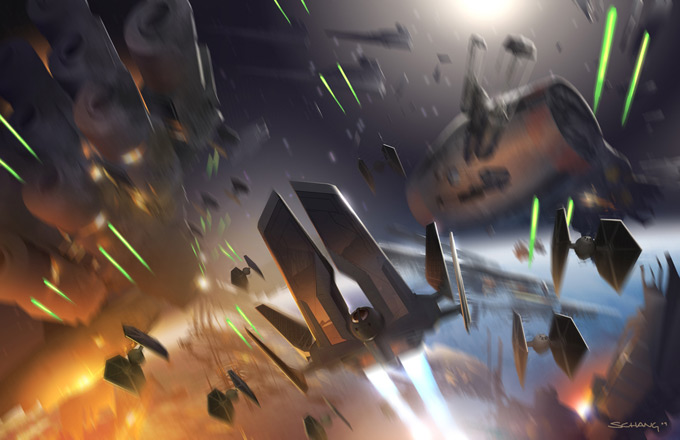 Once again, the gameplay doesn't need changed all that much. The brawling could expand in scale somewhat over time, much like Heavenly Sword. Environments would all have their own quirks and unique elements instead of just copy-pasted enemy types with new skins. Progression would be much deeper than before, akin to The Witcher 2. Some flight sequences couldn't hurt in this version either, although perhaps a mix between Rogue Squadron and X-Wing: Alliance this time.

Like the idea of a Star Wars universe gone crazy? Or do you prefer Westeros Wars? Please be sure to share your thoughts in the comments, and let me know what games you'd like to see get a reboot in the future!