Hands-On: Feeling the Burn With the Indie Roguelike Card Game Deck of Ashes

Some people may write off Deck of Ashes as a quick cash grab, but as it turns out, it's got some tricks all its own. This new roguelike card game just hit Steam Early Access.
by Thomas Wilde

I described Deck of Ashes to a friend of mine the other day as “Slay the Spire if it was Russian and jankier.”

Usually, I hate doing that — it does most things a disservice if you talk about them strictly in terms of what they resemble, since it sounds like you're warming up for a dismissal — but here, it’s difficult not to.

Deck of Ashes is very much playing in Slay the Spire’s basic genre pool: it’s a dark fantasy game set after an unthinkable disaster. The characters travel through a blighted land to set things right. The maps are random, even simple monsters can be tricky, and everything’s represented by playing cards.

In the world of Deck of Ashes, a group of adventurers, the Outcasts, destroyed an artifact during a fight among themselves. The result is the Ash Curse, which has swept the world with a magical storm of drifting cinders. Humans go mad or get possessed, animals mutate, new monsters appear, and the land itself becomes twisted.

One of the adventurers is subsequently approached by a man who calls himself the Ash Master, and they are fast-talked into going on an expedition to end the Ash Curse. Naturally, this means going straight to the last places you’d ever want to be, fighting demons, undead, and possessed humans.

At the start of a level in Deck of Ashes, you’re set down at the center of a map and sent out to gather resources. You only have so much time before the local map’s central antagonist finds you, which is represented by a set number of moves leading to an unavoidable boss fight.

In the meantime, you collect gold, Ash, and other items to buy upgrades, create new cards, and bribe the Ash Master’s fellow vendors for healing, recipes, and deck construction. The map is full of combat encounters, treasure chests, random events, and nodes that can be mined, none of which is predictable.

What separates Deck of Ashes from a lot of the similar card-game roguelikes out there is that most of your cards are expended on use. Playing a typical card burns it and places it in the Deck of Ashes, where it’ll stay until you somehow get it back.

You can get the Ash Master to bring your whole deck back at once every 24 moves. If you get to a point where there aren’t enough cards left in your primary deck to draw a full hand at the start of a turn, you automatically receive a zero-cost card, Ash Pact, which lets you sacrifice health to bring back six random cards.

However, as you go, you also collect cards that only have an effect if they’re in the Deck of Ashes, typically some kind of passive buff, as well as Renew effects that can recover a random burned card.

After a fight, you get a handful of Rest Points that let you bring spent cards back, but the same points also let you restore health, so it’s a careful balancing act. You can try to arrange it so you get an Ash Pact on your last turn, exchanging health for random cards, but that runs the risk of bringing back cards that only work if they’re Ash.

On top of that, a typical combat encounter usually has some kind of gimmick. At the start of a turn, you’re given 5 Mana to spend on six cards. It's typical stuff — spend Mana to deal damage, etc. — but even early in the game, you run into monsters that have some passive ability or interesting rotation that force you to change up your plan.

One enemy lowers your Mana pool for a turn, then hits you with an effect that does damage based on how much Mana you were able to spend; another shoves unusable or detrimental Ailment cards into your deck if anything else dies while it’s on the field, which stick around after combat like a cigarette in your drink.

There’s also an interesting flow to the game as it stands right now. With something like Slay the Spire, the game is built mostly around decision-making. You’re trying to get a deck built in Act One based on what it hands you, then reinforce that archetype as you go until it’s hopefully equal to the challenges in Acts Two and Three. 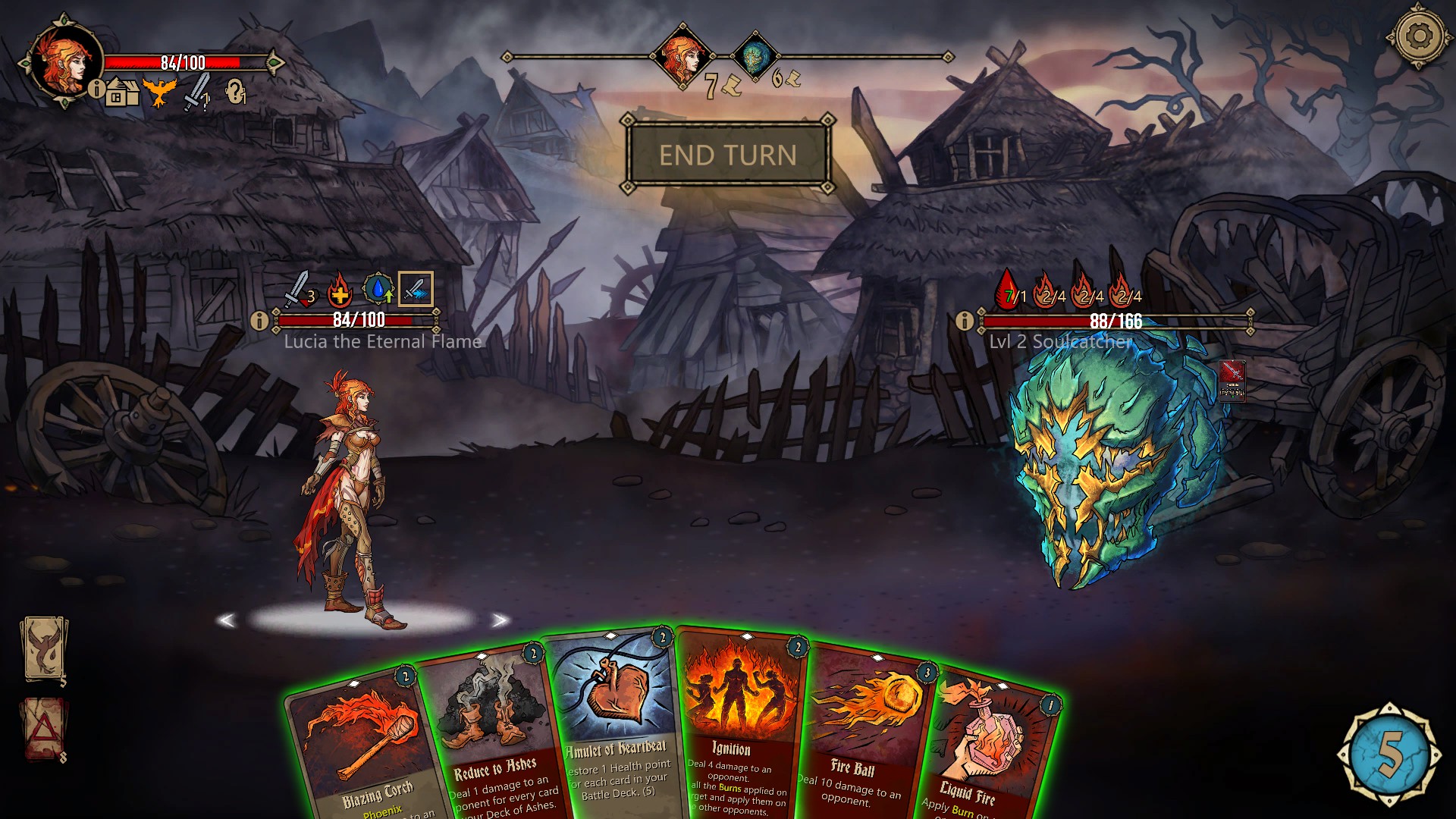 In Deck of Ashes, there’s a similar challenge at work. Right now, the only character I’ve been able to unlock is Lucia the Eternal Flame, a fire mage who you’d think would be all about direct nukes, but I’ve had the most success so far with a build that’s all about stacking multiple damage-over-time effects.

Maybe I build them up on a target to bust out Piercing Fire for a strong single-target nuke, or stack a bunch at once with Pure Fire, then hit Ignition to spread them to every other enemy on the field. Ideally, I do it with a particular Scroll card in my Deck of Ashes, so I regenerate slightly for every burn effect that’s active at once, which turns Lucia from the “squishy wizard” archetype to a pyromaniacal Wolverine. The more stuff is on fire at once, the harder I heal.

However, that build was more or less done by the end of the first level. Since then, I haven’t found much I’d want to take that would complement it. Most of the extra recipes I’ve taken have been for quality-of-life increases, like Healing Balm (four turns of regeneration) or Scroll of Resurrection (25% chance when one card’s burned, another one reenters play).

The deck is pretty much built, and now the challenge — assuming I don’t wade into a fight with no good cards like an idiot — is coming almost entirely from weird and sadistic enemy builds.

There’s one monster in the third level that’s got me stuck right now. It's all about throwing junk cards into my deck via Ailments, then leaving me with a deck that’s just "full enough of crap I can’t get rid of" that my active cards never drop low enough to trigger an Ash Pact. Either I kill this thing in eight turns or so, or I’m not going to kill it at all.

Other enemies simply rock up to the plate and hit me with a single big nuke every turn, or play weird games where their attacks hit harder based on how much Mana I’ve got left — then raise my Mana pool on my next turn, which means it might not be possible to spend all of it.

Another one, the Cannibal, looks frightening until you notice that all his big hits are going straight at the other enemies he’s with because if he scores a kill, he instantly summons a second Cannibal. There’s some admirably twisted encounter design at work here, and I have to salute it even as I hate it.

There are a few incidental bits of weirdness scattered throughout Deck of Ashes, of course, as you might expect from any Early Access game.

The upgrade systems from your camp screen require you to gather hard-to-find items to purchase bonuses that really ought to be free, like getting the Herbalist to remove Ailments from your deck. There are a lot of cards that don’t appear to have any actual use, or which might be great in a theoretical endgame but appear too early to be worth taking.

Also, dying in this game sucks. If you buy a Resurrection Rite and then die, you respawn with half your resources and none of your accumulated recipes, which effectively means you’ll want to start over anyway.

Deck of Ashes plays more slowly than other card games do, so maybe the Rite’s worth it once you’ve gotten into the later levels just so you don’t have to repeat a couple of hours of gameplay, but the death penalty still seems remarkably overtuned.

It’s also got a few of the usual problems you get with a beta. The cutscenes stutter a lot, the animation is so weird and minimal that I wonder if it’s a deliberate artistic choice, and the dialogue rarely matches the subtitles. Deck of Ashes is playable and stable, but it’s still rough around the edges.

There’s a real game here, though, with some smart thinking behind it, and it's in with a chance. I’d be really surprised to find out that the elevator pitch for Deck of Ashes didn’t involve Slay the Spire in some way, but by focusing on your cards’ constant burn cycle, it manages to differentiate itself almost immediately.

This is one to watch as it moves through Early Access, especially if you’re looking for a new card game with which to use up all your free time.