E3 2013 finished out the live stage shows with the reveal of Transistor, a futuristic action RPG that follows Red. It looks like Supergiant Games has hit the mark yet again!
by ErinV

Supergiant Games had their first E3 appearance today with the demo of their new game Transistor.

The protagonist of the game is a red-head named Red. Not the most creative name, but the developers make up for that in other arenas. Red is a "star" who finds herself transported across town (ballgown and all) after she is attacked by five assassins. Even worse, the singer has lost her voice.

The scene is Cloudbank, a futuristic star-studded metropolis where the "most influential voices" are disappearing.  Red has been targeted. When she is transported away from her attackers, she finds herself on a roof top near a mysterious weapon lodged in a man's body. The weapon of unknown powers begins to speak to her in the voice of the man, assuring her that he is safe inside the weapon and that it is now up to her to keep it from her assailants. The weapon is described as "the one and only transistor" and looks like a futuristic version of Soul Calibur. 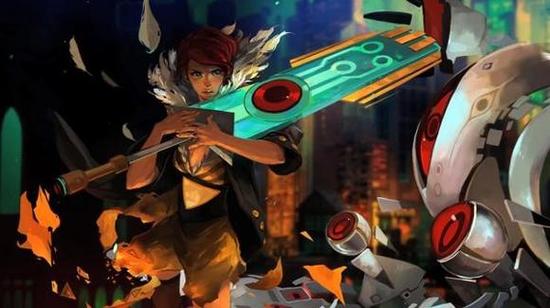 Transistor is your basic action RPG.

Supergiant Games wants to make it easy for you to just pick up their games and get right into the meat of things. The game has your basic mechanics. While being relatively easy to jump into, it does have some aspects that keep gameplay interesting.

The Process are monsters that split off into cells after you attack them. The transistor requires that you collect these cells so it can absorb them. If you don't, they morph and begin to attack you. In other words, you can't just lay waste to these things and run off.

So what sets apart Transistor from other action RPGs?

Most notably, the ability referred to as Turn. Basically, at any point during the game you can stop the entire world and plan out your next move. Brilliant. 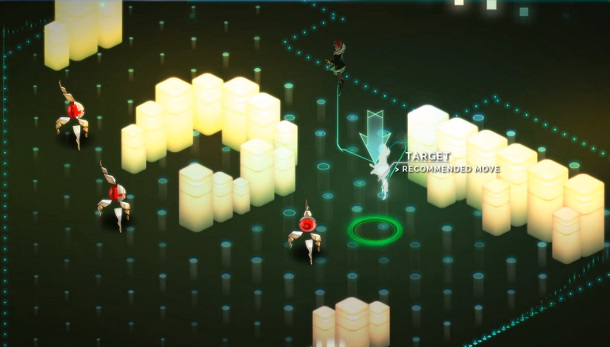 This adds an element of drama to the action and breaks up the battle so you aren't just rapidly hacking away at whatever is attacking you. This ability is a huge asset when you find yourself surrounded by enemies that would simply overwhelm Red in your average game.

Transistor gives you the opportunity for more strategic play in situations where blind hacking and sheer luck typically take the forefront. The best part of turn is that you have unlimited time in that mode. There isn't a timer screaming at you to finish planning before you end up rushed by swarms of monsters or assassins. You can also create a plan and then overwrite it. If you don't like what you decided, you can choose to change tactics.

The artistry of Transistor is a beautiful representation of Supergiant Games's style.

If you've seen Bastion, then you already know that Supergiant Games has an incredible artist on staff. While the games they release may not be as realistic as Watch Dogs, there is no doubt that these games are artistic gems. The color selection and clear stylistic choices make it feel as if you have jumped into a painting and it has come alive around you. And to top it all off, the musical score is just plain scrumptious.

According to the website, Transistor is expected to come out early 2014. Previous to E3, the company had also failed to release which platforms it would be available on. Luckily, they announced during the conference that the game will be making its debut on PS4 and PC on Steam. This is certainly a game to keep your eye on!

Let me know what you think below! How was the final demo for the E3 live Stage 1 show? Will you be looking for Transistor in 2014?