Getting classic point & click games to run on modern PCs is actually easier than solving the game's puzzles. Join me as I present ten classic you can play today, on your modern PC.
by Geir Haugland

Point & click adventure games have regained some of their relevance in recent years. Telltale's surprise hit The Walking Dead won game of the year at Spike's Video Game Awards in 2012, and there are indies developing some incredible examples of the genre. If you have pixel hunted your way through indie darlings like Machinarium and had your very soul shattered at its core by Telltale, why not take a step back, and experience some classic point & click adventure games?

I hear you saying, "I can't be bothered to pay a premium on eBay for a copy of a game I am unsure I can get working.” Thankfully, there won't be a need for that, as all the games presented in this list are readily available on digital platforms like Steam and Good Old Games. GOG, in particular, is an old-school PC gamer's best friend as their entire catalog is ready to play on modern PCs. And if the deal still needs sweetening: they are dirt cheap. Join me, and let us delve into adventure gaming's past to unearth some gems.

Sam & Max: Hit The Road is a fully voiced effort by Lucas Arts, based on the comic book characters created by Sam Purcell. You can expect Sam & Max to tickle your funny bone. Sam is a cool, calm, and collected investigator who just happens to be a dog. Whereas Max is a hyperactive rabbit “thingy” (to quote the game), who relishes chaos, violence, and mischief. This admittedly, odd-couple decided to enter the lucrative freelance police business.

The game starts with the duo receiving a phone call from the commissioner alerting them to the escape, and potential kidnapping, at the local circus. The circus' star attraction has disappeared together with a giraffe-necked girl. In our investigation, we point and click our way through beautiful pre-rendered backdrops. This classic adventure game is an excellent choice for gamers who enjoy thinking outside of the box, and appreciate a comical premise.

9. Indiana Jones: and the Fate of Atlantis

LucasArts' Indiana Jones: and the Fate of Atlantis is notable for providing the player with the choice of three different playstyles. Those of us who can work well with others could choose the team path, where the alluring Sophia joins us. We could go for the wits path if we have faith in our puzzle solving prowess. Or we could choose the fist path if we prefer to punch Nazis first and think later. This innovative system provides replay value to the game; as the various paths present us with different puzzles to solve, and slightly alters the story.

In the game, Indiana Jones is once again tasked with thwarting the nefarious schemes of Nazis. Set in 1939 on the cusp of war, Indy travels the world to track down Klaus Kerner, and the horned artifact he stole. Fun fact: if you have the Wii version of Indiana Jones and the Staff of Kings, you can unlock a fully playable version of The Fate of Atlantis. This game is a perfect fit for adventure gamers that desire a serious tone, and for fans of the Indiana Jones franchise.

Together, Al Lowe and Sierra created some of the genre's most revered games. Torin's Passage is not one of those, but it possess a unique charm and represents something completely different from Al Lowe. He has stated that he wanted to create a game geared towards a younger demographic after watching the Robin Williams classic Mrs. Doubtfire with his daughter. He wanted to create a game that parents could play together with their kids, something of a departure from his previous work on the Leisure Suit Larry series.

Torin is a simple farm-boy enjoying a quiet life that is abruptly interrupted when an evil witch uses black magic to capture his parents. It is our job to assist Torin in his rescue mission, and together we travel to the world below through portals on the surface. On our journey, we become acquainted with a vast array of interesting characters. Torin's Passage is a charming point & click adventure game, that serves as an excellent starting point for future adventure game aficionados.

In the times before graphic point & click games, there existed text adventures. One man who successfully transitioned from text- to graphic adventure games was Brian Moriarty. In 1990, LucasArts published Loom, a high-fantasy epic possessing a more serious tone than the company's other more light-hearted games. Today, Loom is perhaps best known for the incredibly funny sales pitch included in The Secret of Monkey Island (Ask me about Loom!).

Which is a shame, since Loom is such an interesting game on its own. The original version of the game came with a thirty-minute audio drama on a cassette. The game features an involved and complicated narrative, filled with magic, betrayal, and silly names like Bobbin. Loom was a truly ambitious effort that perhaps didn't live up to expectations on release. Nevertheless, it remains a piece of adventure gaming history that is well worth your time if you are craving a serious storyline. Let's be completely honest for a second, we've all rooted for the bad guy at one time or another. Apparently, Westwood Studios rooted for their antagonist, turning their final installment of the Kyrandia trilogy into a villain simulator where we assume control of Malcolm - who just happens to be your run-of-the-mill deranged jester. The clever inclusion of the moodometer mechanic facilitates interesting puzzle solving, where in some situations honesty is the best policy - whereas in others liars prosper.

Malcolm's Revenge is a retelling of the first Kyrandia game told from Malcolm's perspective. In the original, he was accused of murdering then protagonist Brandon's parents. I feel obligated to point out that the title of the game is misleading, as Malcolm's primary goal seems to be redemption. Today, Westwood are perhaps better known for creating the excellent real-time strategy series Command & Conquer, and being unceremoniously shut down by EA. Malcolm's Revenge is a good choice for gamers who desire a humorous experience, and who are willing to overlook the clunky interface.

The premise of the Larry games are as simple as they are ingenious: hook up with women. Following a successful Kickstarter campaign in 2013, N-Fusion Interactive, Intermarum and Replay Games, in collaboration with series' creator Al Lowe, released an enhanced version of the Sierra classic. Reloaded feature updated graphics and some minor gameplay tweaks. Al Lowe's masterpiece from the 80s dares us to keep a straight face as we're aiding Larry's quest for booty. Leisure Suit Larry's puzzles are expertly rooted in the narrative; Larry needs wine and condoms for his night out wooing damsels. Larry needs to convince said damsel to partake in some boogie on the dance floor.

We do this because Larry badly needs to get laid. Being a 40-year old virgin two decades before Steve Carell, he is, understandably, desperate. Leisure Suit Larry: Reloaded is the perfect choice for point & click gamers looking for a hilarious game with familiar themes. Guys have been Larry, and girls have been subjected to a Larry.

In 1998, Dreamforge Intertainment released Sanitarium. A disturbing point & click adventure game partially set in an asylum, and partially in a warped world beyond our reality. In Sanitarium, we are maneuvering through strange and eerie locations; questioning what is real. The protagonist is suffering from amnesia, and the object of the game is piecing together his memory. Sanitarium is wonderful in its presentation, disturbing in its content, and an absolute joy to play. Featuring a twisted narrative that is a demented pleasure to uncover, Sanitarium is likely to stick with you.

Released at the tail-end of point & click adventure games' popularity in the late 90s, Sanitarium saw little commercial success. It garnered some positive criticism and subsequently became a cult classic. Fans of psychological horror games will appreciate Sanitarium. The visual depictions of insanity are a work of art. A note caution, Sanitarium is not for the timid.

3.  I Have No Mouth and I Must Scream

Harlan Ellison is an interesting figure. In 1967, he published the short story "I Have No Mouth and I Must Scream". It chronicles the lives of the last survivors after an advanced artificial intelligence deemed human life unworthy and consequently wiped the entire human race out. For the remainder of the story, the A.I. tortures the remaining survivors. 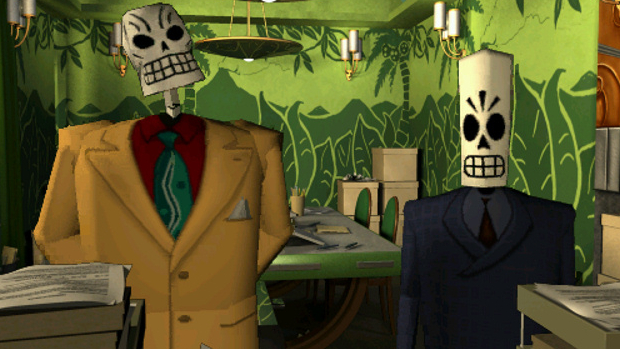 Grim Fandango is legendary game designer Tim Schafer's magnum opus. In Grim Fandango, we assume the role of Manny Calavera, who works as a travel agent in the afterlife. Manny is working off his debt by guiding his clients to their final destination, and the better the person you've been, the better your travel accommodations will be. Grim Fandango's story takes place over four consecutive November 2nds and chronicles different stages of Manny's un-life.

Grim Fandango has been a holy grail among PC collectors and getting the game to run on modern PCs is a daunting task. There are several hacked installers released online to get it running adequately on modern computers. Therefore, the announcement of a remastered version was a welcoming surprise. Everyone should experience this classic, as it is universally praised for a reason. 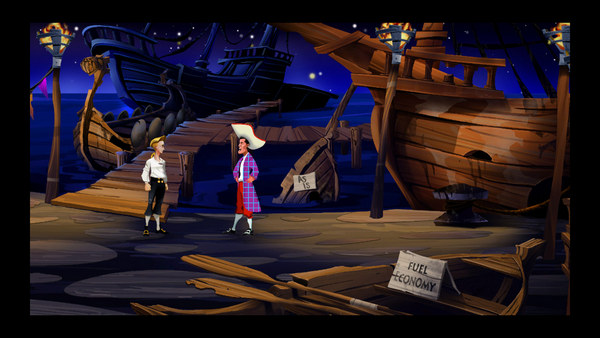 Being the brainchild of Ron Gilbert and Dave Grossman, with design help by Tim Schafer, the Monkey Island games just had to be good. Released in 1990 and 1991 respectively, the first two installments in the Monkey Island series are some of the best adventure games ever created. They star Guybrush Threepwood - mighty pirate! Monkey Island is known for its wacky characters, charm, comedic storylines, and satisfying puzzles. Who can forget the blind look-out of Melee Island? Or Stan, the used coffin salesman in Monkey Island 2 you nail inside one of his coffins?

What do you think? Did I leave out any great point and click adventure classics? Let me know in the comments below.

Editor-in-Chief of The Swamp Ascension Corporation. Video game enthusiast, collector, and friendly with felines. Fan of indie development, and Triple-A games, but undecided about snakes.