The Folks Behind Cards Against Humanity, a Party Game for Awful People, Answer Questions

The guys behind Cards Against Humanity talk about dirty jokes, Dickwolves, and how they sleep at night.
by Amanda Wallace

Several of the people behind Cards Against Humanity sat down and answered questions about their hilariously addictive, incredibly inappropriate game. CAH is billed as a party game for horrible people, and a game "you shouldn't play with your parents."

They discussed these questions in the form of a Reddit AMA, which you can read the total transcript of here. This is just a brief look at some of the answers from the people behind CAH, Maxistentialist, bhantoot, ehalpern and trinCAH.

Recently you guys wrote a blog post about how you were unhappy with the Penny Arcade folks over their Dickwolvse comic and the aftermath of how they handled the criticism of the comic. Given the nature of the game you created and some fo the dark humour you have on some of the cards (Date Rape, Beating Your Wives, Ethnic Cleansing), what explanation could you give to this situation that doesn't come off as hypocritical?

"I hope that my blog post speaks for itself, I don't have a lot more to say on the subject. We really like PAX and want to keep going. Our sense of humor may be dark, but as people who have been bullied ourselves, we try very hard not to bully people with our jokes. We wrote the "date rape" card when we were less mature writers, and we removed it a long time ago."

We're planning to start doing wholesale distribution to FLGS (Friendly Local Game Store) next year. It's a huge project for us and we want to do it right, without relying on a big distributor or anything like that. --bhantoot

Do you think there is anything "too soon" for a joke? Like, would you be willing to put in a "Typhoon Haiyan" card now? If there is a "too soon," then how long do you have to wait until a tragedy becomes funny?

"Eli here from Cards Against Humanity. We write our cards to be as funny as possible. If people are ready to joke about something, then a joke about it will be funny. If people are not ready to joke about it, then there is no way to write a funny joke about it. It will just make people sad or uncomfortable. Different people have different thresholds and sensitivities, but we try to figure out where the lines are so that we can toe them. We also read and respond to all emails that express offense at certain cards in the game. One of the nice things about being an independent game is that, as well as writing whatever jokes we want, we can also change or remove jokes at a moments notice." How do you sleep at night?

With one eye open"

Instead of asking about the fourth expansion, could you tell us when the FIFTH expansion will be made available?

Eli here from Cards Against Humanity. The Fifth Expansion will be available when the stars fall from the sky and rivers flow backwards, when mountains crumble and God descends from his throne in Heaven to walk among men. Sign up for email updates at our website.

There were some articles recently about the safe space you had set up at PAX, detailing your rejection of rape jokes. The game includes the ability to crack jokes about the Trail of Tears, the Three-Fifths Compromise, Coat Hanger Abortions, Auschwitz, Dead Babies and Being Marginalized. Why draw the line at rape? What makes a rape joke different than any of these?

"Obviously the core of Cards Against Humanity is finding shocking or offensive things (historical or contemporary) and trying to identify a funny or absurd angle to make fun of. The goal of our game is to make people laugh, so we have be sensitive to the line between delighting people and upsetting them. If a joke is too upsetting to too many people, it gets cut.

Personally I think the best card in the deck is "Emotions." -- bhantoot

Rape jokes almost always tip the scale to "upsetting people" instead of "delighting them." If I had to guess why, I would say that it's because about a quarter of all women have been sexually assaulted. Additionally, while nearly everyone recognizes that The Trail of Tears and Auschwitz were wrong, not everyone agrees that rape is wrong.

We're not here to tell you what kind of jokes you can or can't make. But Cards Against Humanity is our game, and rape is something we don't want to joke about."

We play it all the time! The more you play, the more the subtle cards shine and the big dumb cards can become hopelessly dumb. --bhantoot

Do you guys ever thin the deck, so to speak? I find myself wanting certain cards to never show up in my hand again after a few times through.

Ben from CAH here. We pull out the worst cards every few months.

Is /u/wil [Wil Wheaton] making an expansion for you guys?

Wil wrote this card for our PAX pack: 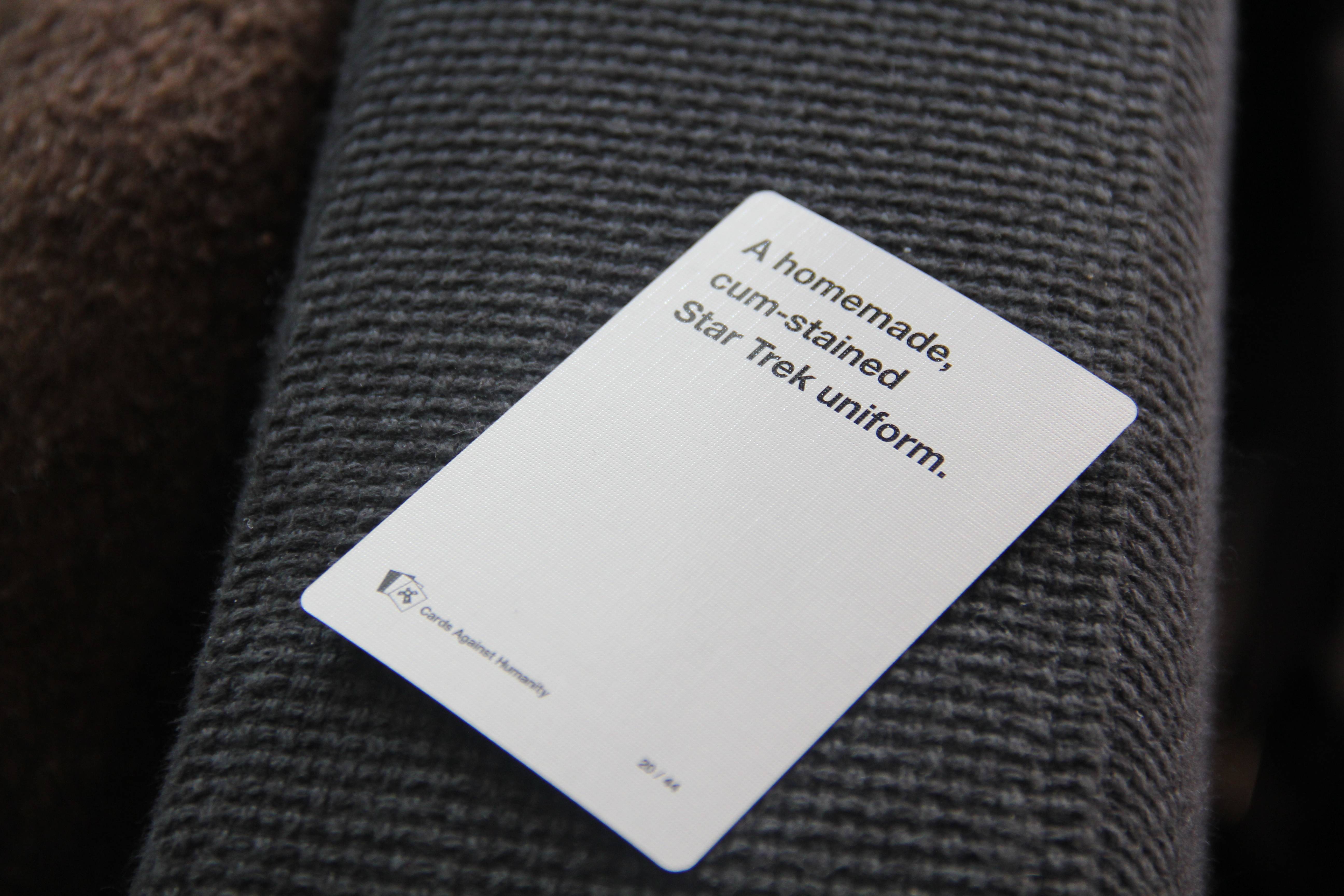 Hi Max...I remember you from ICDA debate in high school! I was floored when I realized you were behind CAH, congratulations on all your success! Your cards are alternately clever, horrible, and grotesque. Can you give us some examples of card ideas that never made it into the game? And what's your favorite ICDA memory?

Ha! I have the best memories of ICDA, though I never did very well because I always tried to be funny in my speeches. We have a huge list of cards that we've debated for hours and ultimately don't decide to put in the game, usually because they're too weird. My favorites recent rejects are:

How did you choose the design of your cards?

"Ben from CAH here. The idea was to keep the content front-and-center, not some dumb design, and we thought the look of the way-too-serious black/white Helvetica Neue saying things like "Dick fingers" was just hilarious."

To read more of the Reddit exchange, check here. To find out about the Cards Against Humanity 12 Days of Holiday Bullshit, click here.