Divinity: Original Sin; the game you never knew you needed.
by Ford James

I hear faintly in the distance, an all familiar phrase echoing from the local market in the town of Cyseal. My primary party member, a mage specializing in ice/water spells, aptly named Elsa after Disney’s Frozen (a guilty pleasure of mine) continues to dig up graves in the north of the city with humorous epitaphs on the gravestones such as ‘RIP In Peace’ and ‘Here lies Ana Matopia; whoosh, bam, splat and she was gone’.

Suddenly an evil cackle comes out of one of the graves I’m robbing and a small hunched over skeleton with a bomb bigger than its body emerges out of the ground. “Shit!” I thought to myself as I tried to figure out the best course of action to take to avoid my entire squad being blown to fantasy-esque smithereens.

The premise of Divinity: Original Sin is that youre a 'Source Hunter' commissioned to the land of Rivellon to help with a seemingly simple murder inquiry for a local official in the town of Cyseal. However, it soon becomes apparent that there is something much larger afoot. ‘Sourcery’; the cheesily-named evil magic in the land of Rivellon is evidently behind a bigger issue but without spoiling too much of the plot, expect to battle humans and monsters alike, some traditional, some a lot more unique than is commonly seen in other video games and expect to visit different lands and dimensions in order to conquer the Sourcery and save the land of Rivellon.

Divinity: Original Sin throws you in at the deep end.

There’s no guide or helpful hints for how to best utilize the character options available to you, there’s a small tutorial dungeon which teaches you the very basics of combat and the game mechanics but apart from that, you’re on your own. It’s a much needed refreshing take on video games in general, as the majority of games in this day and age are far too focused on holding your hand and escorting you through even the simplest of tasks.

An example of Divinity: Original Sin going against this increasingly frustrating trend is as soon as you reach the first city by the name of Cyseal, you hear commotion and chatter coming from the harbour. As you reach the source of the gaggle of people, it becomes apparent one of the ships in the harbour has caught on fire.

Without the game telling you, this is one of the first minor quests in the game; if you have a character with a rain spell, you’re able to put out the fire, gaining reputation and experience for your starting duo. If you don’t, you have no option but to keep walking. Even though it’s a simple and maybe to some fairly obvious solution, managing to solve it yourself is a satisfying feeling.

Larian have managed to create an incredibly immersive universe in Divinity: Original Sin.

It’s safe to say it also looks absolutely beautiful. From the bustling marketplace in Cyseal, to the torrential rain in the graveyards near the lighthouse, to the snowy plains in Hiberheim, every turn will leave you amazed and enthralled in the detail and depth to the game and world Larian have constructed alike. One of the strongest points in the game also is the humour; there are plenty of quips, jokes and references which will leave you chuckling to yourself as you prepare to incinerate a group of zombies in a fiery blaze.

At the same time however, Divinity: Original Sin has a steep learning curve in regards to the combat; if you’re fairly new to turn based combat video games, like I was, it may take you a while to get the hang of things (but trust me, the patience is worth it!). Larian crafted the environment and combat scenarios in such a way that you’re nearly always able to gain an elemental advantage as long as you make use of the surroundings; for example, a cluster of rabid dogs standing around in wet ground aren’t going to survive very long when you use an electrical spell to fry the ground beneath their feet. The same goes for orcs just coincidentally loitering around some stacked barrels of oil; a quick arrow to the barrels and a fire charge to the ground will swiftly dispense of them in a fairly warm fashion.

Sound quality and immersion is always an important feature.

And make no mistake, Divinity: Original Sin definitely doesn’t fall short in this department. Featuring a soundtrack composed by Russian/Belgian composer Kirill Pokrovsky, having previously worked on other Larian games such as Divine Divinity and Divinity: Dragon Commander. The shuffling of nearby foes you’ve yet to uncover, the shouts and cries from the harbour, the wails and screams from the creatures you exterminate; all create an immersive environment which leaves you satisfied.

The fashion in which Divinity: Original Sin came to be is an interesting tale too.

A lot of projects with seemingly infinite potential are on the crowd funding website Kickstarter, however few actually manage to receive the funding they desire and therefore few projects actually succeed. Divinity: Original Sin is one of those few however; receiving just over $1 million in pledges against their goal of $400,000, it enabled Larian Studios to create the masterpiece we’re playing today. A lot of the Kickstarter backing pledges included rewards such as naming an NPC, creating some lines of dialogue for the game etc. This meant a lot of the humour and clever dialogue in the game was created by the fans, for the fans.

Larian have genuinely created a game with infinite potential.

One of the key components in the game is the RPG Editor you receive when you purchase it; this is the exact same editor Larian used to create the entire game in their studios, which means anyone with enough time, talent and dedication can create absolutely anything they desire within the Divinity Engine.

Valve is a prime example of a company whose games have an enormous collection of User Generated Content, as their games all use the Source Engine which is very friendly for fans looking to create their own unique quests, maps and gamemodes within their games. Left 4 Dead 2, Half-Life 2 and Portal 2 are three of the most popular Valve games with a big UGC community. Another obvious example is Minecraft, where most of the long-lasting appeal for it comes from the various mods and plugins you can install, all user created.

One of the drawbacks is the seemingly prehistoric inventory management system; repeatedly having to check if your characters are overburdened with items, making sure the specific character in your party has the item you need to use (e.g. you have to use the character with the shovel in their inventory to be able to dig up graves rather than automatically passing it across). And, while the visuals and interface look nice, it could definitely be more functional in regards to filtering and sorting the items and locating the equipment you’re looking for. Divinity: Original Sin also has a fairly lackluster crafting system when compared with other cRPG’s such as Skyrim. It’s definitely something Larian can build on for the future.

Co-op in Divinity: Original Sin is also definitely worth a look at.

Co-op allows one of you to explore one avenue of one of the plentiful quests while the other explores another, effectively progressing through non-combat quests at double the speed. With combat quests however it’s always recommended to tackle them as a party of four unless you fancy a real challenge, because even without the enemies becoming tougher the more people you play with, the combat itself is far from easy, anyway.

Larian Studios have promised to continue development in regards to updates, patches and DLC for Divinity: Original Sin for ‘quite some time’, according to Larian boss Swen Vincke. He confirmed they will continue to improve the engine, add features and build on the framework in preparation for their next title. He also said it’s unlikely Larian’s next game will be crowd-funded like Divinity: Original Sin, as he believes the crowd-funding pool is limited and should only be used by those who really need it. 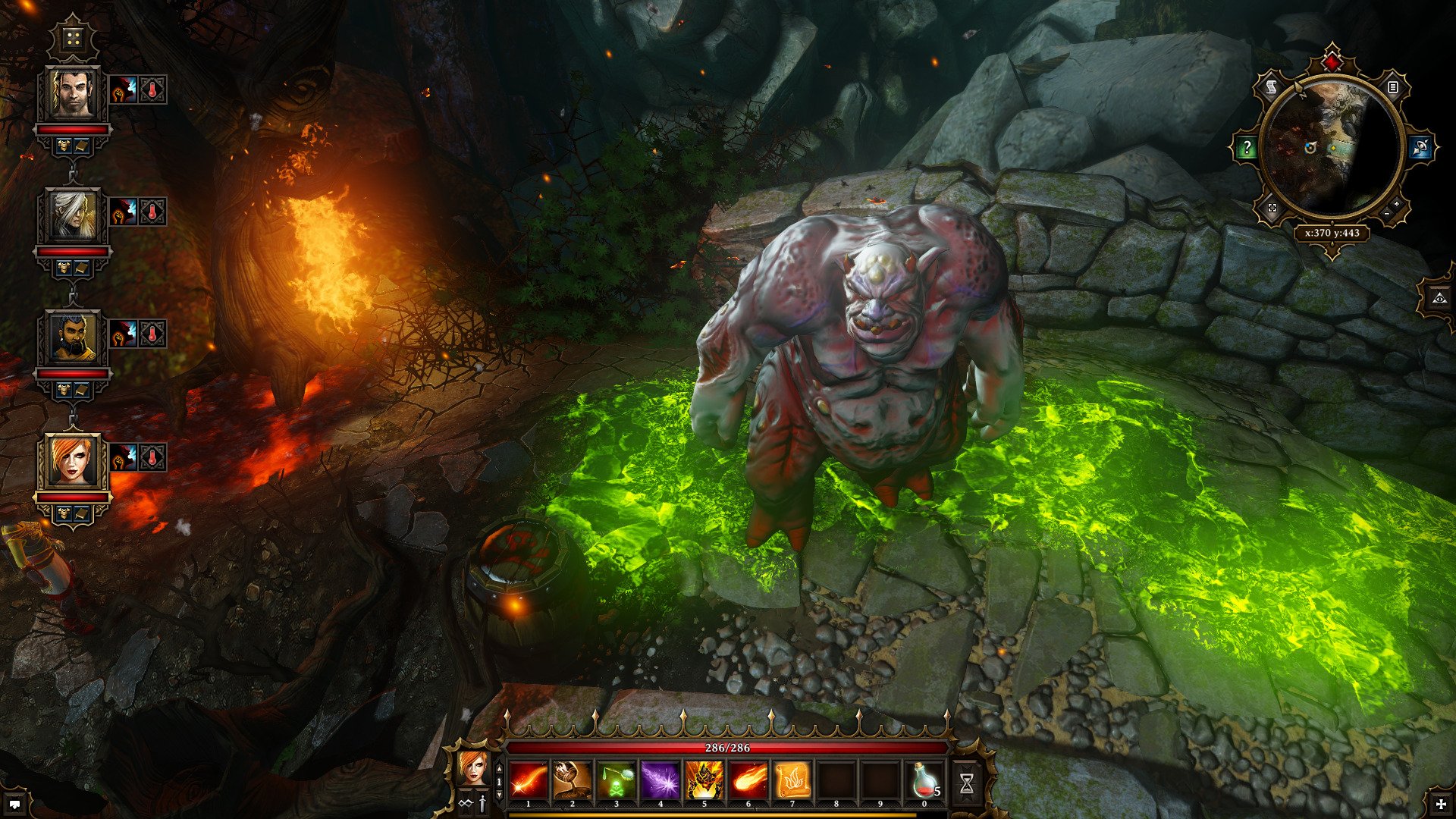 Divinity: Original Sin is one of the few and far between games which engrosses me so much I’m genuinely unable to stop playing.

Taking inspiration from the classic cRPG’s such as Planescape Torment and Baldur’s Gate and obviously the original Divinity games, Divinity: Original Sin is a very welcome addition to the currently lackluster modern isometric CRPG genre. For players young and inexperienced to older, wiser, veteran gamers, Divinity: Original Sin promises to entertain and keep you ensnared in the trap of lusting for more when you’re unable to play.

Our Rating
9
Divinity: Original Sin; the game you never knew you needed.