The Retrospective continues with Gears of War 3, do you remember what happened? Catch up and be prepared for Gears 4.
by Joseph Ocasio

After Gears of War 2, fans had to wait 3 years to finish the fight against the Locust. Gears of War 3 wasn't seen until Cliffy B showed off a trailer of Gears 3 on Late night with Jimmy Fallon in 2010. At E3 2010, a live demo was presented, highlighting a section where Marcus and the Delta Squad fight off Locus at Anvil Gate -- an early section of the campaign.

The next demo shown had Marcus, and the members of Delta Squad, battle Lambent enemies on a ship. The presentation even included walkers out of Aliens, and giant boss bigger than anything the series had seen up to that point also made an appearance. In 2011, a closed Beta was made available for people who bought the "Epic" Edition of the shooter Bulletstorm on 360. (Bulletstorm was available on PS3, though no closed beta was made available on that system for obvious reasons). Gears of War 3 finally released on September 27th, 2011.

When creating the Story, Epic hired novelist Karen Traviss to write the third chapter in this iconic series -- she also wrote the tie-in novels. Cliff Bleszinski (Cliffy B) also wanted to make the story more emotional; having a big part being the relationship between Marcus and his father Adam -- Adam Fenix only made small cameo appearances in past installments. Cliffy B and series producer, Rob Ferguson, knew what it was like losing their fathers at young ages, which made it a more personal experience for the two than in previous installments.

Epic also wanted to create a story about survival, as Humanity and the Locust were near their ends. The remaining forces of the C.O.G were scattered and few, barely having enough resources to get by. Remaining civilians were left to fend for themselves and showed more hatred towards the C.O.G than ever before -- given what happened at the end of Gears 2.

A behind the scene's look at Gears 3

The Locust were no different. From fighting their own who turned Lambent, to their major stronghold being in ruins, the old enemies were just as damaged as their human opposition. Survival was the biggest theme of Gears 3, as was closure, with many characters given a proper send off that they deserved.

Gears of War 3 opened where the series began, Marcus being let out of jail. However, instead of going to re-join the C.O.G, Players got to participate in a flashback to when Marcus first lost his dad. Players we playing through the very act that got Marcus arrested and sent to prison in the first place.

Players then learned that this was a dream and Marcus awakes on a ship with the remaining C.O.G forces, 6 months after the events of the last game. Dom has tried to use farming as a way to help cope with the loss of his wife and Anya, who was once relegated to communications, now takes up a lancer with Marcus, Dom, and new member Jace (played by Michael B Jordan). In the meantime, Cole and Baird led a second team consisting of Clay Carmine (Ben and Anthony Carmine's brother), and new character Samantha Byrne (voice by Claudia Black) to get supplies. The C.O.G were visited by former chairman, Prescott, who had abandoned the C.O.G during the 6 month period between Gears 2 and 3. Prescott had information for Marcus in the form of a message from Marcus's Father, Adam Fenix, who was alive and being kept prisoner by the Locust. 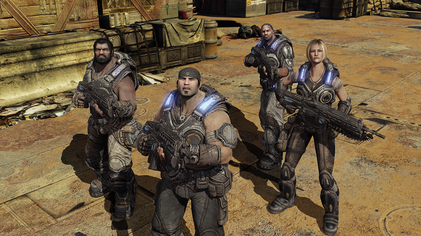 But, as they were learning this, they are attacked by the Lambent horde, who brought an enormous beast with them. In order to kill it, Cole and his squad used a crate of Tickers near the bridge to kill the beast, which ultimately exploded. Marcus and his squad survived, but much more were injured or killed. Prescott was mortally wounded, but before his death, he provides Marcus with an encrypted key with the location of a secret base known as Azura where Adam is being held. Leaving some of his Gears to help the survivors, Marcus, Cole, Dom, and Baird take off towards Anvil Gate to seek aid from Col. Hoffman.

After crossing through a Locus infested base and learning the Queen Locust was still alive, Delta Squad managed to get out with a Locust Blimp and even manage to rescue there old friend Dizzy from a nearby base. It was revealed in comics that Dizzy survived his encounter in Gears 2 by Tai forcing Dizzy to leave him. After the rescue, Delta ended up in Anvil and reunites with Hoffman and his daughter, only to find it being attacked by Locust and later Lambent.

After fighting off the two groups, Baird is able to decode the encrypted key and found the location of Azura, but is being protected by a man-made Maelstrom, preventing arrival by air or on sea. Hoffman mentions the location of a submarine in the ruins of Char, a nearby city, but they will need to fuel it up. Dom suggests traveling to Mercy, where an Emulsion filling station was located, but is also the home of Maria, Dom's deceased wife.

Marcus, Dom, Sam, Anya, Jace, and Dizzy went to Mercy to get the gas, while Baird, Cole, and Carmine went to search for reinforcements in Halvo Bay. The events of what happened with Baird, Cole and Carmine would be explained in Gears of War: Judgement, where Cole and Baird reunited with their old friend and former Gears member, Garron Paduk, who aided them in getting the necessary back up they needed. Back with Marcus's Group, they're able to make it to Mercy, but learn that the Emulsion has infected humans and are forced to flee. But as the Locust and Lambent move in, Dom took a nearby tanker and sacrifices himself to save his friends.

As the gears moved on, they came across the city of Char in ruins. Stranded now live there, lead by Griffin (voiced by Ice-T), a former Refinery owner who had a strong grudge against the COG. Despite this, he demanded they help him with a shipment that his men were suppose to get but never got, in exchange for some gas... and Dizzy, who they kidnapped. They're successful, but the Locust show up just as they're heading back, destroying the settlement and pissing off Griffin further.

After fighting off Locust and filling up the submarine, Delta ventured to Azura. When they arrive, they're greeted by Adam Fenix, via loudspeaker. He tells them how to shut off the maelstrom devise and reunite with Cole and Baird. When reunited Marcus tells them what happened to Dom, then Delta Squad go off to save Marcus' dad and end the war. Once and for all.

While fighting their way to Adam Fenix, they learn the real purpose of Azura; to keep safe the scientists of Sierra so they can help rebuild Sierra. They even learned that the C.O.G actually met with the Locust to find a way to prevent bloodshed from happening.

After a brief encounter with the Queen, Delta finally makes it to Adam. He tells them that he created a device that would kill the Locust and the Lambent for good and the Locust Queen, named Myrrah, wanted him to fix it so it would only kill the Lambent. While heading there, Delta is once again ambushed by the Queen, who tries to stop them. Delta fights off the Queen and Adam starts up the device. As it starts to take effect, Adam tells Delta that in order to test the machine, he infected himself with Emulsion. As the Machine takes full effect, Adam turns to stone and ash, right in front of Marcus. The Queen returns to boast how pathetic Adam was and Marcus stabs her with Dom's knife, killing her instantly.

The War that humanity had fought for years, was finally over. Marcus laid down his weapons, armor and trademark Do-rag and asked Anya what's left in this world, which Anya answered "tomorrow." This ends the original trilogy by Epic Games.

While Gear of War 2 introduced Hoard mode and refined gameplay, Gears of War 3 offered 4-player Campaign Co-Op and Beast mode. This mode acted similar to Hoard mode, but allowed you to play as the Locus. Gears of War 3 also introduced a short story DLC called RAAM Shadows, a prequel that told the story of Zeta Squad, consisting of Gears 1's Kim, Gears 2's Kai, new character Alicia Valera, and Michael Barrick (who fans will know from various comic appearances) as they tried to take back a city from General RAAM.

Gears of War 3 was met with critical acclaim, with a 91 on metacritic and won numerous awards, including best Shooter from IGN, Gamespot, and G4, as well as best 360 game from G4 and best Co-operative game from Gameinfromer. The game sold over 3 million copies within its first week, out selling it's predecessors. It was announced a week later that Gears of War, as a series, grossed over $1 Billion.