Bioshock: The Collection Details Revealed By The ESRB

Bioshock: The Collection will contain all three games, but still has no official announcement by 2K.
by Eric Levy

After being reviewed by multiple ratings boards -- most recently in Taiwan -- the ESRB has rated Bioshock:  The Collection M for Mature.  Although it has since been removed, Gematsu was able to capture the game's description from the ESRB's website.  While the ESRB goes on to talk about the reasons that warrant an M rating -- such as blood and gore, profanity, depictions of violent and sexual situations, etc. -- there was one paragraph that caught my eye in particular:

This is a collection of three first-person shooters in which players assume the role of characters uncovering the mysteries behind the dystopian societies of Rapture and Columbia. As players explore each city, they use shotguns, machine guns, rivet guns, and rocket launchers to kill mutated citizens and enemy soldiers. Players can also use special powers (e.g., telekinesis, fire blasts, electric bolts) to kill enemies as well as a three-pronged hook to dismember and decapitate them. Large blood-splatter effects occur as enemies are injured; pools of blood can be seen around corpses.

Rapture AND Columbia??  It sounds like we'll be getting all three main games in the collection -- although the awesome box art pretty much confirmed that when it leaked. 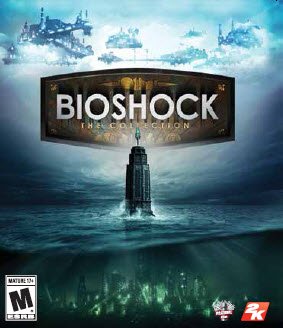