The best retro gaming consoles for your OG gamer needs.
by kate.farrow
Commerce

With the NES: Classic Edition (aka mini NES) coming out this November, and a SEGA mini Genesis on the way, you may feel the need to dust off your old systems and boot them up again. What? You don’t have your old systems?! Inconceivable!

No worries, though. These systems will save your retro-deprived soul. You’ll be groovin’ to 8-bit tunes in 7-10 business days. Remember, you can’t use physical cartridges with the NES: Classic Edition, so now’s your chance to snag the OG NES. 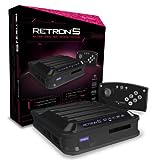 Play all the retro games on one machine. Really. It will play NES, SNES, Super Famicom, SEGA Genesis, Mega Drive, Famicom, Game Boy, Game Boy Color, and GBA cartridges. If you have a lot of cartridges, but non-functioning consoles or don’t want to mess with converters and adapters, this is the solution for you.

In more of an arcade gaming mood? The Neo Geo X has your back. It comes preloaded with 20 arcade games, and this edition gives you the Neo Geo X Station, the Neo Geo X Handheld, and the Neo Geo X Joystick. You can save almost $100 by going with a used version, starting at $189.

Here’s your chance, guys. Finally, you can load up Duck Hunt and Super Mario Bros again! (Note - depending on the seller it may not come with hookups or controllers).

If you’re a hardware enthusiast, here’s an original SNES. The console is definitely used, as it has been out since 1991. If you really want a new original SNES, though, there do appear to be some available if you’re willing to spend upwards of $600.

And for you SEGA enthusiasts, the Model 1 Genesis. Again, check with the individual seller for what comes with it.

I’m always looking for new awesome products, so please send me your favorites at commerce@LaunchMediaNetwork.com.

Automatically likes most games in which you can ride a horse at will. Gets claustrophobic when exploring buildings in Fallout 3 and at no other time ever. Enjoys tea, puppies, and swords.