Don't Starve has been out of early access since 2013 at this point, but its developers are still updating the game full steam ahead in 2015. The Reign of Giants DLC that came out last year added plentiful content for Don't Starve veterans. Klei Entertainment is currently working on a free content update called Don't Starve Together—which will add multiplayer into the game. 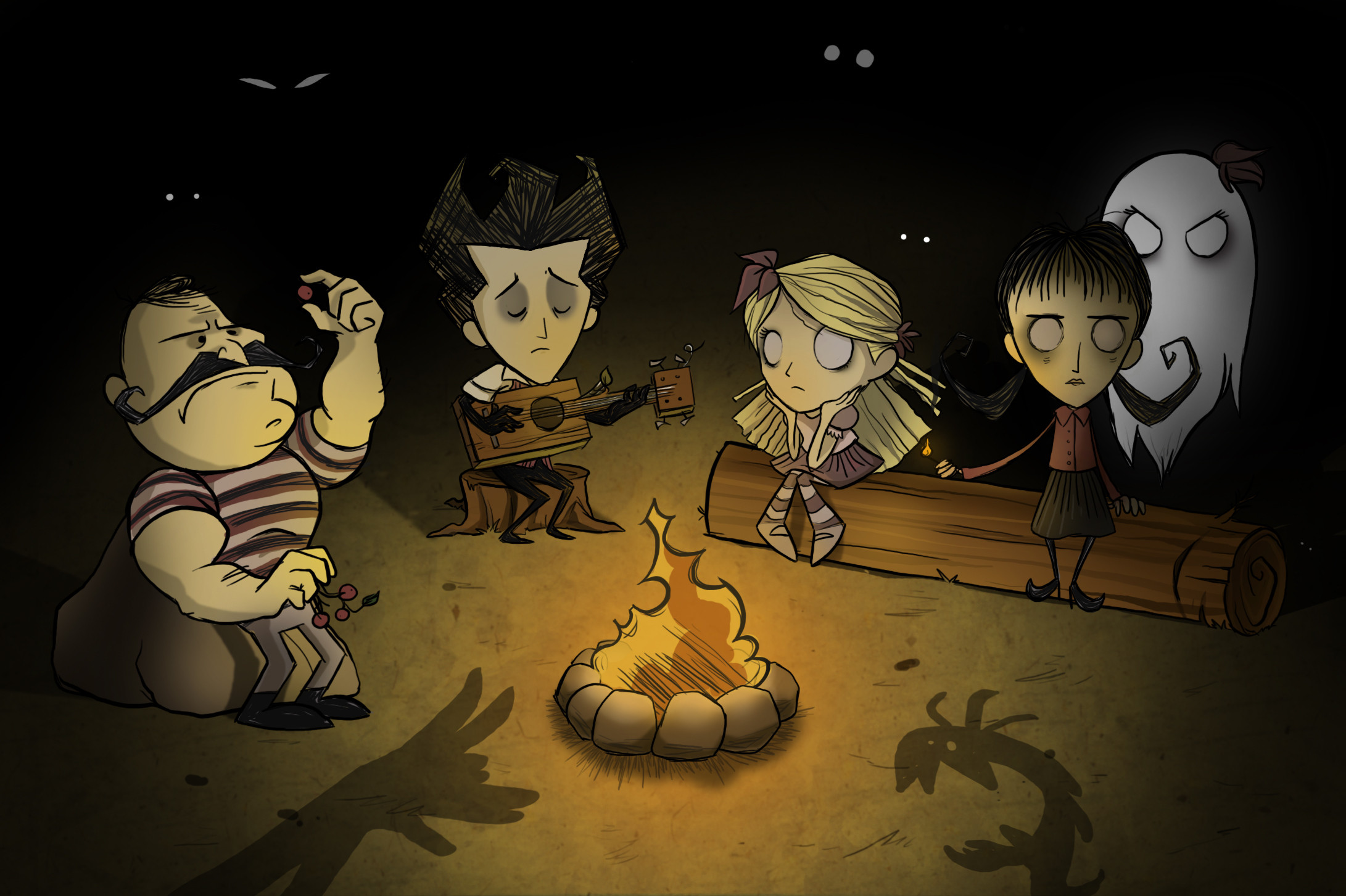 What is Don't Starve?

Don't Starve is a survival game in the deepest sense of the word. You start out void of any resources and are expected to build yourself up from nothing. Sound familiar? There's a catch. 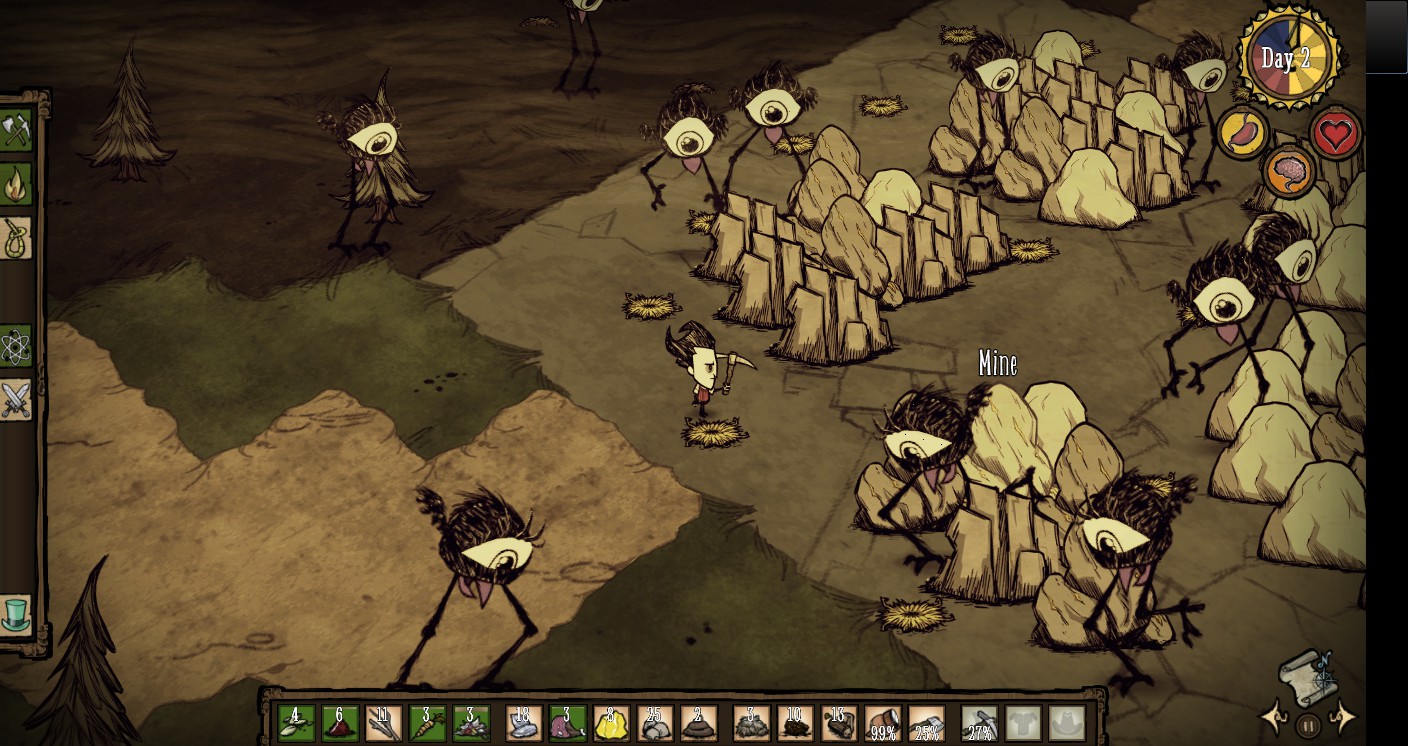 Not only do you have your health to watch, but you have your hunger and sanity to closely manage, least you lose yourself to this harsh, Tim Burton-esk world. If you die, you die. There is no respawning in front of your bed, your world is done.

Congratulations, have some experience points for taking 2 days to die.

Experience points in Don't Starve work in a way very similar to rogue-like games, as opposed to Minecraft. In rogue-like games, you often have an array of characters with special starting abilities that you unlock after completing an in-game achievement.

In Don't Starve, when you die, you are awarded experience points towards your next level. Reaching a new level will unlock a new character to place into this demented world. So while dying in Don't Starve may be a traumatic experience, it at least doesn't go unrewarded. 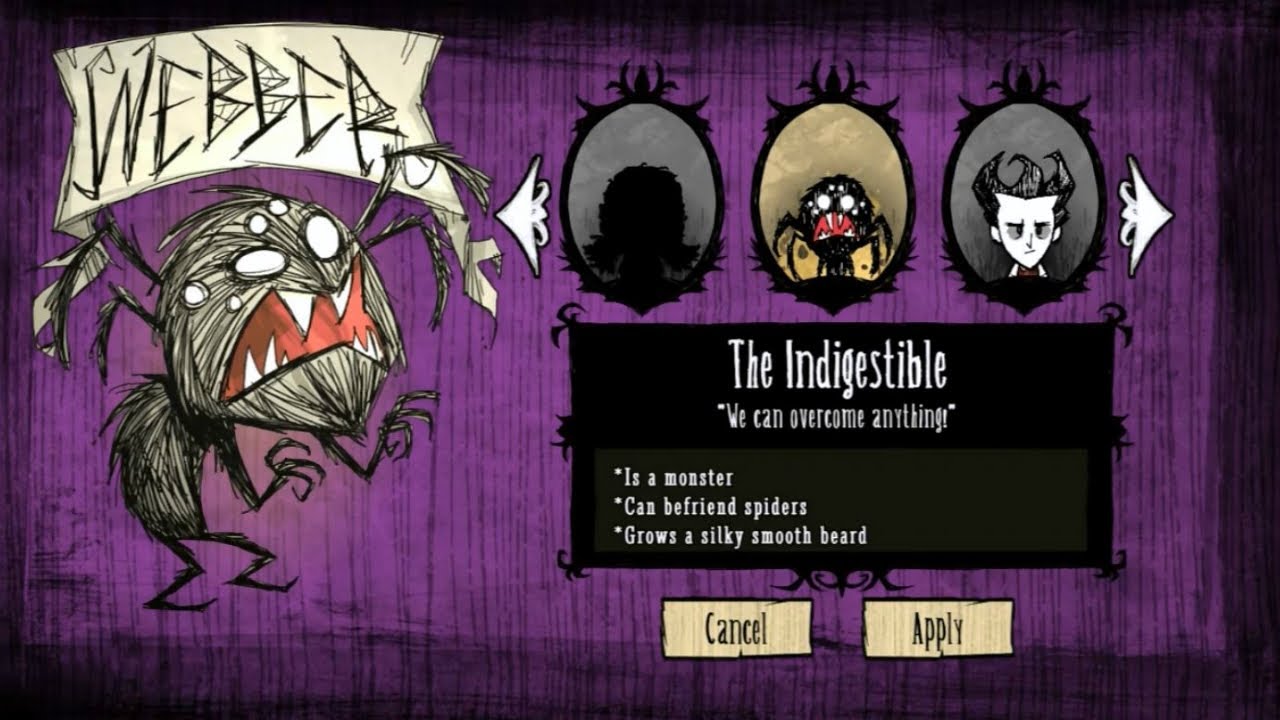 Starving is the least of your problems...

...Yet it is still a problem. The Don't Starve wilderness is terribly unforgiving. Simply being caught out in the dark without a light will instantly kill you. Attacking monsters often comes with a huge dent to your sanity—and going insane will only leave you more vulnerable when the time comes. 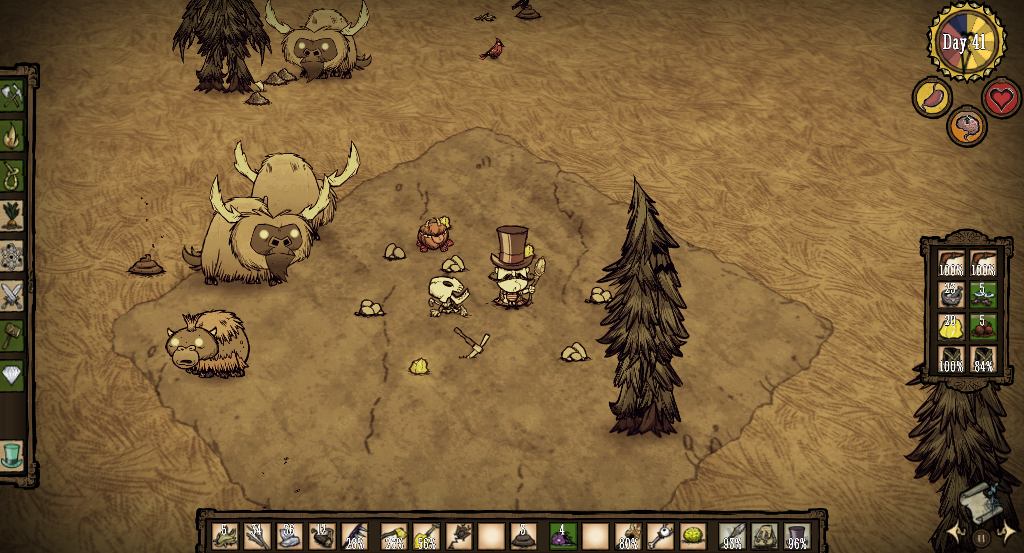 The world will throw so many random horrors at you, you'll start to wonder if you are still sane yourself. For example, I was spending a leisurely afternoon collecting logs and cutting down trees when all of a sudden one of the evergreens transformed into this walking, swiping behemoth of a tree—which promptly killed me.

You cannot just chop down a log and place it as a wall to protect you from the harsh outdoors. You're going to have to prototype a few walls at a science machine before you'll ever get even slight protection from the great outdoors. 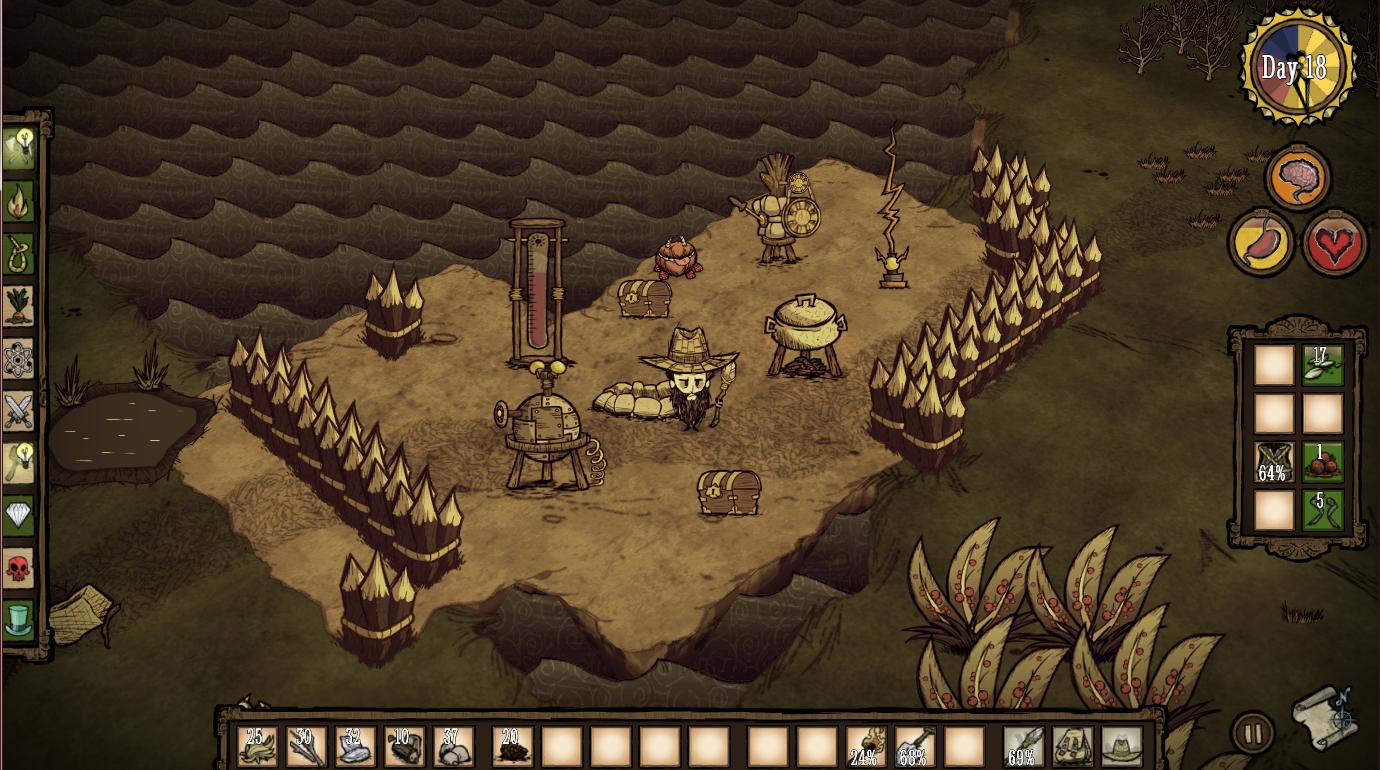 To gain new crafting recipes, you must first build yourself a science machine, which will inspire new ideas for prototype. After prototyping, the item can then be crafted at any time.

There is actually a story 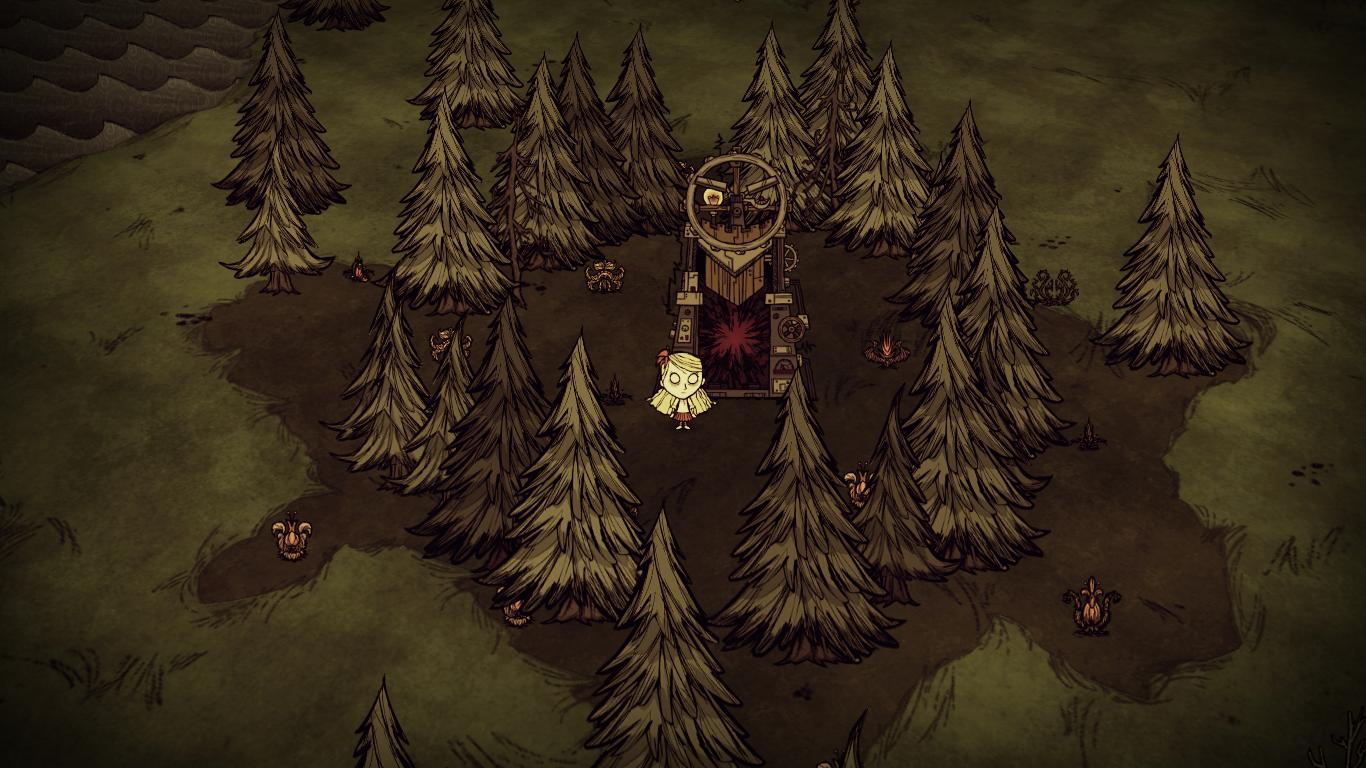 While exploring the wilderness, you may come across a portal called Maxwell's Door that leads to Adventure Mode. I haven't even had the good graces to witness this portal yet, but I know it's there and opens up a lot of the questions you may have about this dark and mysterious world.

While a Don't Starve year is much shorter than our own, they most certainly have distinguishable seasons: Summer and Winter. The game starts you out at the beginning of Summer, and you'll witness the nights gradually become shorter as you progress in the early days. Eventually, the nights become longer and the land slowly transitions into Winter. This isn't just for aesthetics, either: the world is even more punishing come Winter—and I hope you're ready when it comes.

Along with the flow of seasons comes the slew of mother nature at her finest in Don't Starve. Don't even think about interupting Beefalo during mating season. Oh, and just take some time away from your pig friends when the full moon comes near. They have an increadibly...violent moon cycle.

Don't Starve's only DLC, Reign of Giants, even adds in the Autumn and Spring seasons. Though I wouldn't just go running around Reign of Giants fresh off the digital shelf.... 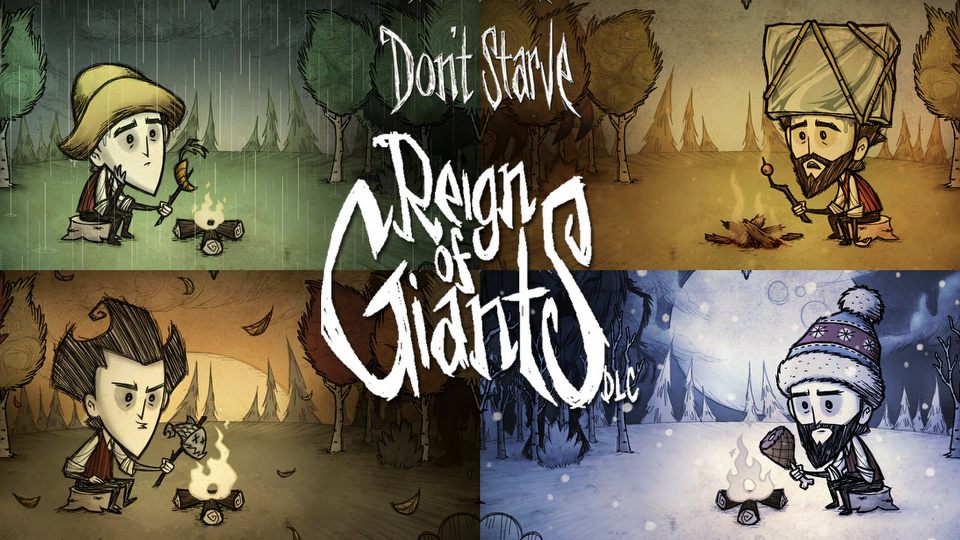 Reign of Giants DLC is basically a Hard-Mode

Don't Starve Reign of Giants is a difficult adventure tailored to Don't Starve veterans. I haven't been playing long enough to feel as if I were ready for it, but it looks like a blast. There's an option to toggle it off whenever you create a new world, if you're not quite ready like me.

One key for all your devices 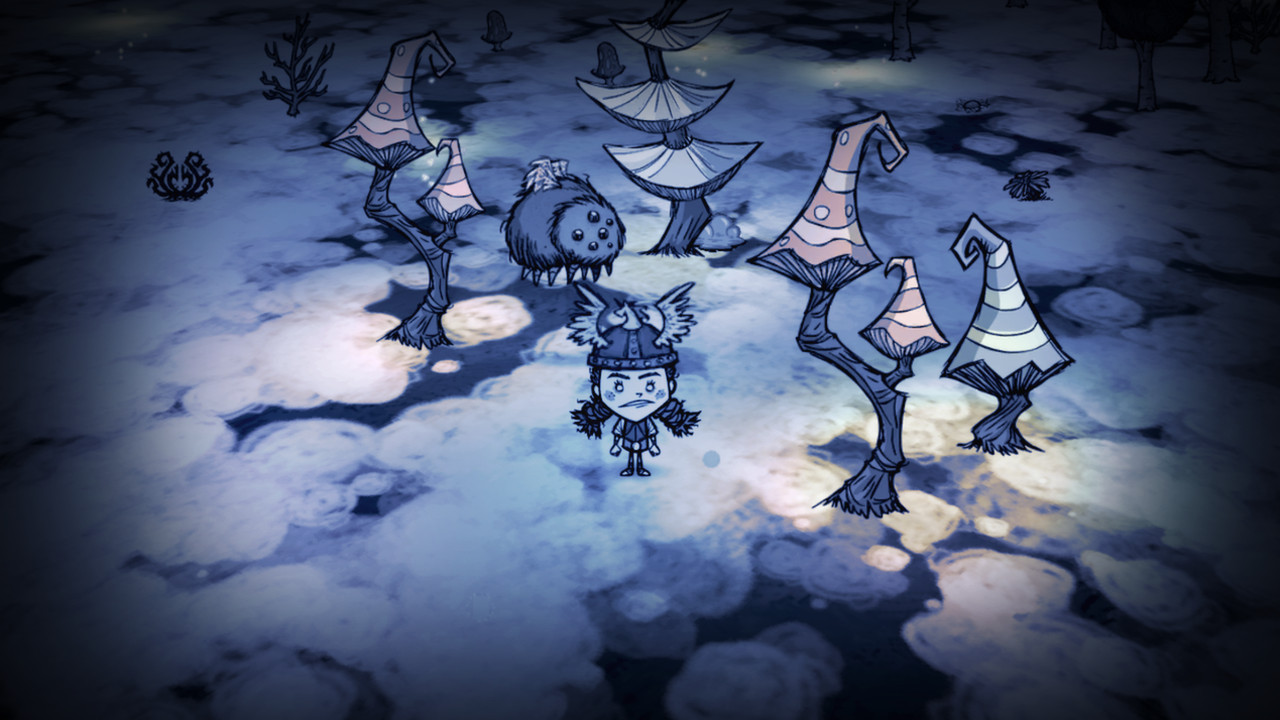 No Steam? No problem. Don't Starve can easily be played and patched through a basic updater, that way it doesn't need services like Origin or Steam to run properly. The keys they give you when you buy the game are redeemable both for Steam and the DRM free version—and they are always available to you.

That way, even if Valve decides to prematurely shut down the Steam services, you can still brave the wilderness of Don't Starve time and time again.

If you like survival games, or even games with darker themes, Don't Starve might be something you want to check out. The game has changed a lot over the course of the last year and a half, and is always worth another go if its been collecting dust on your hard drive. 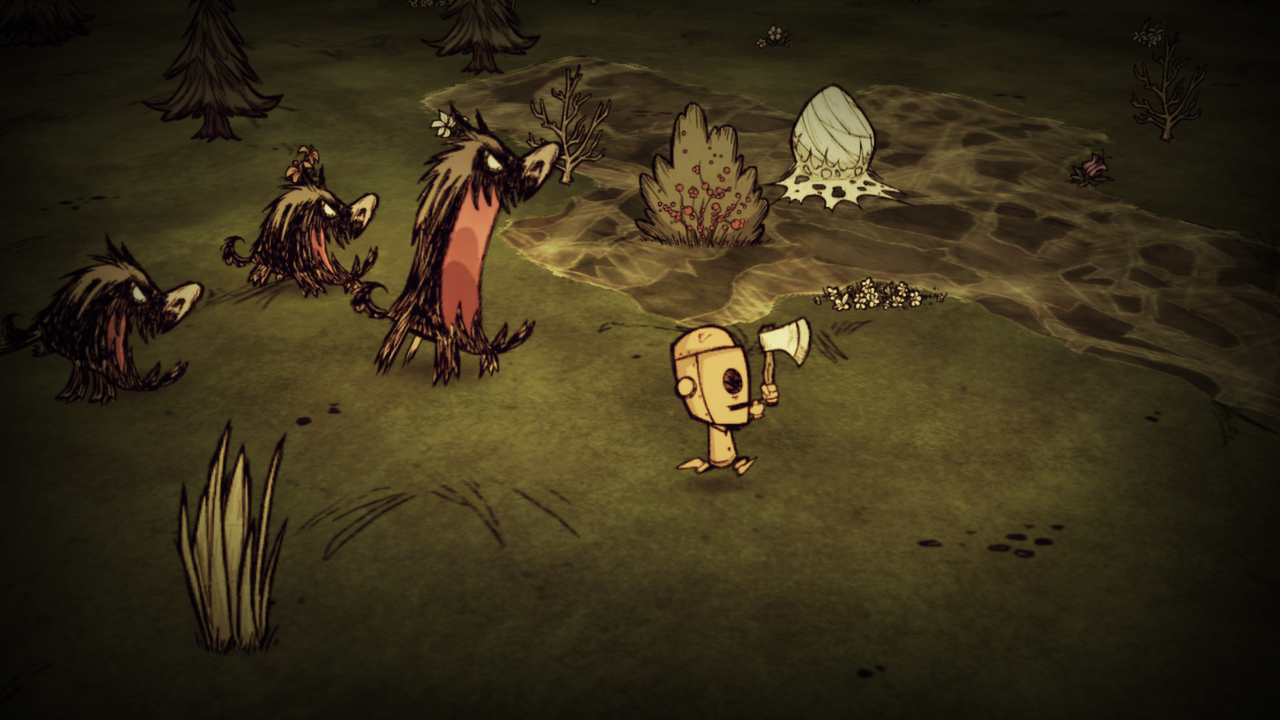 Don't Starve is really shaping up, and it gets my strong recommendations. The art style is eerie and dark, the soundtrack is unique and fitting, and it cleverly blends rogue-like elements into a survival heavy game.