Volume Review: Stealth goes back to its roots

Volume is a witty, addictive stealth adventure that fans of the genre will not be disappointed.
by Jeff D_7921

Metal Gear VR Missions finally has its own game! Just kidding -- but it's close enough! From the creator of Thomas was Alone, Mike Bithell, Volume has taken the stealth genre back to its roots. By stripping away all the excess RPG elements and open world gameplay that has entered into other successful stealth franchises, Volume is able to focus on the core gameplay. This allows us to remember what made the stealth genre popular in the first place -- tense, deliberate gameplay. Something the game nails really well.

Volume is a clever, engaging title that combines excellent puzzles with solid stealth gameplay. Although it has some faults, the addictive gameplay kept me coming back for more, overshadowing the cracks in the game's armor.

The plot in Volume can be summarized as a modern take on Robin Hood. Protagonist Robert Locksley is a petty thief who finds a device called a "volume", which runs simulations for a military training program. Guards train on the virtual front to learn the blueprint of the areas they protect so they can best prepare to protect valuable treasures.

Locksley runs through the programs and broadcasts his path throughout the web so that other thieves can study how to break into the places via simulations. An A.I. within the volume, called Alan, assists you along the way by setting up the levels, providing witty feedback, and etc...

Overall, the plot in Volume is inconsistent. Key characters will often disappear for five or more levels. When characters do speak, their dialogue box often obscures the player's point of view, making it difficult to complete levels and forcing them to wait until the conversation is over before proceeding. In some regards, it may have been better to just remove the story from the game completely, or at least just give us the intro and leave it at that.

Surprisingly enough, Volume is a quiet game. Little to no music is played throughout the game (with the exception of a funny rap song in one level). This actually helps the player to hone in on key sounds, since each noise in the game is deliberate and can be the difference between a close call and getting caught.

Much of the sound design comes from the dialogue between Alan and Rob, along with normal chatter from guards. Noises are key in distracting enemies, and can range from a whistle to a toilet flush. Rob has an arsenal of gadgets that can create sounds from specific locations. Items such as the bugle can be stuck to opposite walls, luring guards to a certain area and allowing you to slip through. Alarms also sound when guards spot you, jumping to a opera music tone to hint that you are being chased. 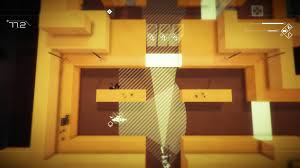 The best way to describe the visual design in Volume would be to say that it looks remarkably similar to the VR missions in Metal Gear Solid, which isn't a bad thing. Although the visuals are simple, they are incredibly efficient at laying out objectives. There are no wasted details or backdrops to distract the player. Everything has purpose, which is refreshing in this day and age.

The simulations load computerized room layouts and have a great use of color scheme. White often signifies walls that can be vaulted, along with gadgets, lasers, diamonds, and the end gate. An enemy's field of vision is also displayed, assisting with studying patterns and avoiding detection. I enjoyed the cone of vision, because it holds the player responsible -- if you get spotted, it's your own fault.

This can seem overwhelming at first, but the game does a great job of easing you into it and spacing out the obstacles enough that they don't crowd the screen. Even more impressive is that no two rooms feel the same, keeping the game from feeling bland and repetitive.

Developer Mike Bithell has created a title that blends intricate puzzles with tight, simple, stealth gameplay. There are over 75 levels in the core campaign, each with a start and end point. Before the end gate can be activated, however, players must collect all of the treasures first. There is no way to kill or incapacitate enemies, so this is a pure stealth adventure.

Volume is very much a game about patience, which requires studying enemy movements and knowing when to proceed. Often, it's about figuring out which gadget to use in a given situation, making the game feel just as much like a puzzle game as it does a stealth game. The A.I. is perfectly balanced, and checkpoints are spaced out adequately to avoid frustration, while still providing a sense of accomplishment upon clearing each level.

As the game progresses, more gadgets are opened up to your disposal. This offers more options for tackling levels as well, depending on your play style. There is even a Pac-Man-inspired level to mix things up a bit. I just wish there were more levels along those lines.

My only complaint is that the controls can feel a bit delayed at times, with my character moving a little bit after I stopped moving the analog stick. Also, aiming some of the projectiles can be a little finicky, but these are minor complaints.

I played Volume on both the PS4 and PS Vita. The game holds up surprisingly well on the Vita. The PS4 version is sharper, with better textures and slightly better controls, but I actually prefer the Vita version. This is because I feel like this game is better suited for on-the-go gameplay where I can pop it out to play a few levels while on my break.

Overall, Volume is a game that has clearly done its homework in replicating the games that it takes influence from. Although the inconsistent story and sometimes delayed controls can be annoying, it is otherwise a solid experience that fans of the stealth and puzzle genre should definitely pick up.

Our Rating
8
Volume is a witty, addictive stealth adventure that fans of the genre will not be disappointed.
Reviewed On: PlayStation Vita
What Our Ratings Mean