Send your enemies to the Shadow Realm with Yu-Gi-Oh Duel Links.
by Marc Anthony

However, the game itself plays very well and is addicting -- for veteran fans of the franchise and for newcomers alike. I know I've logged in every day since download, and I have a feeling that I'm not the only one.

The game itself is based on a ranking system of stages that reward players with cards, items, gems, and other loot for performing tasks like beating duelists or trading cards with the card master. The character you choose will battle NPCs in the Duel World, and face other popular characters so you can unlock them for future use. Your starter choices are Yami Yugi and Seto Kaiba, but as your roster expands with new unlocks you'll be able to level each individual character and switch between them freely.

For fans of the anime, the roster of characters will be a huge draw. Here are all the characters you can expect to see:

Duel Links is almost an exact replica of the original Yu-Gi-Oh! game with minor tweaks to make the application more fluid and easy to understand. The game does not allow five monster and trap/spell card slots -- instead it only allows three, to prevent any sort of drag in PvP battles between opponents. To that end, a time limit has also been added.

The rules of the game are mostly standard, with just few changes. These include the standard life points being set at 4000, the removal of main phase 2, and the addition of skills that give you attributes in the game for particular advantages. 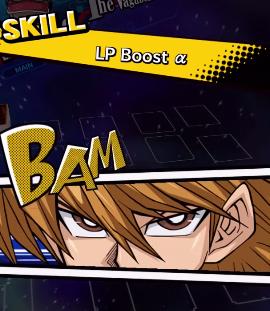 Duel Links' gameplay is more fast paced and easy to comprehend for newcomers to this card-based battle franchise. The game does a fantastic job at tweaking core Yu-Gi-Oh! elements into a version everyone can play and master. It teaches players how to play in an easy way, and it's been streamlined so that newcomers won't feel overwhelmed with the multiple slots and an array of effects.

Additionally, Duel Links only includes the original cards from the first series -- which are easier to grasp for newcomers, as they have less complicated effects/set-ups and require less precision to play. If you haven't gotten into this franchise already, Duel Links is the best time to jump into Yu-Gi-Oh! and understand its gameplay in a more simplified manner.

Yu-Gi-Oh! Duel Links is available in the App Store and Google Play.