Everything we know about Dark Souls 3 [Spoiler-Free]

Dark Souls 3 combines the best aspects from past Souls games and spices up the formula with it's own unique flavor.
by Autumn Fish

Dark Souls 3's release date is fast approaching, with it hitting western shelves on April 12th, 2016. Take a moment to let that sink in. Nothing can prepare us for the trials of death and sacrifice that await. That is, nothing but what little knowledge we scrounge up.

That's right, we're discussing Dark Souls 3 features today. Now, I know many of us are avoiding spoilers; a blind playthrough of a Souls game is among the best video game experiences available. Though fear not, I threw myself in front of spoilers so you don't have to.

Series veterans will feel right at home in Dark Souls 3. Traditional, weighty Souls combat returns with impeccable hit-boxes and a speed more akin to Demon's Souls than the original Dark Souls. New or prospective players should expect deep, challenging, and rewarding combat. Dark Souls prides itself in being difficult but fair, so don't let the learning curve chase you away prematurely. 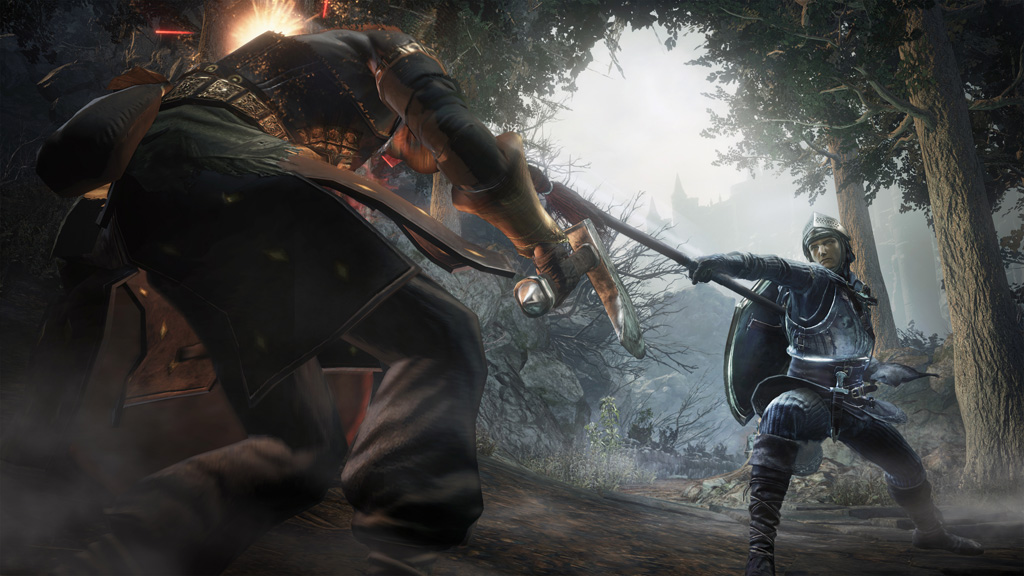 On top of all of the cool attacks and moves you could pull off in previous entries, Dark Souls 3 has expanded the moveset to give players even more mixup options in both PvE and PvP. The new options include:

Along with the expanded moveset, FromSoftware also slightly modified two-handing for certain weapons. For example, a dagger cannot be wielded with two hands anymore; instead, your character will pull out another dagger for their left hand. This allows for crazy dual-wielding movesets that just aren't possible by equipping a weapon in both hands. Unfortunately, this also means Power Stance from Dark Souls 2 has been replaced.

Lock-on is a great tool to keep track of enemies in the heat of battle, but it's historically caused problems by restricting your character's movement. Luckily, it doesn't seem like that's the case in Dark Souls 3. Rolling is omnidirectional, and we can now sprint backwards while locked on.

Equip Load makes a return in Dark Souls 3, weighing in the burden of equipped weapons and armor. This affects everything from stamina regeneration to running and rolling speed. As far as I can gather, the only adjustment in weight class hits at 70% Equip Load, where you become overburdened. 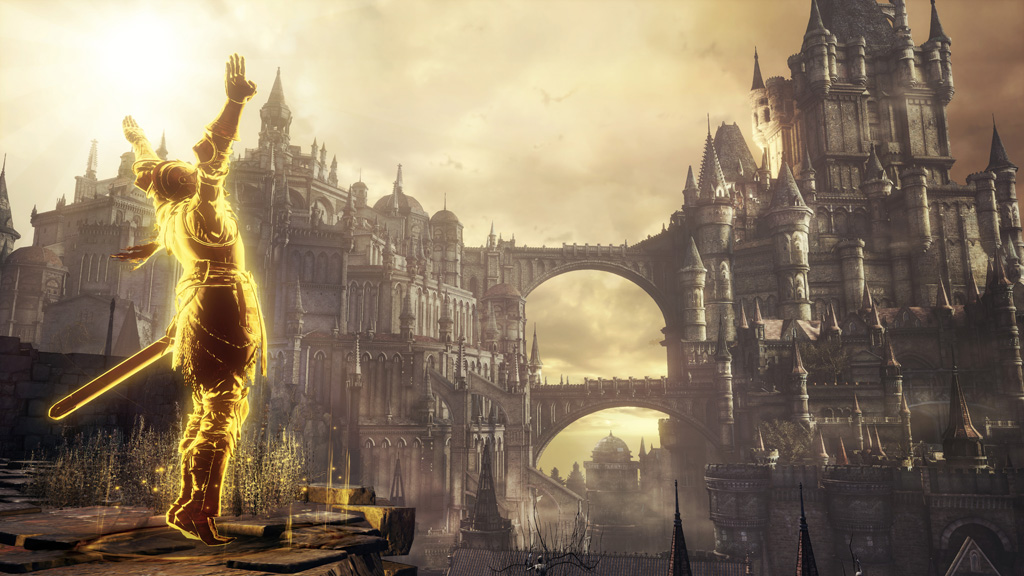 Dark Souls 3 has mindbogglingly dense level design. The map may seem small, especially compared to open world games, but the dense levels are packed full of opportunities for exploration.

Newcomers to the Souls series shouldn't expect an in-game map. In truth, the crazy level design would never support anything like a mini-map, though it is absent to boost immersion and replayability.

Instead of littering Bonfires (read: checkpoints) across the map, there are multitudes of shortcuts that open up to connect the few Bonfires scattered about with the rest of the level.

Every enemy or aggressive character is designed to kill you, and you will die to many if not all of them. Since the majority of enemies infinitely respawn (whenever you die or sit at a bonfire), there is no easy way to progress without evaluating the situation and learning what you're up against.

From what we've seen so far, the variety of enemies in Dark Souls 3 is breathtaking. It seems that FromSoftware drew plenty of inspiration from Bloodborne to imagine the crazy monstrosities for this entry. They even brought back Bloodborne's blood splatter effect, though greatly toned down. 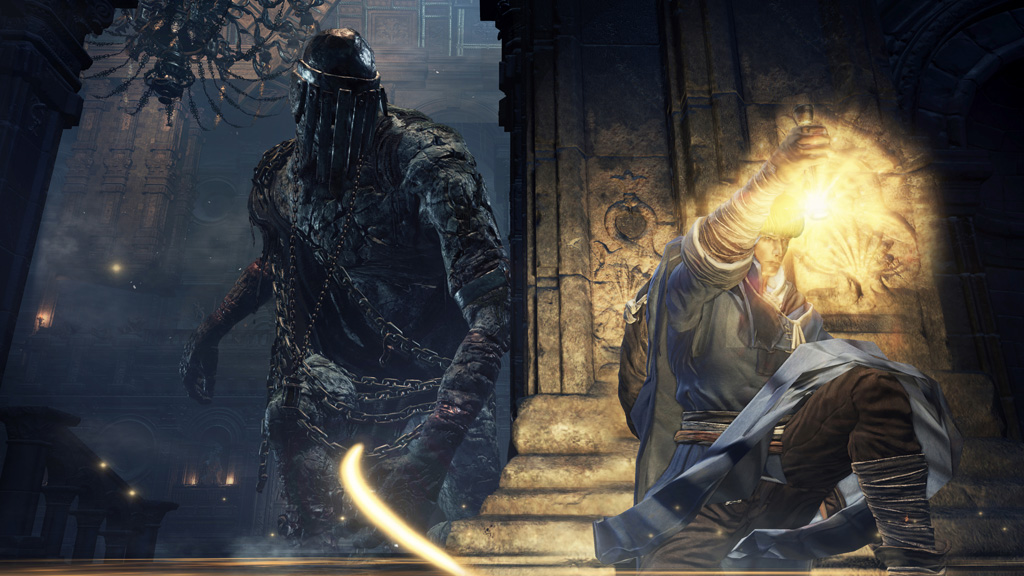 New to Dark Souls 3 is a blue status bar called Focus (FP) nestled between Health (HP) and Stamina. Instead of using charges, spells and the newly introduced Weapon Arts drain the blue Focus bar when used.

Unlike Stamina, Focus does not regenerate on its own. In the absence of FP, spells will fizzle. It is worth noting, however, that some Weapon Arts may be used without Focus, albeit with reduced impact.

Estus Flasks are the staple healing potions of Dark Souls. Our stock of Estus is recovered at Bonfires, but we can only carry so many. This time around we have not one, but two different types of Estus Flasks.

Joining the original Estus Flask in our quick bar is the Ashen Estus Flask that recovers Focus rather than Health. Players choose how many Estus and Ashen Estus they want to carry by reallocating the flasks. A beginner with 4 total flasks could run around with 2 Estus and 2 Ashen, 3 Estus and 1 Ashen, 0 Estus and 4 Ashen, or whatever combination they so desire. 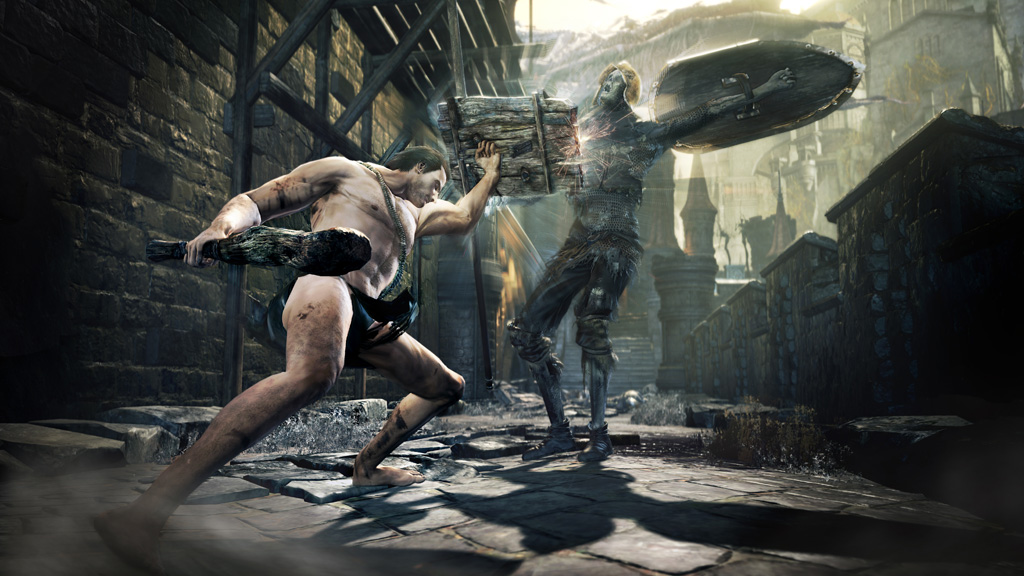 Resting at a Bonfire will heal you, repair your degraded equipment, and restore your Estus Flasks. Shortly after the game begins, players gain the ability to warp to any Bonfire they've previously visited.

It's great that warping opens up so early, because we can't level up at Bonfires like in the original Dark Souls. An NPC that hangs out in the HUB will handle all character level ups. New players should note that there is no level cap, and while the stats all cap at 99, they all traditionally taper off around 50.

FromSoftware decided dedicating hours fiddling with your character's appearance -- and spending most of the game as a zombie kind of sucked, so they did away with the entire humanity concept for Dark Souls 3.

Finally we walk around looking like the character we made in the creator, but now there's an ember form that adds an interesting singed effect to them when active. Not only that, but it boosts our maximum HP by 40%. 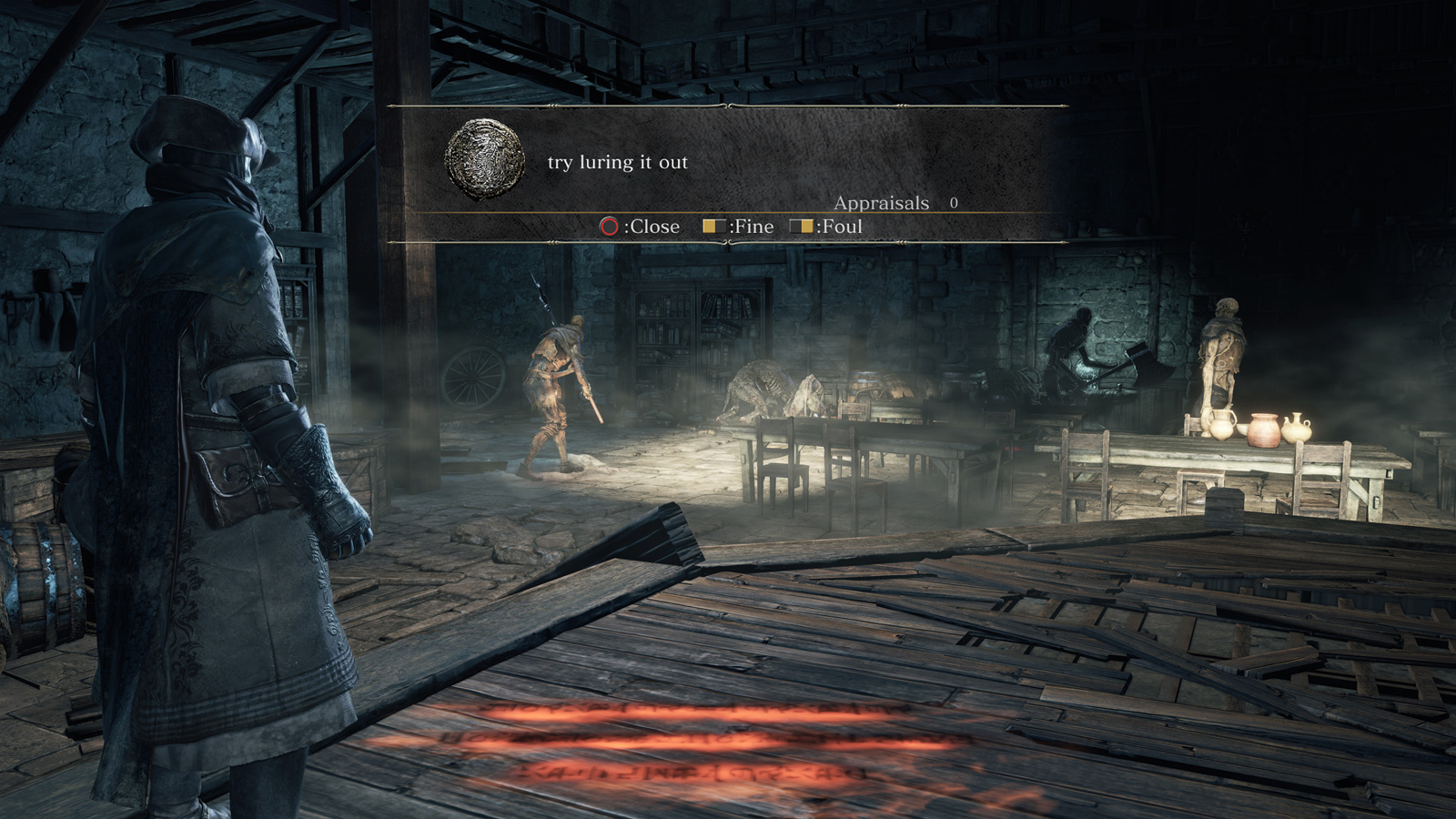 Dark Souls 3 seamlessly integrates a multiplayer experience into what feels like a singleplayer game. Orange messages scrawled about are left by other players often looking to tip off a fellow Undead of the dangers that await them.

Later on in the game you'll gain the ability to co-op with players online by summoning them to your world or plopping down your own sign and being summoned.

Ember form lets you summon co-op partners, but it also opens your world to invaders. These player-controlled phantoms will kill you to profit off of your souls and spoils, so watch your back.

Equipment upgrades are back with tweaks and changes inspired by FromSoftware's recent titles. Normal upgrades go up to +10 while special equipment caps at +5.

Infusions are once again separate from basic upgrades a la Dark Souls 2. As before, both weapons and shields may be infused. Reportedly there are over 200 weapons in the game; we have plenty of variety to experiment with.

Boss Souls in Dark Souls 3 can go through Souls Transposition to become a Weapon, Ring, or Spell. Many of the Boss Souls appear to create more than one item, so NG+ runs will be necessary to obtain everything.

However, like Bloodborne, it seems as if armor cannot be upgraded in Dark Souls 3. Instead, leveling up different stats more heavily influences our various defenses in an odd-yet-wondrously logical way. (i.e. Strength increases Fire Defense.) 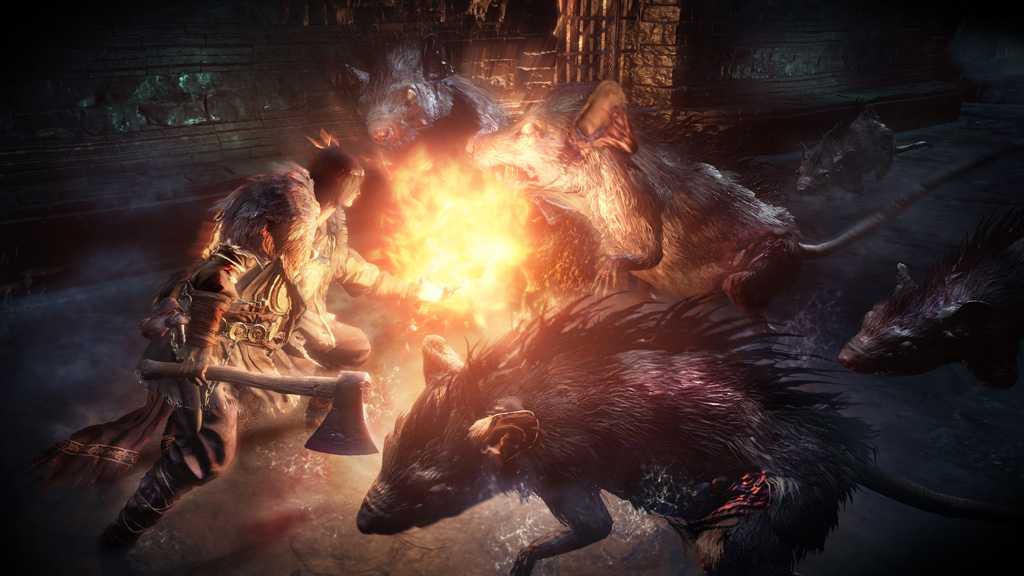 Players may reallocate their stat points at an NPC in Dark Souls 3. Though unlike Dark Souls 2, there appears to be a limit of 5 respecs per character. It's unconfirmed whether there's a way to work around this limit -- via NG+ or otherwise -- so be frugal about respeccing.

New to Dark Souls 3 is the chance to modify our appearance after character creation. However, changing our character's gender post-creation appears to be impossible at the time of writing.

In this section, I dive into our options for character creation and builds. All of us want to stand out among the crowd, and I know many will want to be prepared. If you're intent on staying in the dark about character creation, you may want to duck out now. Don't say I didn't warn you. 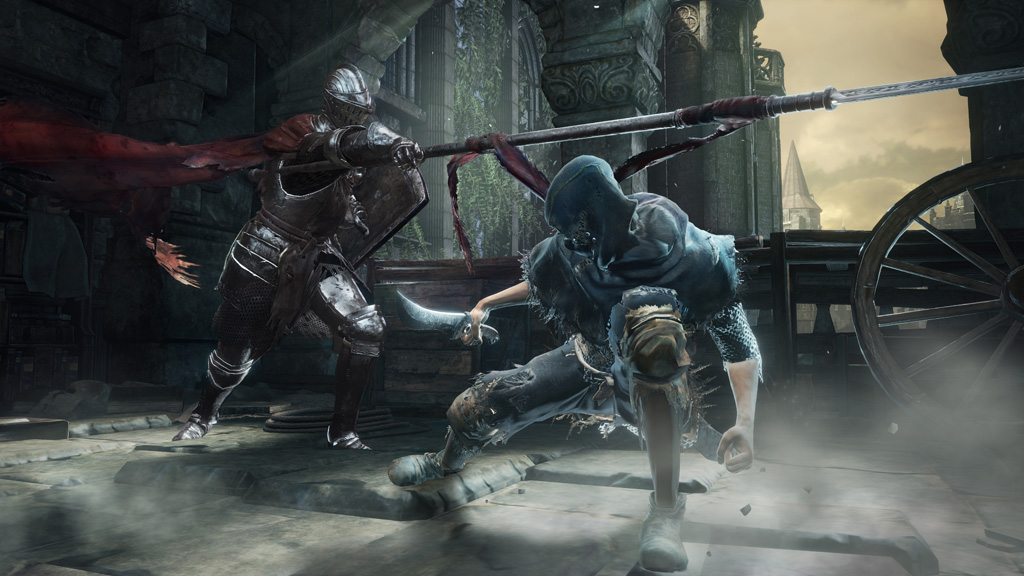 Before we get into the heavy RPG-side of the character creator, let's touch on the most important thing: hair. In case you missed Bloodborne, you'll be happy to know that hair now has physics, not just your armor.

Alongside a fine selection of facial hair, players may even choose to give their characters body hair in Dark Souls 3.

Personal obsession with hair aside, FromSoftware has made huge improvements on player-character appearance since Dark Souls 2. Finally we get to make convincingly human characters alongside our Frankenstein abominations.

There are 9 level-up stats in Dark Souls 3: 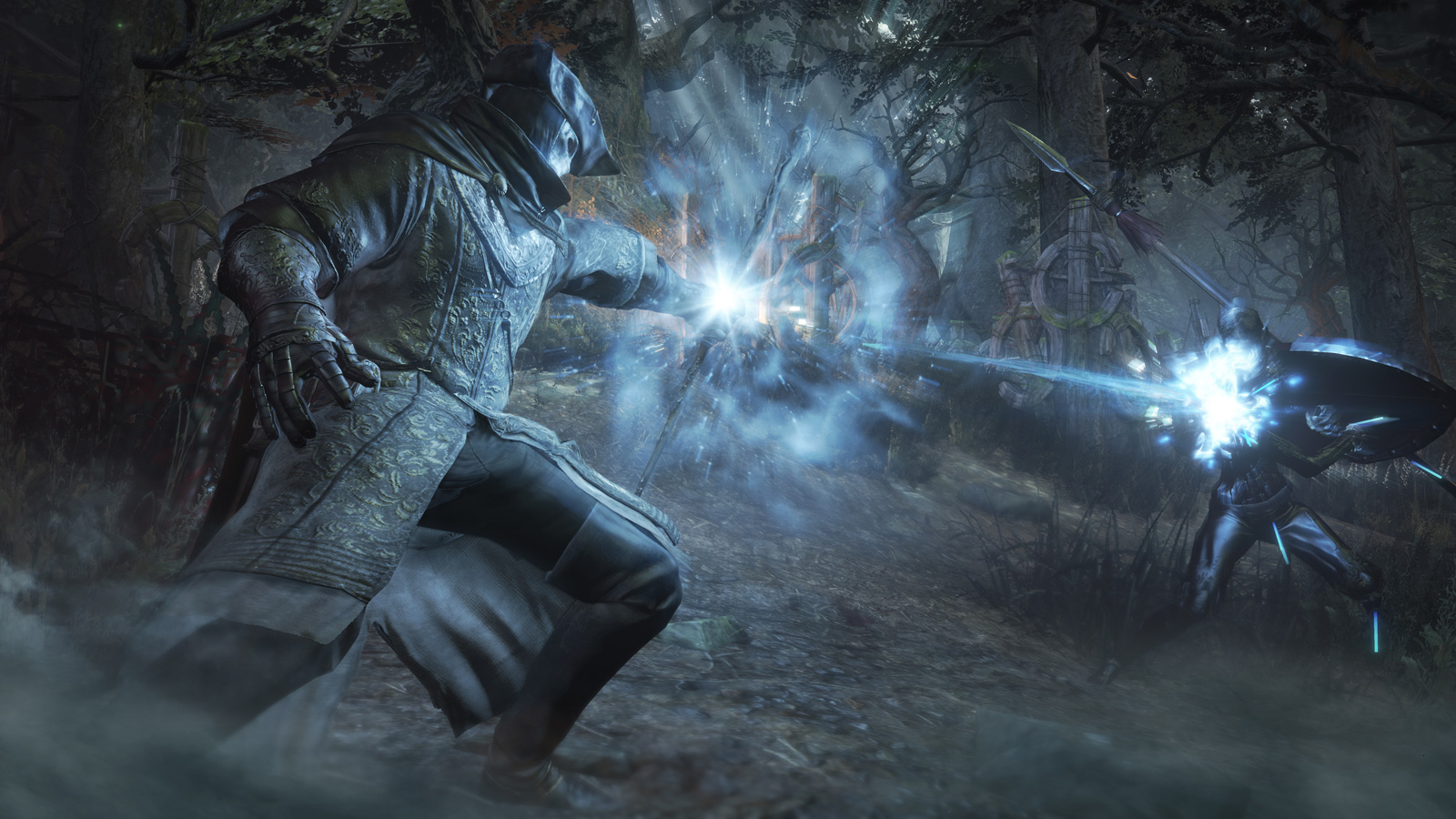 There are 10 character classes to choose from that start at different Soul Levels (SL) with unique stats and equipment. Since we can spec any stat we like, these classes are just a springboard to reach our desired character builds quicker and should be treated as such.

I know people were worried about how many slots we'd have for weapons, rings, and quick items this time around, and it seems like things aren't too different from Dark Souls 2.

As usual, there are 4 armor slots: head, torso, arms, and legs. There are 3 weapon slots for each hand and 3 projectile slots for both arrows and bolts. Additionally, characters can wear 4 rings and 1 accessory -- which is how we pledge and change covenants in Dark Souls 3. On top of all that, there are 10 quick item slots. 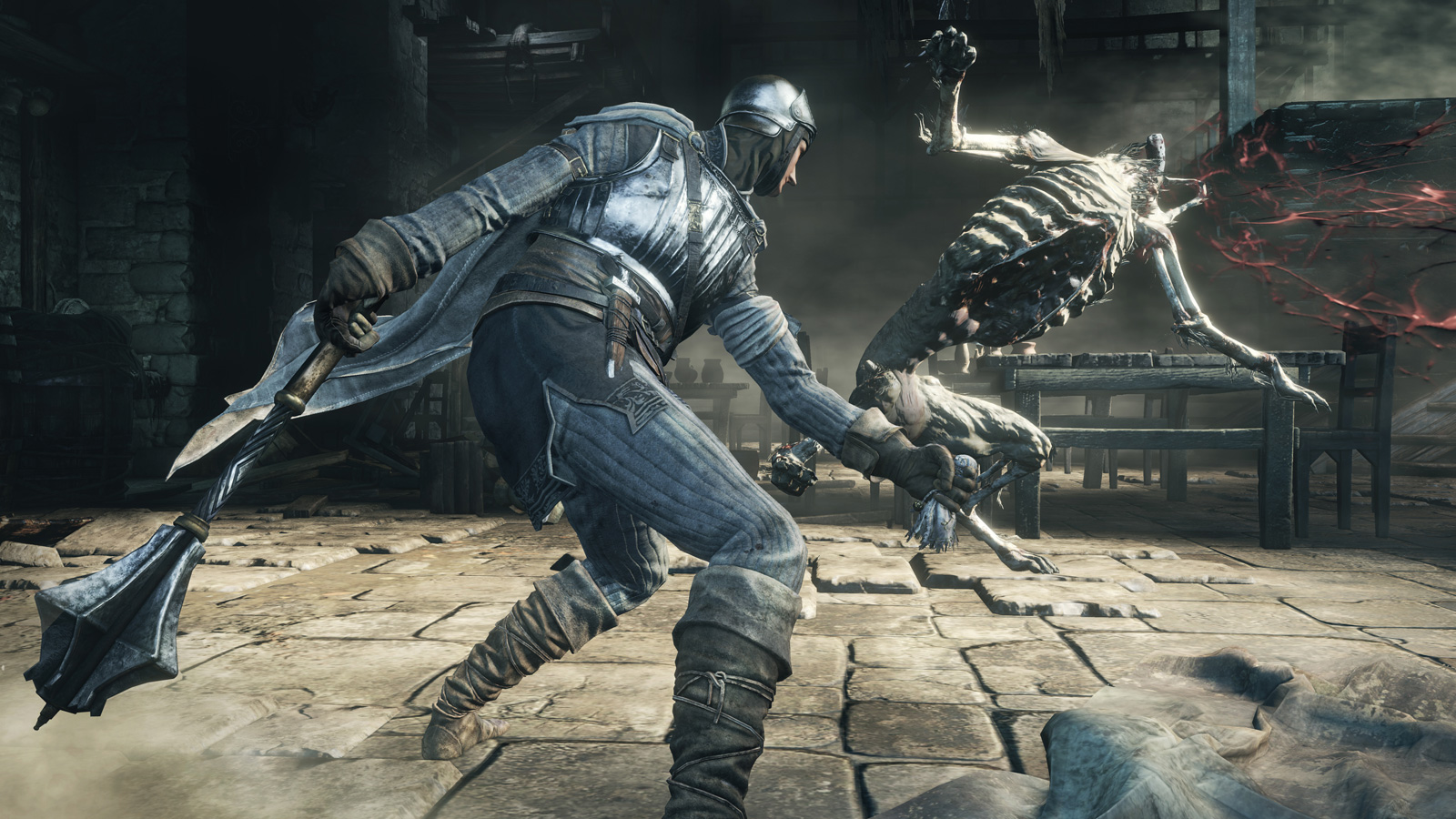 There are 15 Infusions in Dark Souls 3, more than we've ever had in a prior Souls game. There aren't many details about them right now, but they seem to make some of the wilder builds -- like pure Luck -- totally valid.

There you have it, every Dark Souls 3 feature we know without diving too deep into spoiler territory. What features are you most excited for? Ride out the hype train in the comments below.