Taking a Look Back: Koopa Kids

Even the King of the Koopas needs help with the Mario Brothers but can his kids help?
by TumsST

Mario has always battled Bowser, King of the Koopas. However, even Bowser needs some help from time to time. The year was 1990, and Super Mario 3 hit store shelves--and with it, one addition to the Koopa Troop. I'm talking about the Koopalings, Bowser's kids. Join me in taking a look back at some of the gaming moments the Koopa Kids have been a part of.

Like I said before, the year was 1990 and my favorite game, Super Mario 3, came out in the United States. The game brought us the likes of the Pipe Maze and the Tanooki Suit. It also brought us an addition to the King Koopa family, the Koopalings. The Koopalings took over each of the seven areas of the Mushroom Kingdom, and terrorized the kingdom and the king. They include: Lemmy, Iggy, Ludwig Von, Roy, Wendy O, Morton Koopa Jr, and Larry. They were named after popular rock and roll personalities of the time. They were also a major part of the cartoon series based on Mario 3. Mario 3 is one of, if not my favorite, game in the Mario franchise. 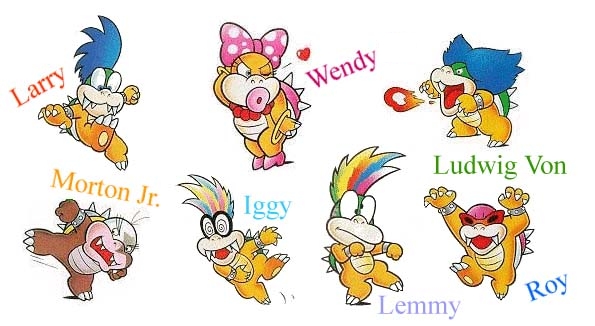 Late in August of 1991, Super Mario World was released and in it, the return of the Koopalings. Dinosaur Land was King Koopa's next desired land for conquest, and the Koopa Kids were put in charge of a castle in the seven locations in Dinosaur Land. The battle styles varied among the Koopa Kids, though them had similar attacks. The game also had an animated series based on it, which didn't last long, but I liked it. Super Mario World brought the world Yoshi, and we're grateful for that. It also brought Mario into the 16-bit era, and he hasn't skipped a beat since.

It was a pleasant surprise to see the Koopalings back in the Mario-verse, and Nintendo must have agreed since the Koopa Kids were in the Wii U New Super Mario Brothers U, and will be part of the new Mario Kart 8 for Wii U as new Drivers. As a fan of the Koopalings, I can't wait to see what they have in terms of driving; like how weights will be distributed for each Koopa Kid.

Now I know what you're thinking, "What about Bowser Jr.?" I know that some feel Bowser Jr. is one of Bowser's kids. Time to check history. The first sighting of Bowser Jr. was Baby Bowser in Yoshi's Island. He was just Bowser as a baby to go along with Mario and Luigi as babies. Then some time passed, and Bowser Jr. was his own character different from Baby Bowser. That would make Bowser Jr. a different character as well and one of Bowser's kids, separate from the Koopalings. I think the only thing I've come up with from this is that I'm thinking way too much into this.

To conclude, the Koopalings are part of the Koopa Troop and a part of Bowser's family. It's hard to comprehend at times because you never see a Mrs. King Koopa, but now I know I'm thinking too much. From Giant Land to Dinosaur Land and everywhere inbetween, the Koopa regime is seen all throughout the Mushroom Kingdom. Mario, Luigi, and Company have their hands full at times, but they get the job done. Now how will the Marios deal with the Koopalings while driving go-karts? Only time will tell!