The Descent has a solid story, some gorgeous scenery but some gameplay flaws hold it back from being a must buy DLC.
by Dalton White I

The most recent DLC for Dragon Age Inquisition has a solid story, gorgeous new underground environment and new equipment to collect; however it is not the perfect journey.

The DLC becomes available after the main story quest "In Your Heart Shall Burn" and requires power to unlock. Unusual earthquakes are causing mine shafts to collapse and threatening the world’s lyrium trade. Naturally your Inquisitor investigates and meets two dwarves named Valta and Renn, who believe that a mysterious “Titan” might be behind the quakes. Your Inquisitor and their party of heroes must travel down into the Deep Roads and beyond. The story is pretty well-paced, although its plot "twists" are not exactly surprising. Still, I felt rather satisfied with the story once I finished the DLC after about four hours. 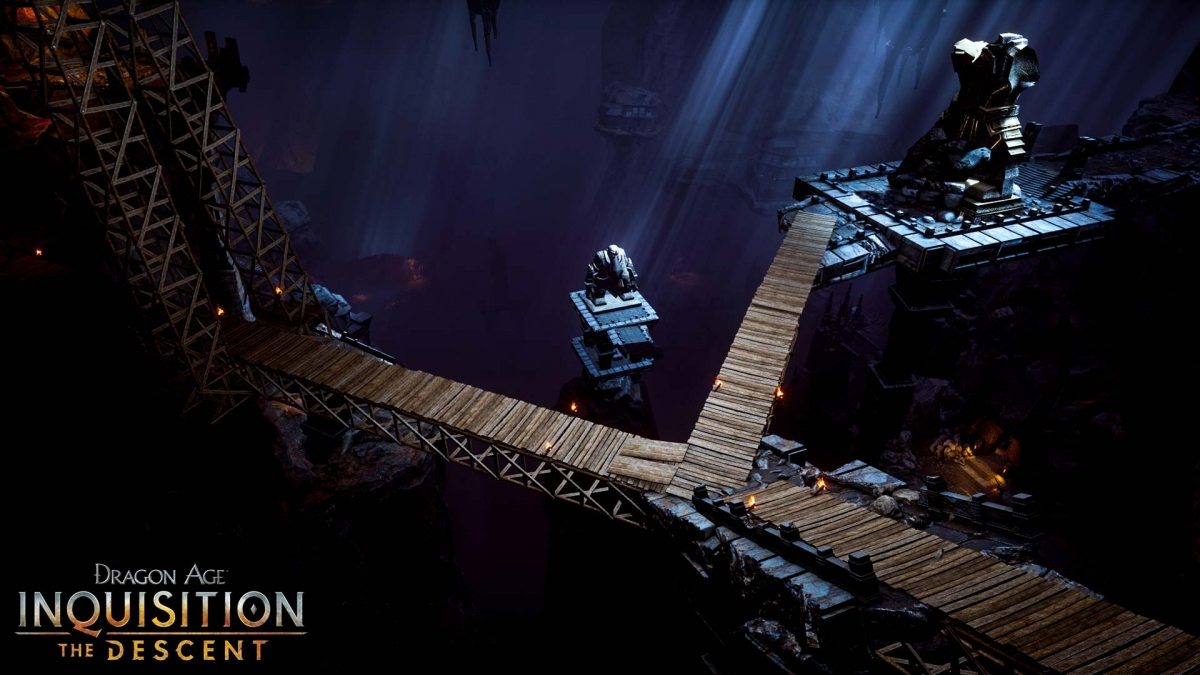 The Deep Roads are just waiting for you to explore them!

Side Missions and New Equipment Galore:

While you traverse the underground tunnels of the Deep Roads, you can find multiple projects that need to be completed, as well as areas that can only be unlocked by the unique expeditions that can be accessed from a hub camp. Expeditions require your Advisors to complete, and unlock treasure troves and sections of side quests. The side objectives are not exactly clear about what needs to be accomplished, but the rewards are definitely worth the effort.

The Deep Roads have new weapons that are infused with lyrium so they're stronger than most weapons you can find outside of this DLC. The side quests also provide a lot of experience, which can make leveling up rather easy. That is definitely a plus, because the enemies and the hordes of Darkspawn are relentless and in large supply as you journey deeper into the mines.

Dragon Age: Inquisition’s combat gameplay is pretty solid and very fluid. Battles in The Descent are numerous and help liven up the gorgeous halls and pathways in the Deep Roads. The main flaw in the hordes of Darkspawn is that all of the Darkspawn enemies are the same level as your Inquisitor. This normally would seem like a good challenge, but there are two points in the game where enemies will continually spawn if the targeted Darkspawn are not defeated. Since these targeted Darkspawn are the same level as you, they take forever to defeat.

Not to mention that the targets are the new Darkspawn varieties that can deal power ranged/magic attacks, or are giant hulking brutes who can kill you and your party in one attack. Even if you try to retreat and heal up, the continuous horde of weaker Darkspawn, which are also the same level as your Inquisitor, will swarm and finish off your weakened party. There are resupply points for healing potions, but they are either spread too thin where you need them or too close together in sections where they are not necessary. In order to get past two spawn points I had to move the difficulty down to Casual, which is frustrating and took away from the experience.

These smallfry are easy to deal with, but not when they endlessly respawn.

Although it has a solid story, a vast new area to explore, and multiple sidequests for you to complete, The Descent has some issues that need to be addressed. Hopefully BioWare will release an update that either lowers the re-spawn rate of the Darkspawn or makes them weaker than your Inquisitor. One area that was slightly covered was that some of the party members do have some unique dialogue during transitions between the various levels of the Deep Roads and the rare quip during battles, but otherwise there is not much time given to your comrades-in-arms. It is not as big of a problem as the Darkspawn, but it would enhance the experience if you got some time to hang out and chill with your party members. In the end The Descent is a decent DLC that is a solid all-around experience but has one glaring flaw that does not quite make it worth the fifteen-dollar entrance fee. If you enjoy the world of Dragon Age: Inquisition and want to see more of it, this DLC does provide. But maybe waiting for it to lower in price might not be a bad idea.

Our Rating
8
The Descent has a solid story, some gorgeous scenery but some gameplay flaws hold it back from being a must buy DLC.
Reviewed On: Playstation 4
What Our Ratings Mean