How to Kill the Pumpkin Kingpin In TK Baha's Bloody Harvest: Borderlands 2

TK needs you to kill the Pumpkin Kingpin? No problem!
by Raven Hathcock

TK Baha's Bloody Harvest, the first of the Headhunter pack that Gearbox is trying, released early this week. You know me; I had to get it as soon as I got out of class. The Headhunter packs are very different from the first season of Borderlands 2 DLC. They are shorter and cheaper, so keep that in mind.

The DLC overall is pretty easy. My level 44 mechromancer handled it fairly well until we reached Pumpkin Kingpin, the boss. He's a pumpkin, made of pumpkins and he regenerates with other pumpkins that spawn from a red liquid that looks like blood... yeah, it doesn't make much sense.

Now everyone has their own way of dealing with bosses, so remember that while reading my how-to! Here are somethings to consider while taking down the Kingpin.

Pumpkins Are Not Your Friend.

If you didn't already know this, the pumpkins are not there to help you. Pumpkin Kingpin summons other pumpkin dudes to help him regenerate life, and believe me, it gets annoying.  Look out for little guys with white exclamation points over their heads. These are the ones that are about to make their way up the Pumpkin Kingpin and undo all the hard work you've done.

I'm a huge fan of rocket launchers, and my love of rocket launchers really came in handy this boss fight. Whenever a new pumpkin would climb up the Kingpin near his face, I would shoot my Creamer (Yes, I mean the gun you got from Moxxi during the Loot Hunt). It kills the smaller pumpkins immediately and then does massive damage to The Pumpkin Kingpin.

It's a Halloween themed DLC, so of course there is some candy involved! There are different colored candies that give you different buffs.

All of these candies are helpful, it all depends on what you really want to focus on. I wanted to make sure I had enough rocket launcher ammo, so that's why I used a lot of the Fruit Punch "Supplies." The Lemon Fizz can help you outrun the pumpkin bombs that the Kingpin throws. Seriously, everything helps during this boss battle so do not ignore the candies. 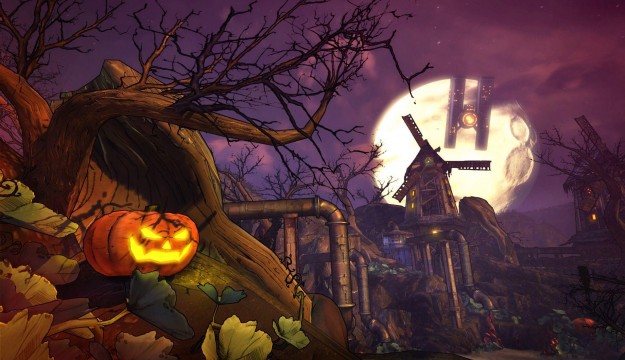 Although it may seem simple, the Pumpkin Kingpin was one of the hardest bosses that'd I've had to deal with. His regeneration can get a little out of hand, so make sure to eat your candy and get rid of those pesky pumpkins.