Ben Falcone, creative lead at Endnight Games, spills his guts about The Forest.
by Alex D&#039;Alessandro

The summer months are beautiful, aren't they? Lazy days under the canopy of a sycamore tree, reminiscing about a lost love or that night you'll never forget. Those camping trips deep into the forest, counting as many stars as your attention will let you. Realizing that some weird naked people are following you around with flashlights taped to the tops of their heads...Yeah, the living is easy.

Ben Falcone is the creative lead over at Endnight Games, the indie darling that has caused some serious ripples in the survival horror genre with their in-development hit, The Forest.

GameSkinny had a virtual sitdown with Mr. Falcone about all things bloody, scary, and cute.

GameSkinny: The Forest has really impressed gamers since its May 30th public release. Before The Forest was released, Watch Dogs was the top contender on the Steam sales chart, but only a few days later The Forest was Steam’s top seller. Why does your brand of survival horror speak to gamers more so than a AAA game might?

Ben Falcone: We were really surprised to release at number one on Steam, especially right after Watch Dogs. We’ve tried to capture the feel of playing in the woods, building a fort, finding a rock and throwing it and then fighting against an enemy threat. The openness of the game and the freedom you get as a player really lends itself to YouTube playthroughs and we credit most of the success of the game so far to the amazing videos people have been making.

We want players to eventually build up a stash of weapons, cover themselves in armor and the take on the enemy directly, find their missing kid and try to escape the forest.

GS: You’ve stated that a far range of films and games have helped influence The Forest: from Disney films and Minecraft to Cannibal Holocaust and Don’t Starve. Juxtaposition is clear from the onset of The Forest, and the game seems to love teasing players with beautiful vistas only to have them ambushed a few seconds later. How do you keep the players interested in exploration and experiencing the beauty of The Forest while delivering that sense of doom as soon as night falls?

BF: The vision was always to make this really beautiful, interesting world, and then try to use that as a base to scare people. Originally the plan was to only have enemies come out at night, but we’ve found the scariest moments come when you don’t expect the enemies at all. Lots of horror games are set in dark scary locations and it seemed like an interesting idea to try something scary above ground in a pretty location.

GS: How important is a proper “endgame” to the experience of The Forest? Has it always been a larger goal that the team has kept in mind?

BF: It feels important to me, that there’s this open world, all these things you can do, but then also the option of going straight for the ending. Your son is missing. How do you find him, and what do you do to survive and find out what happened to him? I feel having just a pure survival game with no goal at all would eventually be tiring, and mixing the survival with the very subtle story is really interesting to us. We want players to eventually build up a stash of weapons, cover themselves in armor and the take on the enemy directly, find their missing kid and try and escape the forest.

Work together, or kill each other. It’s up to you.

GS: The mutants exhibit complex behaviors to say the least. Some will bluff charge you only to back away and stalk you from a distance, yet others will walk directly at you, scream, and presume to smash your skull into a chalky dust. What was the decision behind the complex set of behaviors that the mutants seem to posses, e.g., worshipping at early hours, patrolling, setting up communities, etc? Does adding a moral scale deter the players from killing every mutant they see?

BF: We wanted to try something different with the AI, and as a team we are always interested in games that try new ideas. From very early on we wanted to try and make these creatures feel alive and dynamic; not knowing exactly what they’re going to do or how they will respond in different situations makes them a lot more interesting and hopefully scary. GS: A co­-op mode has been in the works for sometime, according to most sources. Are there any details you could share about the cohabitation with other players and how that will change the dynamic of The Forest. Will your relationship with the other human player(s) necessarily be symbiotic?

BF: We’ve tried to make the world and game as dynamic as possible and feel having another human in there will only further this goal. Work together, or kill each other it’s up to you.

GS:  Aside from bug fixes and player feedback, what is an advantage of the “Pre­Alpha” public release? Do you worry that some players might be deterred from playing the full future release because of a possibly “buggy” first experience?

BF: It’s definitely a worry for us. We want players to have the best experience possible, and so for most players waiting until final is probably the best idea. Some players, however, really like providing feedback and help to the team, filing bug reports and being part of the development process. It’s also an interesting look behind the curtain for some players who are interested in possible careers in game development at some point, being able to see a game form over time is an interesting experience in itself, but a different one than playing a finished polished release.

GS: Occulus Rift — The graphical aesthetic of The Forest has a real visceral punch, coaxing players deeper into areas that they might normally avoid. Booming thunder rolls overhead, rain falls in sheets and pools on the ground, a flash of lightning reveals that you are being followed and then you realize you are surrounded. This game seems simultaneously terrifying and mesmerizing with the Occulus Rift. Why did you want to port The Forest to a VR headset?

BF: I’ve always been really excited about VR, 3D and the Rift. I was hoping to have Rift support in for the first version of the alpha release but so many other bugs and gameplay features took priority.We’re hoping to have a Rift version ready in time for the next dev kits and feel that will be a much better experience for players than using the current dev kit, which is limited in a lot of ways. When the VR does work well, and you do get lost in the world it can be a really amazing feeling, looking down at your feet and feeling like you’re actually standing in mud, or seeing a life-size cannibal run jump attack you which can be terrifying.

GS: Crafting and survival seem to go hand in hand, especially in video games. How deeply do you want the expand the crafting experience to aid the player all the while keeping a balance between skillful playing and white­knuckle panic?

BF: The goal has always been to make something that is really hard, really challenging for players, unless they play smartly, gather resources build weapons,using their wits to survive.We never wanted to make a fast twitch type game and hope as we balance the game, more attentive players will be able to survive for as long as they focus on making good decisions. We want making a series of bad decisions to ultimately lead to the players death.

GS: Since you have added rafts and houseboats as of V 0.03 are you alluding to the idea of being able to leave the island and explore somewhere behind your humble crash site? Could there be an even greater enemy than sharks lurking in the water? How large would you like to expand the realm of play in The Forest?

BF: Escaping the forest should be the eventual goal of most players, along with finding your missing son, but how exactly you escape isn’t something we want to reveal. 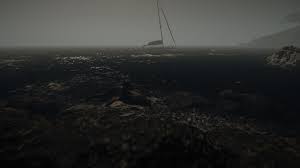 GS: How do you propose to keep the players interested and coming back once the island has been thoroughly explored and built upon? Are there limits to your character's actions?

BF: We hope the amount of randomness in the world will help with replayability. Co­-op is one place which will really help this, but even as a single player game it’s hopefully a different experience each time players enter the world. Adding more randomness and interesting actions to the creatures, having a bigger world to explore and more things to do will hopefully keep things fresh to players.

GS:  Are there any big changes or additions that you can hint to for the next update?

BF: We’re very close to having a brand new ambient lighting system working in the game, along with a rough pass of global illumination, combined they really bring the visuals together and drastically improve the look and realism of the world. Down the line, opening up new parts of the world and introducing new animals and more importantly the rest of the cannibal types is going to be really exciting and interesting to see.

The Forest Isn't Going Anywhere The capers and creeps of the The Forest aren't coming to end anytime soon. With continual updates being pushed out at a regular pace, The Forest will grow into something beautifully haunting - a true indie killer. If you agree, make sure to go over and read our breakdown of The Forest for our Dragon Slayer Awards; fan nominations for community games and personalities -- oh yeah, vote or die.

Born from the sticky swamps of Florida, Alex has enjoyed central air and shuffle board almost his entire life. Primarily a PC player as of late, Alex grew up on the classic Nintendo and Playstation home console system, honing his patience with a razors edge.